Ongoing efforts to control the coronavirus disease 2019 (COVID-19) pandemic led to sharp declines in output and employment across the major developed world economies for a third successive month in May, according to the latest business survey data, but rates of decline showed a welcome easing, in part due to some lifting of virus containment measures. 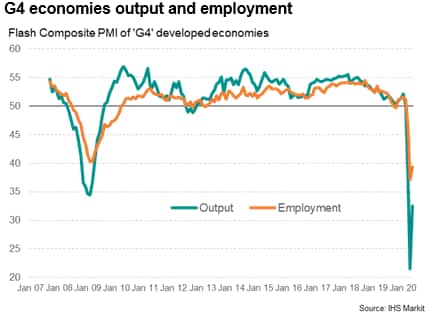 IHS Markit's 'flash' PMI (Purchasing Managers' Index) surveys provide the first internationally comparable insights into business conditions each month. The surveys had shown record declines in output, demand and employment globally in April as countries ramped up their efforts to prevent healthcare systems from being overwhelmed by the coronavirus outbreak. Encouragingly, the early 'flash' data for May revealed a marked easing in the rate of decline of output across the 'G4' developed economies of the US, Eurozone, Japan and the UK, albeit with the rate of contraction remaining fiercer than any time seen prior to the pandemic (including even at the height of the global financial crisis).

The UK suffered the steepest fall in output in May, followed by Japan and then the Eurozone, though all four of the largest developed economies saw rates of decline cool compared to April. The US appears to have so far seen a relatively more muted drop in output since the virus outbreak: the US composite PMI has averaged 34.8 over the past three months compared to 29.8, 26.3 and 24.6 for Japan, the UK and the eurozone respectively. That said, all four are clearly still in steep declines. 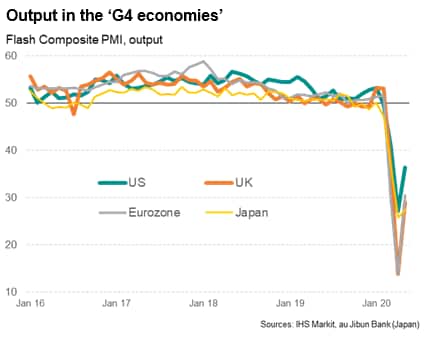 The variance in growth between countries can be in part explained by differing degrees of lockdown to fight the coronavirus. To gauge the impact of lockdowns, we use data compiled by IHS Markit which provides internationally comparable indices of COVID-19 containment measures. These indices allow us to see how aggressively measures taken to contain the virus have been applied in each country, and also how quickly they are being relaxed. The indices are based on information relating to issues such as closures of schools, non-essential shops and restaurants, as well as restrictions on public gatherings, internal mobility and external borders. We also forecast how these are expected to change in coming months, based primarily on government announcements

These indices, based on 100 meaning very severe restrictions and zero being no restrictions, highlight how the US and Japan locked down relatively less severely than the Eurozone and UK over the three months to May. The COVID-19 containment index averaged 51 in the US and 37 in Japan compared to 63 in both the UK and Eurozone. Unsurprisingly, tighter restrictions consequently appear to have resulted in greater economic damage. 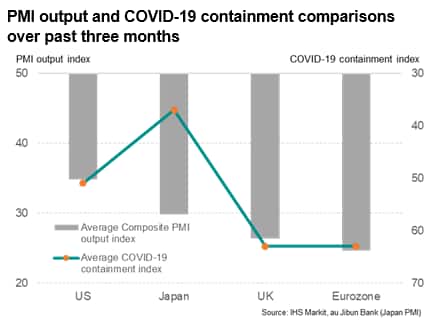 However, Japan appears to have seen a greater economic collapse than its containment suggested would have been the case. This is perhaps due to Japan's population having been more disciplined at voluntary social distancing than other countries, as well as Japan's greater exposure to Asian trade.

It's a different story with employment, however, where the US - with its flexible labour market - appears to have suffered a disproportionately large hit to employment relative to other countries. In Japan, by contrast, the looser COVID-19 restrictions have had a commensurately more modest impact on employment. 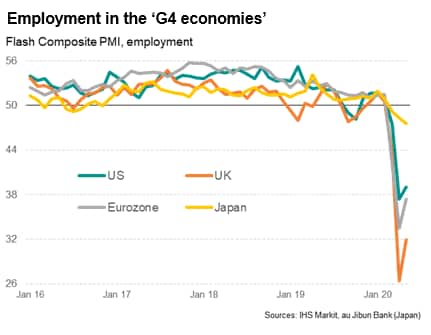 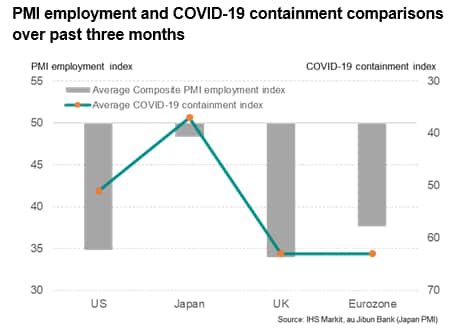 The good news going forward is that, barring any second waves of infections, all major economies look set to loosen coronavirus restrictions further in coming months according to government 'road maps', which should help lift the PMIs further as we move into the second half of the year (see charts).

However, as the charts also highlight, at least some containment measures are set to be retained in all countries through to the end of the year, and likely into 2021, unless an effective treatment or vaccine for COVID-19 is found. These restrictions will inevitably limit growth of demand and employment as economies try to recover, meaning returns to pre-pandemic levels of GDP and employment look set to be frustratingly long in all cases. 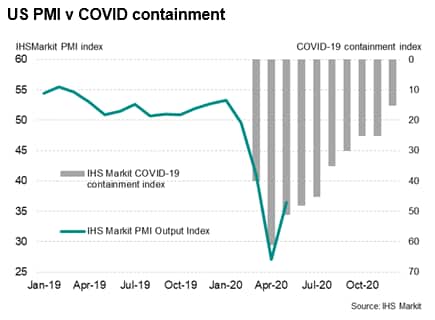