The world's largest developed economies showed a further marked easing in the rate of decline in June amid another relaxation of restrictions designed to control the coronavirus disease 2019 (COVID-19) pandemic. Although output fell across the 'G4' developed economies, according to provisional 'flash' PMI data, the rate of contraction moderated sharply for a second successive month, rising to a level historically consistent with global GDP returning to growth on an annual basis. 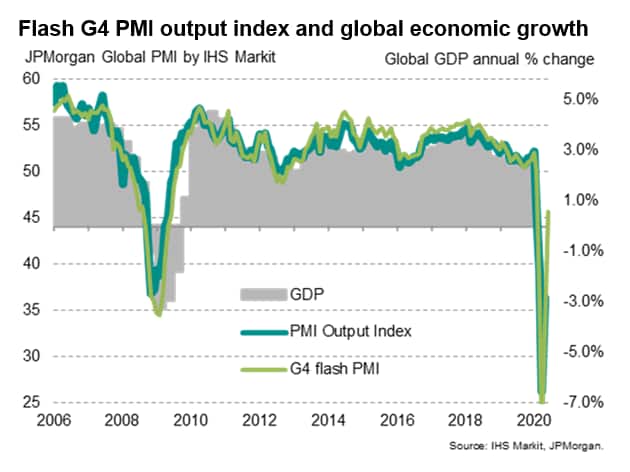 The IHS Markit Flash PMIs are early releases of survey data based on around 80% of the total number of replies usually received during a month. As such, they provide the first, internationally comparable, insights into how economic conditions are changing. Currently, flash PMI are produced for the United States, the eurozone, Japan, the United Kingdom and Australia, encompassing manufacturing and service sector business conditions in each economy. These survey data can in turn be weighted together according to each country's GDP to form international aggregates. Weighting the US, eurozone, UK and Japan PMIs together, for example, creates a "G4 developed world" series of indicators, covering output, new orders, employment, inflation etc.

Because these four largest developed economies account for approximately half of global GDP (at market prices), the G4 flash PMI output index acts as both a good indicator of the Global PMI as well as global GDP growth. Since 2007, when IHS Markit's US PMI series were first included in the global PMI database, the flash PMI has exhibited a 94% correlation with annual percent changes in global GDP with the PMI acting with a lead of one quarter. Using regression analysis, we can infer a rate of GDP growth from the PMI.

The G4 economies' flash PMI output index surged by a record 12.4 index points in June, building on a prior record leap of 11.7 points in May to push the index up to 45.7 from an all time low of 21.5 in April. While large, the rise is not particularly surprising: April saw vast swathes of these economies locked down to prevent the spread of the coronavirus, with these restrictions being gradually lifted in prior months. However, many restrictions remain in place, which goes some way to explain why the PMI remains below the 50.0 'no change' level, which indicates that more companies continue to report falling activity than report an increase.

More encouragingly, the historical relationship of the flash PMI with global GDP suggests that the latest reading of 45.7 is in fact broadly consistent with the global economy growing 0.2% on a year ago. While meagre by historical standards, such a return to growth represents a swift turnaround in economic performance from the height of the pandemic in April.

The service sector saw the mildest decline in June, but had also suffered the steepest downturn at the start of the second quarter amid widespread social distancing restrictions, which hit sectors such as travel, tourism, hotels, restaurants and high streets especially hard. While some of these service-based companies have seen activity start to pick up, many remain closed and have struggled amid dwindling demand as joblessness rises.

Many other parts of the service sector, notably the vast business-to-business services sector - which did not face the same degree of business closures as consumer-facing companies - have likewise reported tough trading conditions amid subdued demand. The overall drop in G4 economies service sector output was nevertheless the weakest since the lockdowns began four months ago, thanks primarily to the lifting of some of the restrictions. 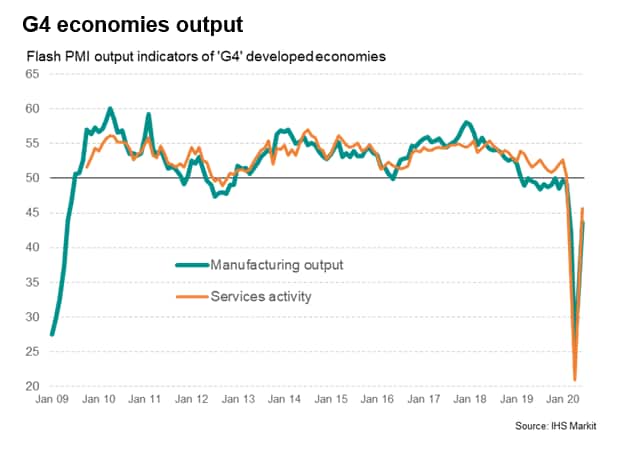 In manufacturing, many factories closed at the height of the pandemic in April while many others scaled back production capacity. The reopening of many companies has therefore helped lift the G4 economies' PMI manufacturing output index from an all-time low of 25.5 in April to 43.6 in June. 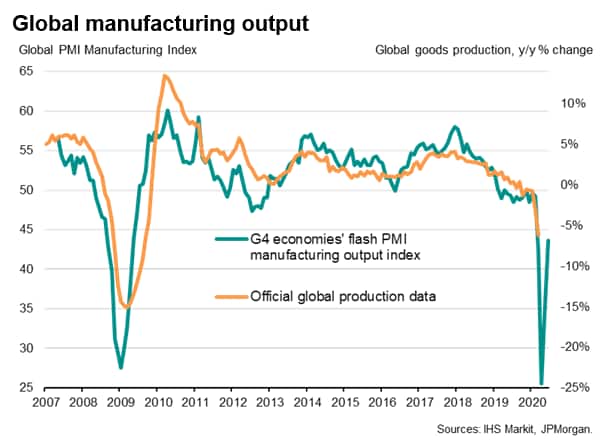 However, even at this improved level, the manufacturing index points to more companies reporting lower production than an increase in June, and remains historically consistent with global manufacturing output falling in year-on-year terms, albeit at a greatly reduced rate compared to that seen in prior months.

Looking at the four largest developed economies, the UK saw the mildest downturn in output, followed closely by the eurozone and then the US. France even saw modest return to growth, buoyed by rising domestic demand. Japan trailed behind, being the only economy to see an increased rate of manufacturing output contraction as weakened global trade flows continued to weigh on factory activity. Japan also reported the steepest ongoing decline in service sector activity.

However, looking over the second quarter as a whole, it is the UK that has suffered the largest drop in output, followed by the eurozone and Japan. The US has recorded the mildest decline. 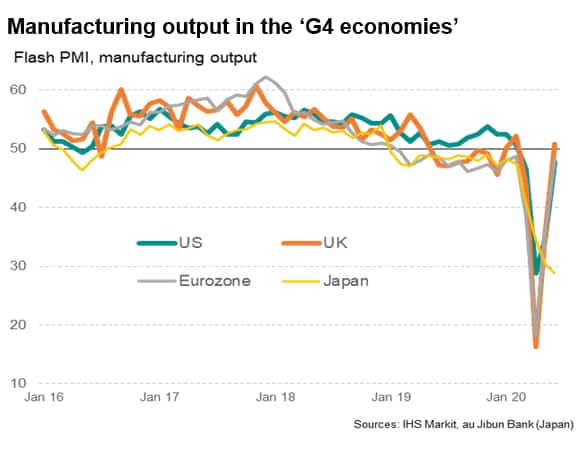 In terms of anticipating recovery speeds in the months ahead, the further planned relaxing of COVID-19 containment measures should help bring the PMIs into growth territory in the third quarter, barring any further waves of infections, which at this stage remains a non-insignificant risk. The easing in IHS Markit's Global containment index (which takes a basket of restriction measures in each country to gauge the degree of 'lockdown'), from a peak of 58 in April to 39 in June and 31 in July, bodes well for business activity to recovery some of the lost ground. We note, though, that the PMIs need to rise commensurately higher than 50 to make up for any drop below 50 in prior months before any lost output is recovered. Given high levels of unemployment, such strong growth may prove difficult to achieve. 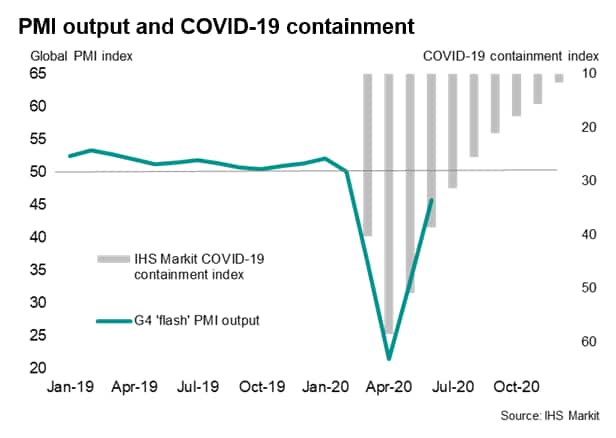 As well as COVID-19 containment measures, labour markets will therefore be important in determining recovery speeds. The flash PMI employment index showed an encouraging easing in job losses across the G4 developed economies for a second successive month in June, with headcounts being trimmed at the slowest rate since employment began falling in March.

The steepest loss of jobs in June (and in the second quarter as a whole) was recorded in the UK, followed by the eurozone, with far more muted declines seen in the US and Japan, the latter seeing an especially modest degree of job cutting.

Importantly, in all countries, government support has so far helped limit job losses, meaning a further wave of redundancies could follow in many countries unless demand rises sufficiently to sustain current staffing levels. 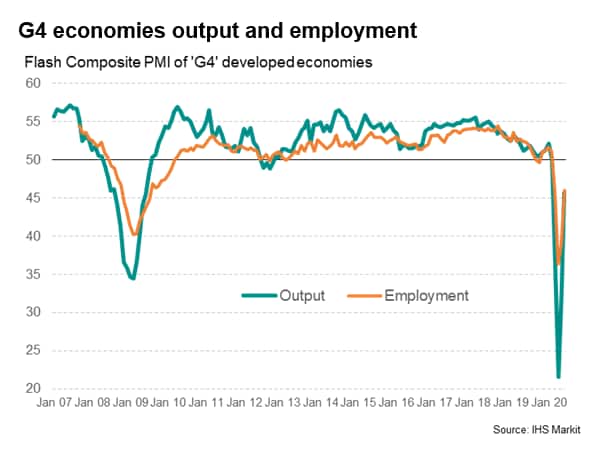 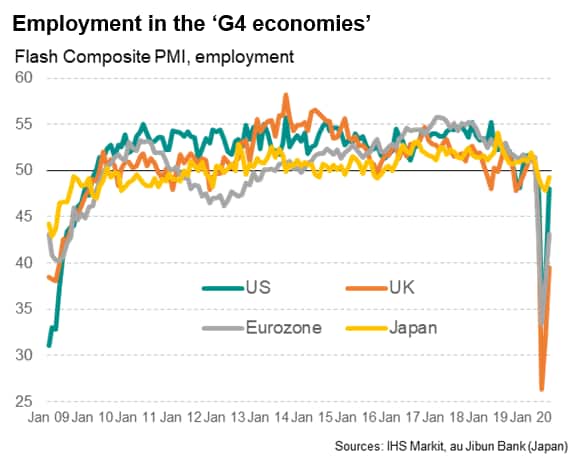