IHS Markit's flash PMI surveys for the 'G4' developed economies indicated that the pace of economic growth slowed at the end of the third quarter as the COVID-19 pandemic continued to cause widespread economic disruption.

While the data add to evidence that the global economy rebounded sharply in the third quarter after the unprecedented collapse seen in the second quarter, at the height of the COVID-19 pandemic, the latest numbers also hint at the global economic rebound losing some momentum.

Flash PMI surveys for the four largest developed economies (the US, Eurozone, Japan and UK), which collectively account for approximately half of global GDP, indicated further growth in September, but also signalled that the expansion lost some of its momentum. The G4 economies' flash PMI output index* fell from 52.6 in August to 51.6 in September.

Note that the decline in the index merely points to an easing in the rate of expansion rather than a contraction. The historical relationship of the flash PMI with global GDP suggests that the latest reading is broadly consistent with the global economy growing at an annual rate of 2.2%, down from a signal of 2.6% growth in August.

Note also that this does not mean GDP was 2.2% higher than a year ago in September, but merely indicates that the global economy is expanding at a rate equivalent to 2.2% per annum. At such a modest pace, it would take many months, if not years, to recoup the huge loss of output that occurred during the height of the pandemic, when lockdowns in many countries led to record low PMI readings. 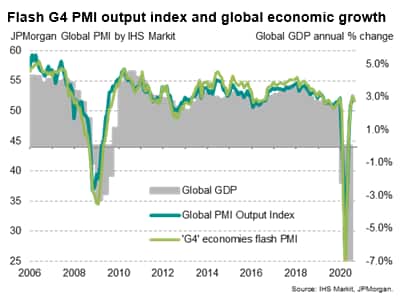 The peak of the rate of decline appeared in April 2020, coinciding with strict lockdowns and enforced closures of non-essential businesses across many countries. Since July, however, rising output has been recorded in the G4 economies, and in the wider global economy, as the lockdowns have eased, though the September flash data reflected a pull-back in business activity in many sectors as COVID-19 restrictions were either not relaxed (as had been previously planned) or tightened in the face of second waves of virus infections.

IHS Markit's Global COVID-19 Containment Index (which takes a weighted basket of restriction measures in each country to gauge the degree of 'lockdown') has fallen less than previously expected in August and September, reflecting a slower than previously planned re-opening of economies. For example, the index (for which readings of 100 signal full virus-fighting lockdowns and zero indicates no restrictions), has fallen markedly from a peak of 64 back in April, but at 32 in September is far higher than the level of 21 that had been expected for September based on government's plans to reopen their economies back in June. 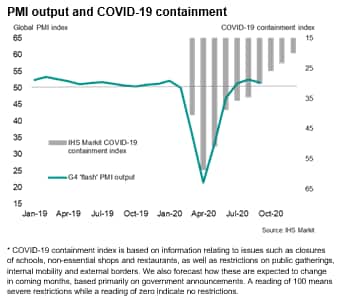 The reopening of economies has been especially slower than previously anticipated in all G4 economies, as rising infection rates have derailed the loosening of restrictions on social mobility and mixing. In all cases, containment measures are expected to at least remain stable through to the end of the year, but many governments continue to report that further containment may be necessary if infection rates rise.

Slowdown most evident in services

Given the ongoing measures to contain COVID-19, it was no surprise to see the slowdown most evident in services, and especially in consumer-facing companies, where the rate of expansion across the G4 economies fell below rates seen in July and August to slip below that recorded for manufacturing. The latter in fact saw output growth accelerate to the fastest snice October 2018, reflecting a combination of rising higher street demand for goods, growing trade and rising investment spending. 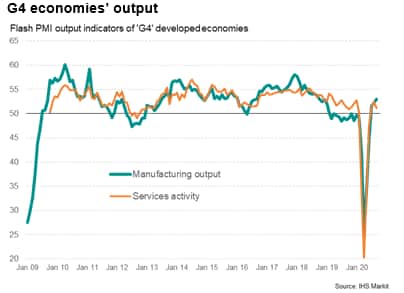 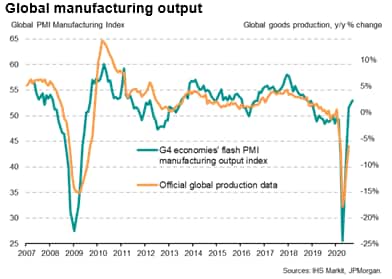 Given the broad-based extent of ongoing COVID-19 restrictions, it was not surprising to see growth rates across all G4 economies moderated in September with the exception of japan, where the economy remained in decline for an eighth successive month. At 45.4 in September, the au Jibun Bank composite PMI for Japan was nevertheless at its highest since February, suggesting a further easing in the rate of decline, though still indicating a continued economic contraction in the third quarter. Japan saw the worst performance of both manufacturing and services among the G4 economies.

The eurozone also fared especially badly, with the composite PMI sliding to 50.1 to indicate a stalling of the region's economic rebound from the collapse seen earlier in the year. The service sector fell back into decline, contracting in Germany, France and the rest of the region as a whole, offsetting improved manufacturing performance, which saw factory output rise at the steepest pace since February 2018, with especially strong growth seen in Germany.

Growth also slowed markedly in the UK, albeit with August having seen the strongest expansion for over six years. The slowdown was most evident in the service sector, in part due to the halting of the government's scheme to heavily discount meals eaten in bars and restaurants. Despite the slowdown, the UK nevertheless reported the strongest manufacturing and service sector expansions among the G4 (although, within the eurozone, Germany reported a stronger manufacturing expansion).

US growth remained relatively resilient, slowing only slightly from August to indicate a further solid expansion, though below that seen in the UK. As with the UK and Eurozone, the slowdown was driven by the services economy, where growth eased from the near one-and-a-half year high seen in August, while manufacturing output growth edged up to the highest in ten months. 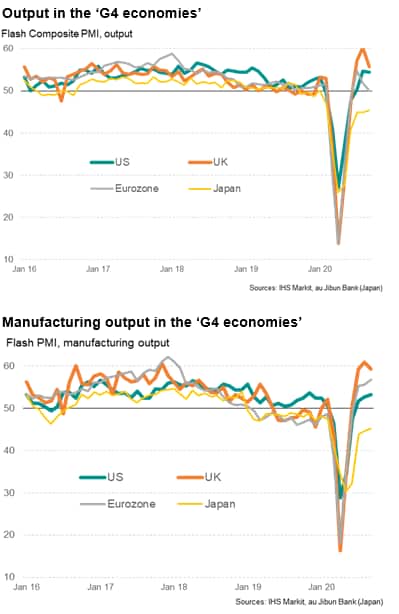 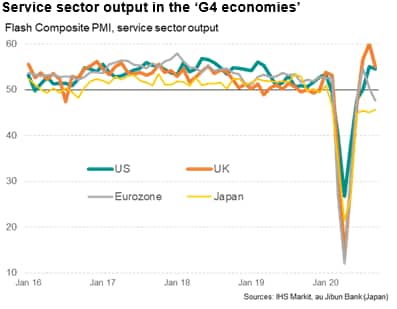 In gaining further insight into the strength and likely sustainability of the recoveries, it is also important to look at other survey indices as well as output. In particular, we look at employment and backlogs of work, the latter providing a useful guide to the extent to which companies are struggling (or not) with recent changes in demand.

Encouragingly, employment rose marginally across the G4 economies as a whole for a second month running in September, contrasting with the steep loss of jobs seen between March and July. This stabilisation of the workforce coincided with a steadying of backlogs of work during the month. In prior months, backlogs had fallen as firms often kept current operating capacity fully utilised only by eating into previously placed work. 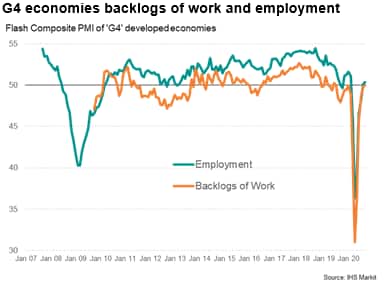 Again, however, divergences were important to note within the G4 economies. Rising employment was only evident in the US, which was also the only major economy to see backlogs of work increase to any significant extent. These gains hint that the US upturn appears to have longer legs than other G4 economies.

While the UK has seen the strongest output growth, concerns are raised by a further steep loss of jobs during September, as companies reported the need to scale back capacity and overheads. A steadying of backlogs of work in the UK bodes well for job losses to hopefully moderate in coming months, though much will depend on whether the government halts its furlough scheme as planned at the end of October.

Firms in Japan and the eurozone meanwhile saw backlogs of work and employment continue to fall, but rates of decline eased. As with the UK, these data hint that the worst of the job losses could be behind us, but much will naturally depend on the path of the virus in each country and the response in terms of virus containment measures and monetary and fiscal policy. In the US, the upcoming elections add an additional uncertainty to the outlook, while in the UK, Brexit poses an additional downside risk. 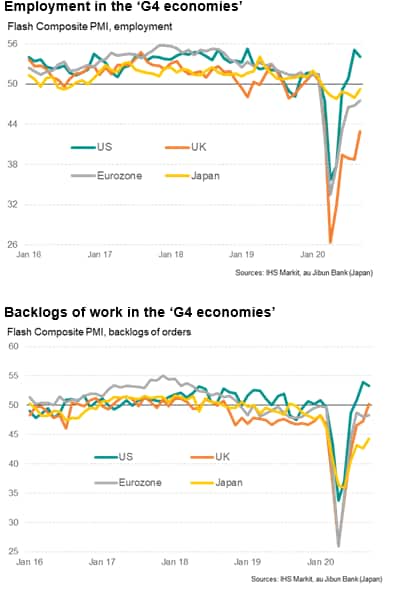 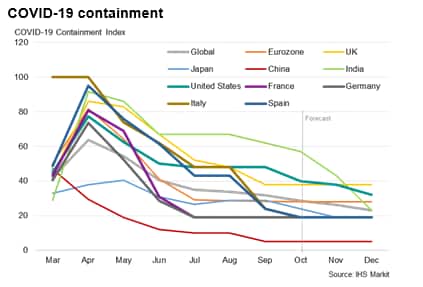 * The IHS Markit Flash PMIs are early releases of survey data based on around 80% of the total number of replies usually received during a month. As such, they provide the first, internationally comparable, insights into how economic conditions are changing. Currently, flash PMI are produced for the United States, the eurozone, Japan, the United Kingdom and Australia, encompassing manufacturing and service sector business conditions in each economy. These survey data can in turn be weighted together according to each country's GDP to form international aggregates. Weighting the US, eurozone, UK and Japan PMIs together, for example, creates a "G4 developed world" series of indicators, covering output, new orders, employment, inflation etc.

Because these four largest developed economies account for approximately half of global GDP (at market prices), the G4 flash PMI output index acts as both a good indicator of the Global PMI as well as global GDP growth. Since 2007, when IHS Markit's US PMI series were first included in the global PMI database, the flash PMI has exhibited a 94% correlation with annual percent changes in global GDP with the PMI acting with a lead of one quarter.