Renewed lockdown measures to contain a second wave of COVID-19 infections has caused the UK economy to slide back into contraction during November, according to the latest flash PMI data. Job losses also accelerated during the month, despite business optimism surging higher amid news of successful COVID-19 vaccine trials.

The flash IHS Markit/CIPS composite PMI, based on around 80% of normal monthly replies, slumped from 52.1 in October to 47.4 in November, signalling a deterioration of business activity after four months of expansion. However, the decline was considerably less severe than markets had been expecting, with a reading of 44.1 anticipated according to Reuters polling. Although hospitality sectors saw business collapse amid the new virus containment measures, some respite came in the form of a temporary boost to manufacturing from pre-Brexit stockpiling. 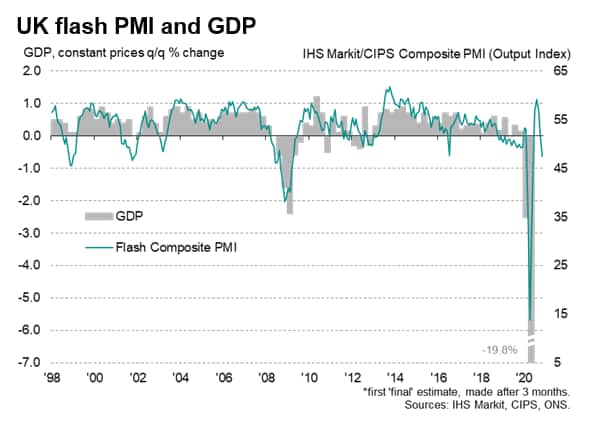 The decline takes the PMI's composite output index to a level historically consistent with GDP contracting at a quarterly rate of approximately 0.3%, but - as seen during the height of the first lockdown in the second quarter - the actual hit to GDP from enforced closures of many businesses may be considerably greater.

We are currently anticipating the economy to contract by 4.4% in the fourth quarter. While that would be considerably less than the 19.8% decline seen during the second quarter, it would be far greater than the 2.1% peak rate of contraction seen during the height of the global financial crisis. 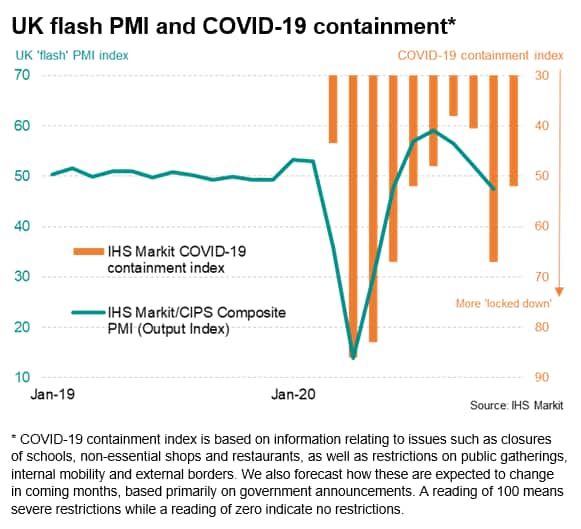 Looking in the detail of the November flash PMI, the decline was led by a collapse of business activity in the hotels, bars & restaurants sector amid enforced temporary closures, with other consumer-facing services, travel and transport also suffering steep drops in activity, albeit with rates of decline not quite as severe as seen during the spring lockdown.

Financial services activity meanwhile also fell for the first time since May and business service providers reported the weakest expansion since the recovery from the first lockdown began in June.

Total service sector activity consequently fell sharply, dropping for the first time since June. The sector's business activity index deteriorated from 51.4 in October to 45.8 in November. Although signalling a steep decline, that compares with a low of 13.4 plumbed during the height of the first lockdown in April to suggest that the impact of the lockdown has not been as severe as seen in the spring. 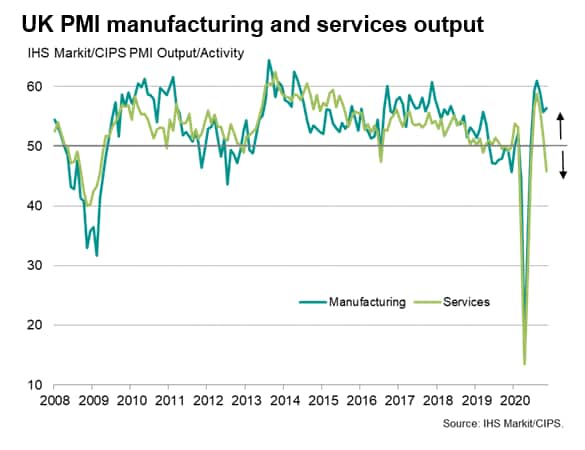 In contrast to the steep loss of output in the services sector, manufacturers reported faster production growth during November, albeit with the expansion often linked to a temporary boost from stockpiling ahead of the end of the UK's Brexit transition period on 31st December. Output rose for a sixth straight month, with the rate of increase picking up slightly, though remaining below the highs seen during the summer. The factory output index rose from 55.8 to 56.3, helping push the headline PMI up to 55.2, it's joint-highest in nearly three years. The manufacturing upturn was fuelled by a further marked increase in new export orders, which showed the largest monthly rise since January 2018. These export gains were linked to a combination of rising global trade flows, as economies continued to revive from COVID-19 lockdowns, but also to a temporary rise in purchases from EU customers ahead of the UK's departure from the EU free trade area on 31st December. Although just over one-in-four manufacturers reported higher exports in November, almost half of these firms attributed the improvement to pre-Brexit stockpiling by customers.

Similarly, exports of services fell at an increased rate in November, posting the steepest decline since June, reflecting virus containment measures both at home and abroad. 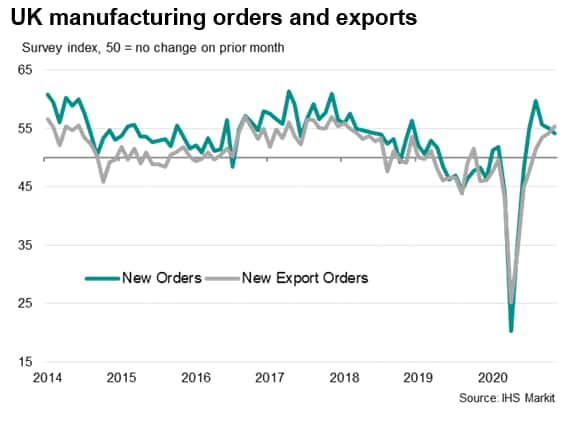 Brexit stockpiling reported by 16% of manufacturers

A rising number of manufacturers meanwhile reported that worries over Brexit led to increased stockpiling of inputs, which also temporarily boosted demand at firms supplying these inputs to other companies. Roughly 16% of manufacturers citied Brexit as the cause of higher stocks of inputs, which rose in November to the greatest extent since October 2019, ahead of the first Brexit 'deadline' which was subsequently postponed. 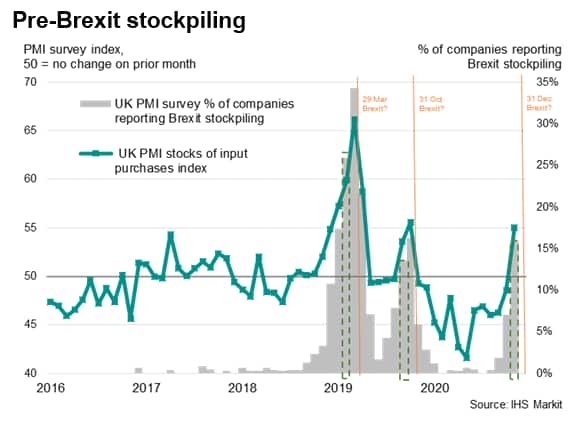 Future expectations at highest since 2015

More encouragingly, although business activity was hit in November by the fresh efforts to contain a second wave of COVID-19 infections, business expectations picked up to the highest since March 2015, buoyed in part by encouraging news during the month on the development of effective virus vaccines. Sentiment about the year ahead perked up in both manufacturing and services, with the latter not surprisingly seeing an especially marked improvement in the hotels, bars & restaurants sector. 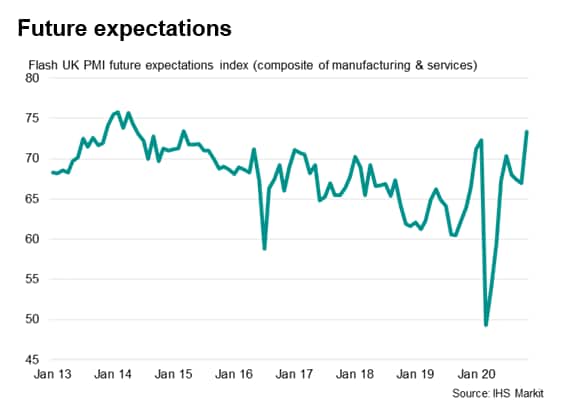 Disappointingly, the upturn in sentiment about the year ahead was not matched by increased hiring. In fact, job losses accelerated during the month to the fastest since August. Job losses in manufacturing eased to a nine-month low but remained high by historical standards, while headcounts were cut at an increased rate in the service sector.

Job cuts were blamed on a combination of weak demand, excess capacity and the anticipation of reduced government support via the furlough scheme, the termination of which was advertised as the 31st October but extended at the last minute alongside the announcement of the renewed lockdown measures. 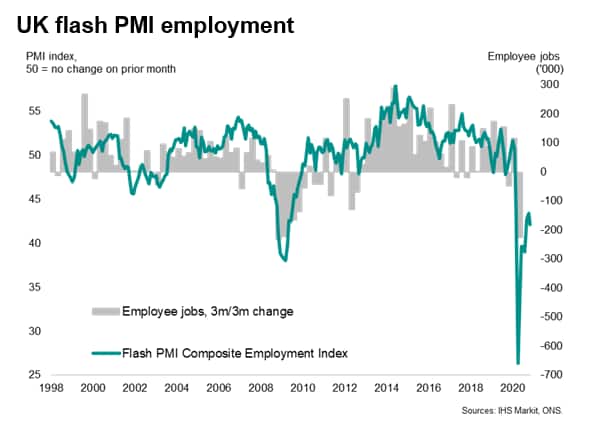 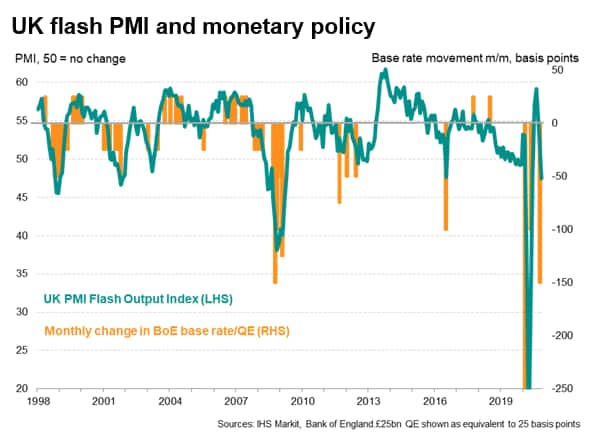