The Japanese economy saw encouraging signs in April according to preliminary PMI data. The fastest manufacturing output growth propelled the flash composite PMI above the 50.0 no-change threshold for the first time since the pandemic began. 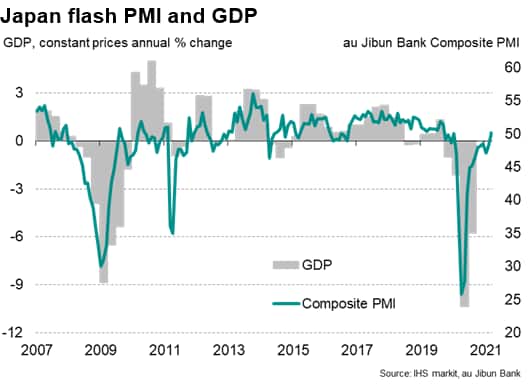 The flash au Jibun Bank composite PMI, compiled by IHS Markit and based on around 80% of normal monthly survey replies, rose to 50.2 in April from 49.9 in March. This signals the first expansion since January 2020, when the COVID-19 pandemic first hit the Japanese economy, and bodes well for the recovery at the start of the second quarter.

Large divergences by sector persisted, however, and became more pronounced in the April flash PMI surveys. The Japanese economy continued to experience a K-shaped recovery as manufacturing saw the largest gain recorded since January 2018, and one of best months in seven years. Services meanwhile remained in decline for the fifteenth consecutive month. 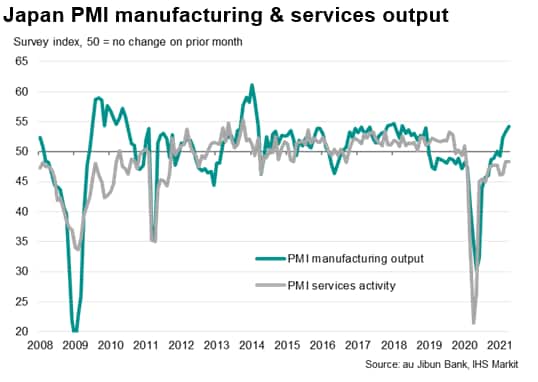 Divergence between the two sectors had been caused at least in part by COVID-19, according to the PMI survey anecdotal findings. In particular, rising infections and poor vaccination progress in Japan continued to hamper the services sector, especially in face-to-face consumer oriented businesses.

With Japan mulling fresh emergency curbs for Tokyo and other prefectures to tame the rise in COVID-19 cases, services performance may again deteriorate in the near-term. If confirmed, the April 25 to May 11 period will also cover Japan's "Golden Week" holidays.

Expansion in the private sector had been underpinned by the manufacturing sector, where output rose in April at the fastest rate for three years. Output momentum also improved further, as emphasised by a rising orders-to-inventory ratio. Factories are struggling to meet demand, leading to falling inventory and increasing backlogs in April. 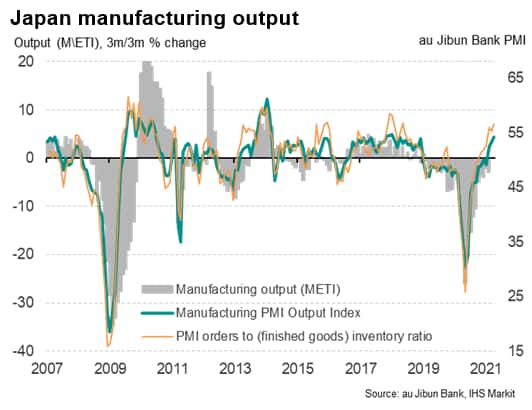 In contrast, services saw backlogs and inflows of new business still dampened by the deteriorating COVID-19 conditions in Japan and abroad. Exports of services were especially hard-hit, contrasting with the strongest surge in goods exports for over three years, reflecting travel restrictions.

The sector divergence had also been underscored by differing outlooks. While the positive outlook further improved for manufacturing, a less optimistic outlook was recorded for the service sector, with rising COVID-19 infections directly affecting activities such as travel, tourism, and domestic consumption.

Uncertainty caused by the rising COVID-19 cases just months ahead of the Tokyo Olympics was also reported to have led to continued cautiousness in hiring, as reflected in a renewed fall in the PMI's employment sub-index. 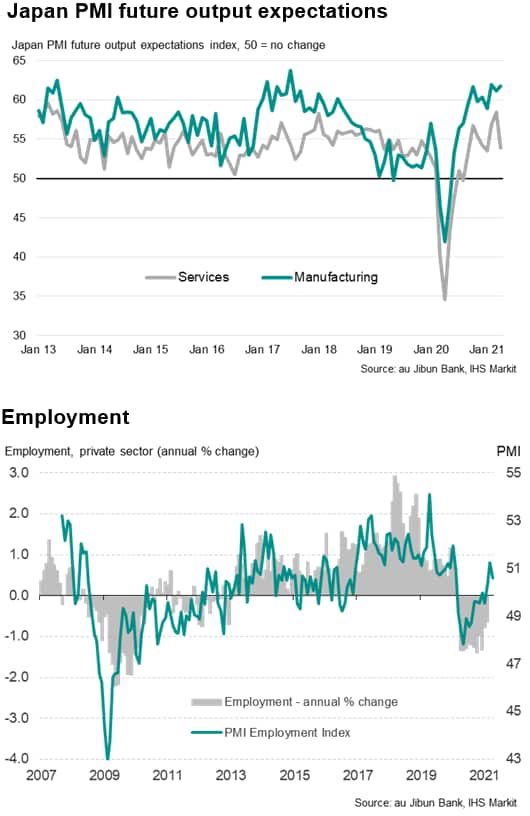 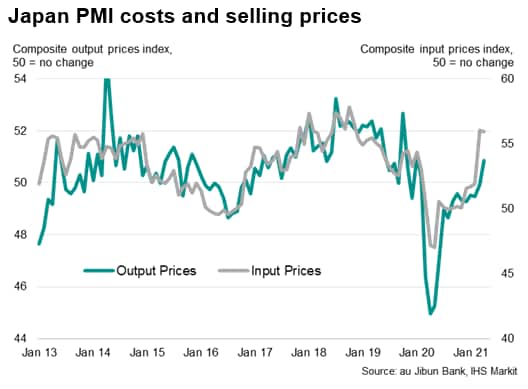 Input cost pressures declined only modestly from March, which had seen the largest input price inflation recorded since November 2018. While average prices charged for goods and services noticeably edged into inflation in April, the relative difference between input and output prices continued to point to squeezed margins for firms.

Following the recovery seen in the Japanese economy in the past months, as reflected through the PMIs, the BOJ may shift the FY2021 growth forecast higher. The diverging performance between the manufacturing and service sectors as highlighted, in addition to the pending state of emergency, may however lead the BOJ to be cautious with any upward revision to the growth outlook.

Perhaps more importantly, even the latest rise in PMI price gauges only hints at modest inflationary pressures, and many of these recent price increase could prove temporary once global supply and demand conditions come more into line. 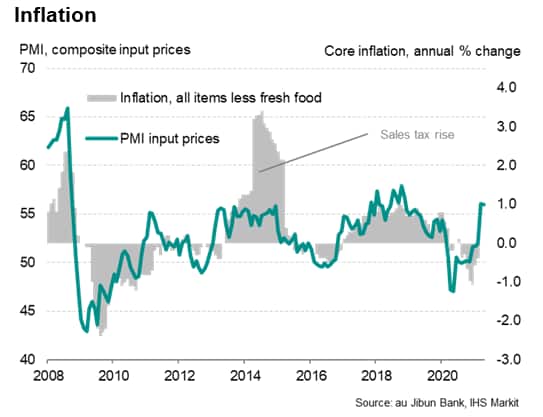 PMIs are a unique and valuable tool for businesses, governments, and investors worldwide. Read our latest paper on… https://t.co/rUyJihnHxt