The Japanese economy suffered a further substantial fall in business activity during May, according to the latest flash PMI results. The downturn reflected not only the extension of emergency measures taken domestically to contain the COVID-19 pandemic but also the collapse in global demand. The curbs on social and business activities continued to weigh heavily on sales across both manufacturing and service sectors.

Jobs were also cut at a rate unsurpassed for a decade as firms faced dwindling sales and sought to contain costs. Forward-looking survey indicators suggest a recovery in economic activity is still far off.

The headline au Jibun Bank flash Composite PMI, compiled by IHS Markit and covering manufacturing and services, was up slightly in May from 25.8 in April to 27.4, but by remaining well below the neutral level of 50 nevertheless indicated a further substantial decline after the record slump in April. The latest reading signalled the second-largest monthly decline in business activity since data were first available nearly 13 years ago.

The average PMI reading so far for the second quarter (26.6) points to a much deeper downturn than seen in the first quarter (44.4), and highlights the severity of the impact of COVID-19 measures, both home and globally, on Japanese economic activity.

The service sector continued to lead the economic collapse as restrictions on business operations and movements of residents heavily affected services activities, demand for which slumped further in May. While services output fell at a slightly slower pace than April, the decline in manufacturing production intensified during May, dropping at the fastest rate since the height of the global financial crisis in February 2009. According to panellists, output was constrained by material shortages and rapidly weakening sales. 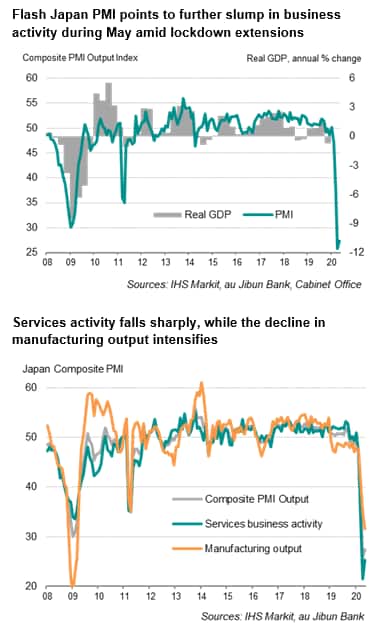 Demand conditions weakened further midway through the second quarter as COVID-19 measures continued to hold back spending from consumers and firms. Total new business intakes fell heavily in May, with the rate of decline exceeded in the survey history only by that seen in April. Sales were also hindered by a further deterioration of global trade demand, which led to a record fall in export sales. Manufacturers in particular reported an accelerated decline in overseas sales.

The survey data also showed worsening labour market conditions during May, mainly in the service sector. Overall employment fell for a third straight month, with the pace of decline accelerating to the quickest for a decade. Service providers recorded a sharper reduction of staff numbers. By contrast, manufacturers reported no change to employment levels after falling steeply in April.

Deflationary pressures were evident, especially in the service sector where rates of decline in both input costs and output prices were steeper than those seen in manufacturing. Lower expenses were primarily linked to reduced fuel prices and decreased wage bills.

The outlook for Japan's private sector economy remains dim. The survey's future expectations gauge continued to signal downbeat sentiments over the next 12 months, with firms expressing doubts of a recovery.

Any return to growth will be challenging. Even as the global economy is opening up, social distancing rules will be needed to avoid triggering a second wave of new coronavirus cases. The rise in unemployment and concerns over job security will dampen consumer demand, while the damage to the finances of business from lost sales - as well as uncertainty about the future - will constrain business investment. Extended border restrictions and travel controls will also hinder any meaning recovery in tourism.

Final manufacturing and services PMI data will be released on 1st and 3rd of June respectively.