The rebound in the Australian economy from COVID-19 lockdowns gathered pace in July, with business activity increasing markedly, according to flash PMI data, adding to hopes that the economy could return to growth in the third quarter. Survey data also showed demand improving sharply, leading firms to expect output to rising further over the next 12 months on balance, especially if COVID-19 containment measures continue to ease.

However, further recovery in the months ahead is by no means assured. The survey also indicated how external demand for Australian goods and services continued to deteriorate amid a weak global trade environment. Firms also remained reticent towards investing in new capacity as current workloads continued to be manageable despite a further rise in sales. Prices meanwhile hinted at weakened inflationary pressures. Input prices increased at a slower rate, while output charges were reduced on average due to efforts to maintain competitiveness.

The Commonwealth Bank Australia Flash PMI, compiled by IHS Markit and covering both the manufacturing and service sectors, rose sharply from 52.6 in June to 57.9 in July, indicating the fastest increase in private sector output for over three years.

Services continued to lead the recovery at the start of the third quarter. Growth in services activity accelerated to a record pace during July as the gradual reopening of parts of the economy following a relaxation of COVID-19 restrictions led to more businesses returning to work.

Survey data also showed a broadening of the recovery, with manufacturing output returning to growth in July, ending a ten-month period of decline. Companies reported that the lifting of restrictions and resumption of construction activity were factors behind the rise in factory production. 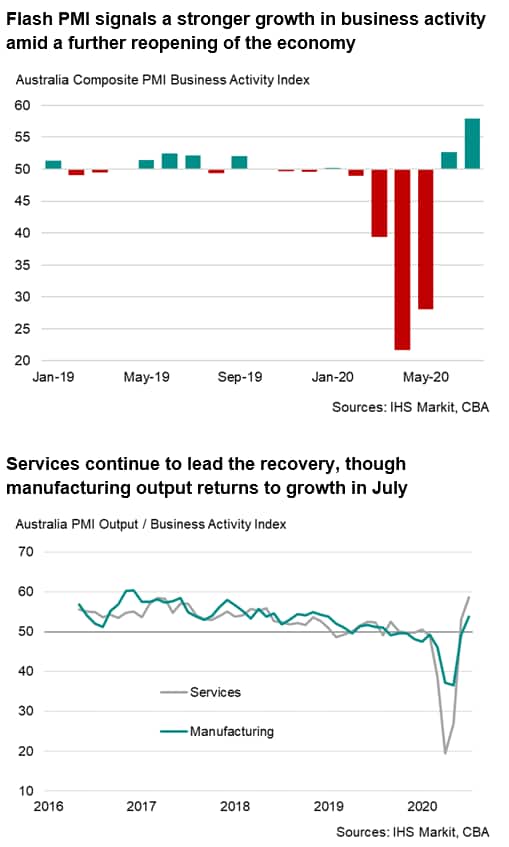 The rise in overall business activity was accompanied by a further strengthening in demand. Total new orders rose sharply in July, with the rate of increase the strongest for three years. Australian services continued to lead the improvement in demand while orders for manufacturing products returned to growth.

That said, the upturn in business activity remained driven by the domestic market while external demand continued to deteriorate. Export orders for goods and services fell for a sixth straight month, with the rate of decline intensifying from June, though not as severe as seen in April and May when lockdown measures were imposed in many economies globally.

Prices charged for Australian goods and services fell slightly in July on average after a marginal rise in June, in part due to increased competitive pressures and efforts to offer discounts to secure sales, notably in the service sector. Manufacturers recorded a milder rise in factory gate prices than the increase seen in June.

Input costs meanwhile rose further in July, but the rate of increase was noticeably softer than in the prior month and modest overall. Inflation was driven by a number of factors, including a relative weaker exchange rate, wage increases, higher freight fees and greater fuel prices.

Further recovery is far from certain

With Australia having overcome the initial impact of the lockdown measures to control the COVID-19 outbreak, the current rebound from a deep recession could be undermined by a surge in new infections. Even though companies remained positive about higher output in the year ahead on balance, this optimism is founded on expectations of a further easing of COVID-19 restrictions and an eventual return to normality.

Other forward-looking survey indicators cast doubts as to the strength of the recovery ahead. A stronger rise in sales has yet to result in an increase in capacity pressure. The survey data showed the level of backlogs little changed from June, as was the case in the prior month, suggesting that a much stronger pick-up in demand is necessary to sustain the recovery. Furthermore, with firms battling to stay in business and seeking to reduce costs, employment numbers were cut further in July, albeit at the slowest pace since February. Any further lack of capacity pressures will continue to dampen labour market prospects. 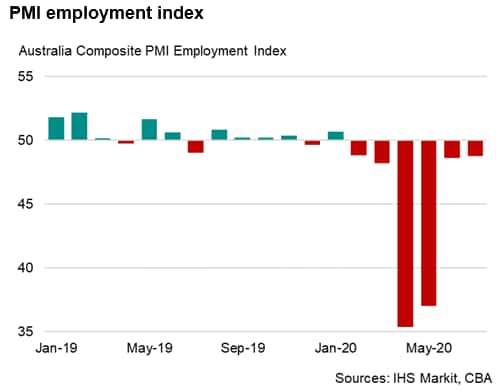