The downturn in Australia's private sector economy deepened markedly in March, according to the flash PMI data, raising the likelihood of a recession as increasing measures to contain the coronavirus disease 2019 (COVID-19) outbreak hit demand. With sales severely affected, spare operating capacity in the private sector built up quickly despite job shedding, all of which contributed to the lowest business confidence seen since the survey began nearly four years ago.

The Commonwealth Bank Australia Flash PMI, compiled by IHS Markit and covering both the manufacturing and service sectors, slumped from 48.3 in February to 40.7 in March, signalling the steepest contraction of business activity in the near four-year survey history.

The slide in the PMI raises the risk that Australia will slip into recession, especially as the second quarter could be far worse. Coming months will likely see countries around the world, including Australia, implement increasingly draconian measures to halt the spread of the COVID-19 amid over-stretched healthcare systems. 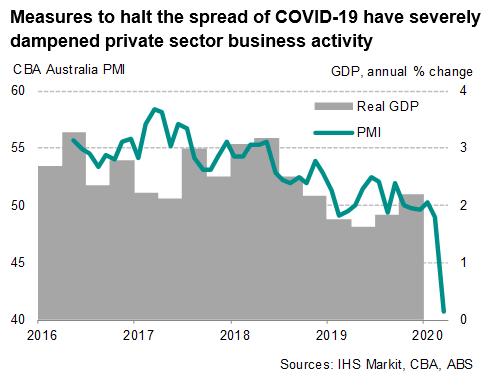 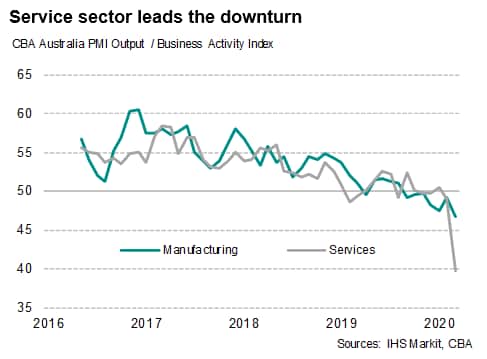 While the COVID-19 outbreak affected a wide range of industries in March, an especially steep decline was recorded in the service sector. Services business activity plunged to a rate not seen in the survey history as coronavirus-related countermeasures caused demand to collapse. The most affected were firms in consumer services, travel and transport sectors. There were also financial services firms reporting reduced activity, linked in part to the recent financial market volatility.

Manufacturing output also shrank at a record pace, accompanied by a sharp decline in new orders. Goods producers across the three main categories (consumer, intermediate and investment) were all affected by the downturn in demand as well as virus-related disruptions to supply chains. There were also reports of bad weather conditions weighing on the manufacturing sector. 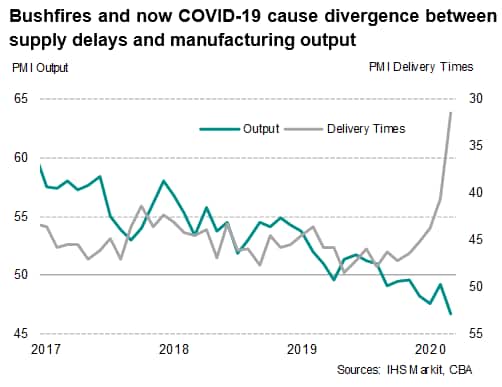 The factory shutdowns, work suspensions and travel restrictions in China continued to disrupt supply chains around the world in March, even as an increasing proportion of industrial firms were reported to have been restarting work. The March survey findings pointed to the longest lengthening of suppliers' delivery times on record. Material shortages due to the COVID-19 situation were by far the most common reason cited by firms that reported delivery delays.

In normal circumstances, the slump in demand would have offset any upward price pressures resulting from longer delivery times and shortages of raw materials. However, heightened fears of a global recession brought about by greater uncertainty surrounding the virus pandemic saw strong demand for the US dollar, leading to the Australian dollar falling to a 17-year low against the greenback. The sharp depreciation of the Australian dollar consequently contributed to greater imported inflation. Survey data showed that manufacturing input prices rose to the greatest extent for nearly one-and-a-half years. By contrast, service sector costs increased at weaker pace in March, reflecting lower fuel prices and reduced staff costs due to layoffs.

Average prices charged for goods and services meanwhile increased marginally, among the weakest in the near four-year survey history, as weak demand limited firms' pricing power. 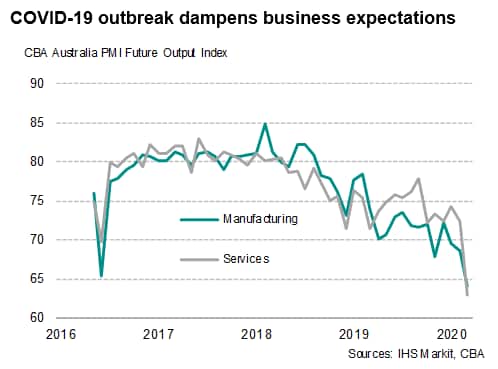 Business expectations for the year ahead also reflected increasing signs of distress. The Future Output Index sank to its lowest since the survey started in May 2016. The weakening in business confidence was notably sharper in services than the manufacturing sector, with the former seeing a near ten-point slump. Pessimistic firms were primarily concerned over the impact of COVID-19 on their future business activity.

The Australian government had announced on 22nd March a second - and larger - fiscal stimulus package of AUD 66 billion that dwarfed the first AUD 17.6 billion plan. With the flash PMI survey data collected between 12th and 19th March, and the second fiscal plan approved by the parliament on 24th March, we can expect to only see the initial effects of the larger stimulus package in April, contingent also on how quickly the measures are implemented.

That said, the increasing tough measures in Australia and globally to fight the virus are expected to dampen demand further in coming months, implying that the full economic damage from the coronavirus has yet to be seen.