Early PMI survey data showed economic output contracting in the US and Eurozone during July, with growth meanwhile slowing in both the UK and Japan. Collectively, output across these four largest developed world economies consequently fell for the first time since June 2020. If pandemic months are excluded, this was the worst developed world economic performance for a decade.

Forward-looking indicators, such as new orders and the orders-to-inventory ratio, suggest the deterioration in output growth could gain further momentum in the remainder of the third quarter.

Although inflationary pressures remained elevated, weaker demand led to an alleviation of supply constraints and lower price pressures. Average selling price inflation for goods and services fell in all four economies as a result.

The July flash PMI coincide with a significant tightening of financial conditions as central banks raise interest rates to fight off decades-high inflation. Such rate hikes threaten to push economic activity further lower in the coming months, but the cooling of price pressures already evident may help to moderate the pace of rate hikes later in the year. 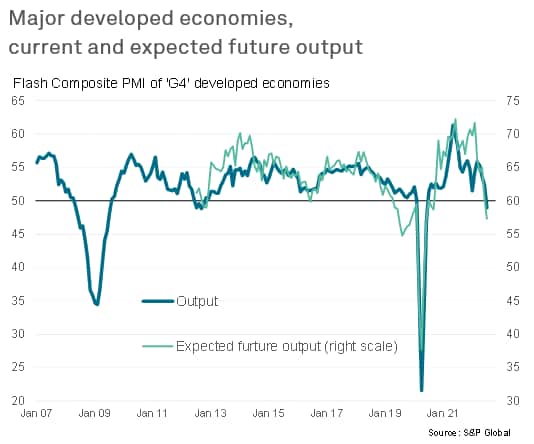 Provisional PMI survey data indicate that economic output across the four largest developed economies - the 'G4', including the US, Eurozone, Japan and the UK - fell in July for the first time since the initial pandemic downturn in the second quarter of 2020. The GDP-weighted flash PMI survey output indices for the G4 collectively registered 49.0, down from 52.4 in July, dropping below the 50.0 level to indicate a renewed fall in output. Excluding the COVID-19 lockdown months, the July reading was the lowest since October 2012.

Manufacturing across the G4 fell for the first time June 2020, having stalled in June, with new orders down for a second month running. Excluding the pandemic lockdown months, July's fall in new orders for goods was the steepest seen over the past decade.

Service sector output also fell across the G4 for the first time since June 2020 as the surge in demand for services seen earlier in the year as economies reopened from Omicron-related containment measures faltered to near-stagnation. 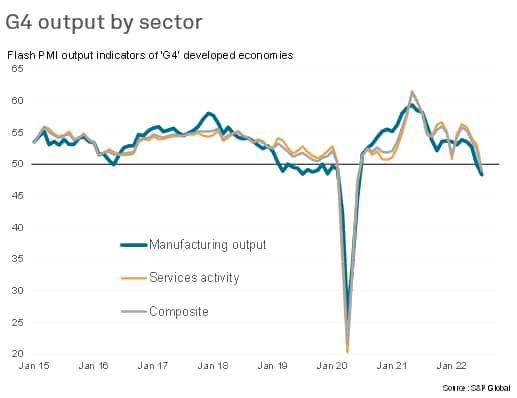 With new orders generally continuing to weaken, the near-term outlook for output is one of a steepening downturn, which is corroborated by a further fall in the surveys' future output expectations index, which sank sharply in July to a two-year low.

The US reported the worst performance of the G4 in July, the S&P Global flash PMI for the US dropping from 52.3 in June to 47.5, its lowest since May 2020. Excluding pandemic lockdown months, output is falling at a rate not seen since 2009 amid the global financial crisis, with the survey data indicative of GDP falling at an annualised rate of approximately 1%. Manufacturing stalled and the US service sector's rebound from the pandemic moved into reverse, as the tailwind of pent-up demand was countered by the rising cost of living, higher interest rates and growing gloom about the economic outlook.

A renewed downturn was also seen in the eurozone. The flash S&P Global Eurozone PMI fell from 52.0 in June to 49.4 in July, signalling contraction for the first time since February 2021. Excluding pandemic months, July's fall in output was the first since June 2013, indicative of the economy contracting at a 0.1% quarterly rate. An accelerating downturn in manufacturing was accompanied by a near-stalling of service sector growth as the rising cost of living continued to erode the tailwind of pent-up demand from the pandemic. Although only modest at present, a steep loss of new orders, falling backlogs of work and gloomier business expectations all point to the rate of decline gathering further momentum.

UK economic growth meanwhile deteriorated to slowest since the lockdowns of early-2021, the composite flash PMI dropping from 53.7 in June to 52.8 in July. Although not yet in decline, with pent-up demand for vehicles and consumer-oriented services such as travel and tourism helping to sustain growth in July, the UK PMI is now at a level consistent with just 0.2% GDP growth. Forward-looking indicators suggest worse is to come. Manufacturing conditions deteriorated for the first time in one-and-a-half years and raw material purchasing has slumped. While service providers continued to outperform in July, the latest expansion was the weakest for 17 months.

July's preliminary PMI survey results for Japan also signalled a significant loss of growth momentum. While second quarter growth had been boosted by the reopening of the economy from Omicron-related containment, July has seen this rebound fade leading to much-reduced service sector growth and a renewed fall in manufacturing output. The headline au Jibun Bank PMI fell from 53.0 in June (its highest level since last November and one of the highest readings seen since 2014) to 50.6, its lowest since March. As with the other economies, the details found in the Japanese survey's sub-indices, such as new orders and inventories, point to the trend deteriorating further in August. 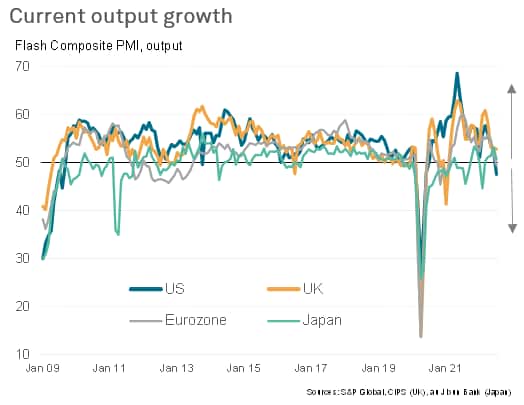 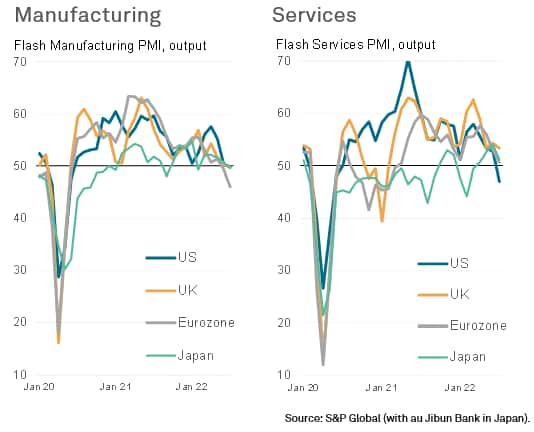 Looking across all four major economies, July saw the largest ever monthly rise in inventories of finished goods recorded since comparable data were available in 2007, often reflecting reports of weaker than expected sales and underscoring the recent deterioration of demand conditions. The new orders to inventory ratio - a useful gauge of near-term growth trends - consequently fell across the board, hinting at weaker manufacturing output growth in the coming months. 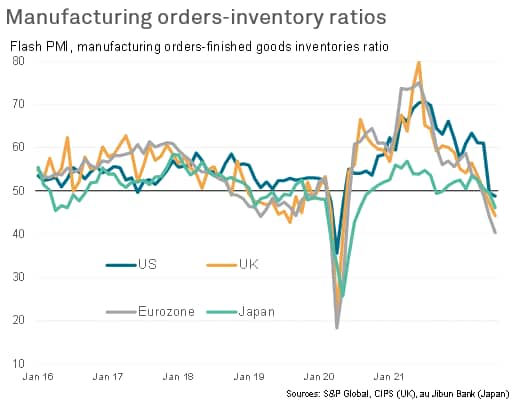 A positive from the recent weakening of demand signalled by the surveys was an alleviation of supply constraints, which in turn helped to moderate price pressures. July saw average supplier delivery times lengthen across the G4 to the smallest extent since November 2020. Average manufacturing input prices grew at the slowest rate since April 2021. 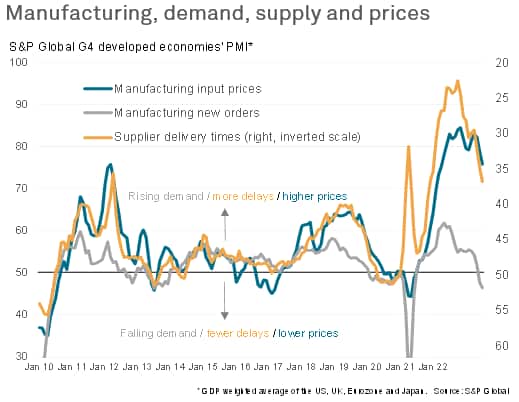 Service sector input cost inflation also cooled, down to a five-month low across the G4. These reduced cost pressures in turn helped bring down average selling prices for both goods and services in July, hinting at a broad-based easing of inflationary pressures. 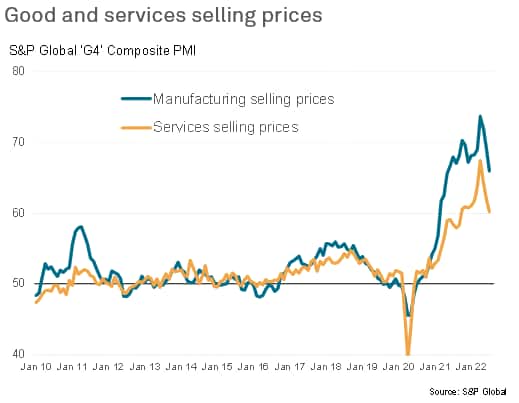 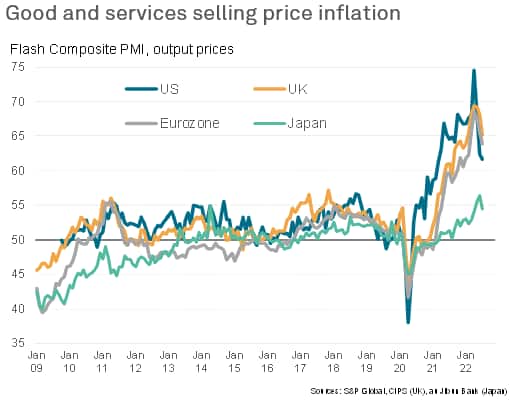 With output and demand growth as weak as signalled by the PMIs in July, central banks would traditionally be seeking to stimulate the economy. However, the July flash PMI data coincide with a further tightening of monetary policy across the developed world as central banks seek to control consumer prices inflation, which is running at the highest for four decades in the US and Europe.

In the US, the Fed has tightened policy by 180 basis points (bp) with a further 75bp hike anticipated this week. The Bank of England has meanwhile already hiked on five occasions, totalling 115 basis points, with the pace of tightening set to step up with a 50bp hike expected at its August meeting, and the ECB has raised its main policy rate by 50 points with a further hike of at least 50 bp signalled for September.

The concern is that these rate hikes, designed to dampen demand growth, will drive the pace of economic activity lower in the coming months, pushing economies into recessions.

Encouragingly, the recent easing of price pressures suggest that the major central banks may be able to ease back on the pace of tightening as the year proceeds and inflation rates cool. 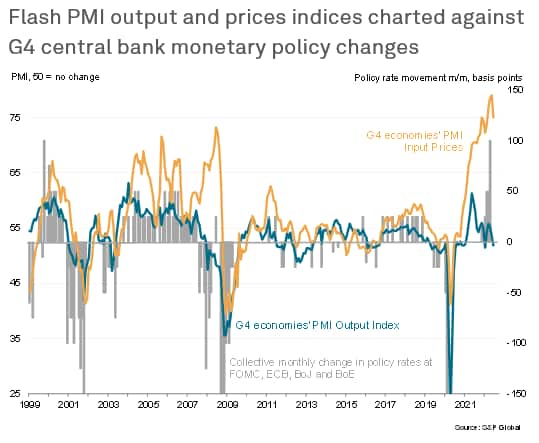