Preliminary survey data on manufacturing conditions in February showed strong manufacturing growth in the US, Australia and eurozone, plus an improving production trend in Japan, contrasting with a near-stalling of output in the UK. The latter's plight can be linked to companies reporting falling demand since the ending of the UK's Brexit transition period with the EU. 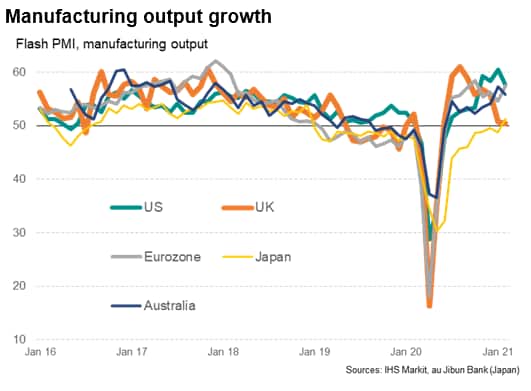 Improving production trends in most countries

Flash PMI survey data from IHS Markit showed manufacturing output growth accelerating in the eurozone to reach the second-fastest in three years, the rate of expansion coming close to the strong pace recorded in the US during the month. Although factory output growth moderated in the US during February, it remained among the highest rates seen over the past decade, thanks to a further marked increase in new orders and exports. Many parts of the US were also adversely affected by extreme weather during the month, making the February reading particularly impressive.

Production growth also cooled slightly in Australia but, like the US, had been especially strong in January. February's expansion was consequently the second-best seen over the past three years, pointing to a sustained robust recovery.

Meanwhile in Japan, which has lagged the global rebound from initial COVID-19 lockdowns over the past year, manufacturing production returned to growth in February for the first time in over two years, led by rising exports.

The UK has bucked this wider trend of improving manufacturing performance so far this year, however, with output growth coming close to stalling in both January and February. Some of this slowdown in the UK was reported to have been attributable to a payback from pre-Brexit stockpiling ahead of the UK's departure from the EU (the transition period ended on 31st December, but it's worth noting the UK also underperformed compared to the eurozone and the US during the fourth quarter of last year in this Brexit lead-up period).

A closer analysis of the reasons provided by UK manufacturers for lost orders, exports and falling output underscores the role that Brexit appears to be playing in the UK's relative underperformance. A word cloud, shown below, for example, highlights the phrases most commonly cited by survey contributors in explaining lower exports. 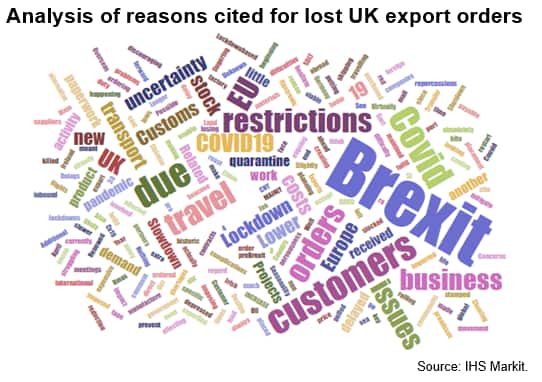 In this graphic, the larger the word, the more times it was cited. Brexit is therefore clearly cited far more frequently than COVID-19, though the latter tended to be the most commonly cited cause of lost sales by manufacturers in other countries. In fact, although 26% of UK manufacturers reporting a drop in exports linked the decline to COVID-19, more than twice as many (some 56%) linked the decline to Brexit.

While manufacturing economies in other countries appear to be gaining strength in 2021 so far, as the impact of the COVID-19 pandemic wanes and exports play an increasing role in driving growth in countries such as the US, Japan and the eurozone (especially Germany), the UK appears to be losing out due to disruptions arising from the departure from the EU.

Whether these are temporary problems relating to the recent ending of the transition period, or the first indications of a more longer lasting shift in trade patterns, remains unclear at this stage.