The US and UK reported stronger economic growth than Japan and the eurozone in April, according to flash PMI data from IHS Markit, reflecting better vaccine rollouts and easing COVID-19 lockdowns, which buoyed business confidence and boosted service sector growth in particular in the US and UK.

However, while the US saw the strongest expansion, it also reported the steepest increase in prices for goods and services. A worsening imbalance of demand and supply hints at further upward price pressures in coming months.

Flash PMI survey data showed business activity in the United States rising sharply at the start of the second quarter of 2021, building on a strong expansion in the first quarter. The IHS Markit composite PMI posted 62.2 in April, up from 59.7 in March, to reach the highest since data collection began in October 2009. As such, the data indicate that the economic recovery gathered significant momentum and outpaced the three other largest developed world economies for which flash PMI data are available. 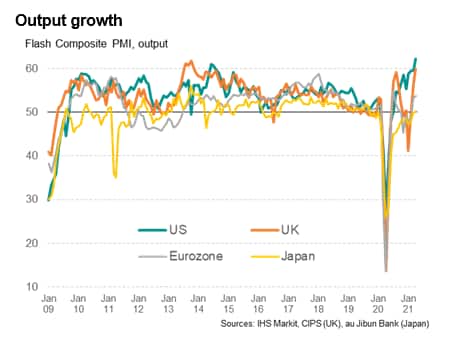 However, the other economies also saw improving economic trends. Especially impressive growth was again recorded in the United Kingdom as the composite PMI jumped from 56.4 in March to 60.0 in April. In more than 23 years of PMI history, there has been one spell of faster UK growth, recorded between August and November 2013.

Growth also accelerated in the eurozone, led again by Germany, with the composite eurozone PMI up from 53.2 in March to 53.7 in April to indicate the second-fastest expansion since September 2018.

Japan continued to lag behind the other major developed economies, but with the au Jibun Bank PMI (compiled by IHS Markit) rising to 50.2 in April from 49.9 in March, the survey signalled the first expansion since January 2020, when the COVID-19 pandemic first hit the Japanese economy.

The major source of divergence in growth rates between the four economies was the service sector. A survey record expansion was seen in the US, accompanied by the fastest UK growth for over six years. In contrast, the eurozone eked out only a marginal expansion and Japan remained in contraction, though recent months have seen both report the best performances since the pandemic began. 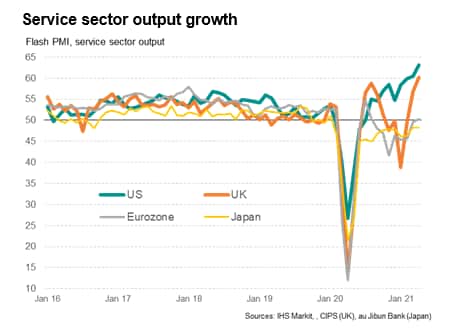 The differing service sector trends can be linked to COVID-19 infections, lockdowns and vaccine progress, as well as stimulus measures in the case of the US.

Whereas the US and UK have achieved impressive vaccine progress, with roughly half their populations inoculated to some extent, progress has been disappointing in the eurozone and Japan, the latter in particular having still only vaccinated around 1% of its population.

The vaccine progress has been accompanied in the US and UK with an easing of lockdown measures, whereas rising infection rates in the eurozone and Japan have meant new restrictions have been implemented to control the spread of the virus.

Importantly, not only have the lockdown measures affected current activity, but the vaccine progress and lockdowns have also led to differences in business confidence about the outlook, as reflected in much stronger business sentiment in the US and UK than in Japan in particular. This sentiment has boosted spending in the US and UK, and to a lesser extent the eurozone, as companies (and their customers) actively prepare for better times ahead.

In the US, optimism has also been buoyed by recent fiscal stimulus measures introduced by the Biden administration, including payments direct into households' cash accounts, the likes of which have not been replicated in other economies. 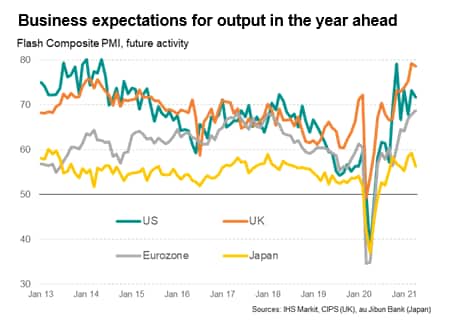 Manufacturing rises across the board

All four economies meanwhile continued to report strong manufacturing performances, and nowhere more so than the eurozone, which saw a record surge in factory production for a second successive month. The significance of this is underscored by this survey history extending back to 1997.

The UK also saw a marked expansion of production, though this in part reflected a further rebound from near-stalled production in January and February. It's also important to note that the UK's export performance for manufacturing continued to lag well behind that of the eurozone, attributed by many firms to post-Brexit trade barriers with the EU. The UK's production growth is nevertheless impressive in being among the strongest recorded by the survey. 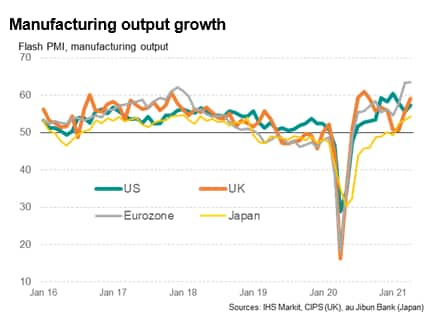 The US saw weaker manufacturing growth than seen in Europe, and weaker than seen at the start of the year, but this in part reflected supply constraints limiting production. It's possible that job retention schemes in Europe have helped factories restart production faster than their US counterparts. Encouragingly, US factories reported the largest rise in factory orders for over ten years in April, which in turn boosted hiring and helped drive improved production growth in April.

While Japan lagged behind, its producers nevertheless reported the fastest output growth for three years in April, with production buoyed in particular by rising levels of new export orders.

However, while the US is enjoying the fastest economic growth, it is also seeing by far the steepest rise in prices. Average prices charged for goods and services rose in all four economies, with rates of inflation gathering pace, but the US saw the steepest rise in the survey's history. 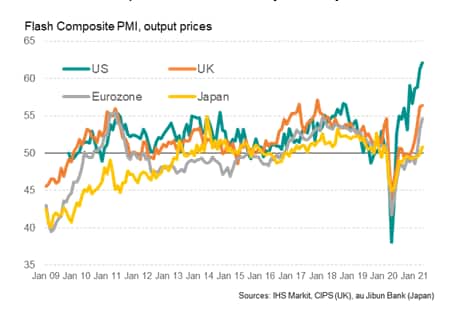 …as supply chain delays show no sign of abating

Sharply rising prices have been linked in many cases to demand exceeding supply. While demand has surged as economies opened up from the pandemic, supply has been constrained by a number of factors, most notably shipping and logistics problems (such as a shortage of available containers). Those hoping to see these supply delays starting to ease will be disappointed to see the further lengthening of supplier delivery times in the US and Europe during April, hinting at further upward price pressures. 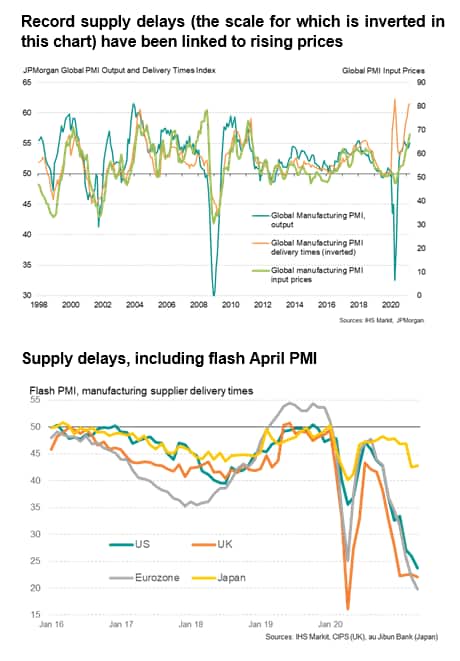