Japanese business activity growth remained firm at the end of the third quarter, led by a resilient service sector, according to flash PMI data. However, forward-looking indicators suggest that growth momentum may falter in coming months, as reflected by weak sales growth, a stagnating job market, falling backlogs and the lowest level of confidence for over six years during September. Latest PMI data therefore raised doubts whether the private sector economy can withstand the planned increase in the sales tax next month, at a time of growing headwinds to global trade. 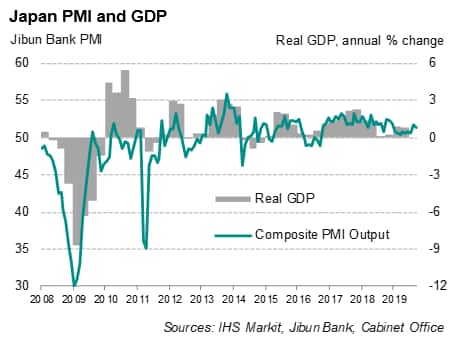 The Jibun Bank flash PMI, compiled by IHS Markit and covering both manufacturing and service sectors, fell from 51.9 in August to 51.5 in September, indicating only a modest expansion in Japanese private sector output.

At this level, the PMI indicates that the pace of annual GDP growth is around 1% at the end of the third quarter.

With the service sector having played a crucial role in driving economic activity, particularly so far this year, amid the manufacturing downturn, the September flash results raise concerns that the resiliency of services activity is showing signs of cracking. The rate of new business growth in September remained below the average seen in the first half of the year. Services employment declined for the first time for nearly three years and business optimism fell to the lowest since July 2016. 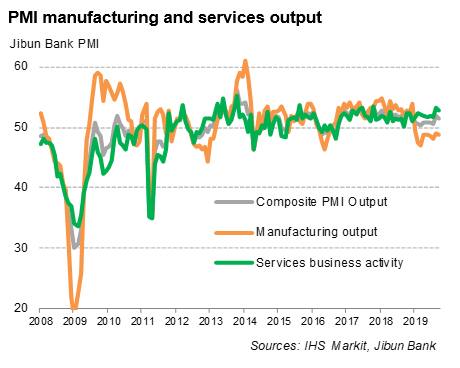 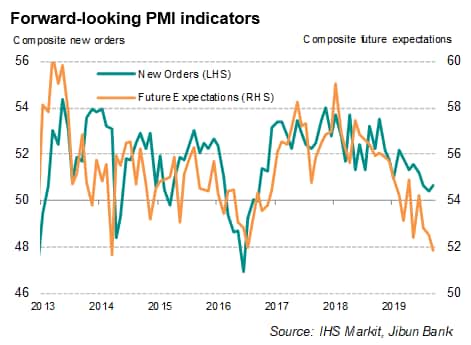 A concern is that the upcoming sales tax hike will likely deal a larger blow to services activity compared to manufacturing production because of the nature of the sector, as had been the case in 2014.

Furthermore, when the value-added tax (VAT) was raised from 6% to 8% in April 2014, the manufacturing sector had been expanding for just over a year prior to the hike. In contrast, manufacturing output has fallen in each month so far this year as trade war impact and falling global business investments hurt Japanese exports.

The manufacturing downturn looks set to extend into the fourth quarter amid scant signs of a swift resolution to the US-China trade war and Japan's tensions with South Korea. Evidence of front-loading purchases of manufactured goods ahead of higher sales tax next month suggest that demand could fall off even more in coming months.

As the consumption tax hike looms, companies' expectations of their business activity in a year's time has also deteriorated, dropping in September to the lowest for five-and-a-half years (and only slightly higher than the month prior to the 2014 VAT hike). Furthermore, employment failed to increase for the first time since late 2016, linked in turn to new business growth remaining relatively stagnant, which contributed to a decline in backlogs of work in September. 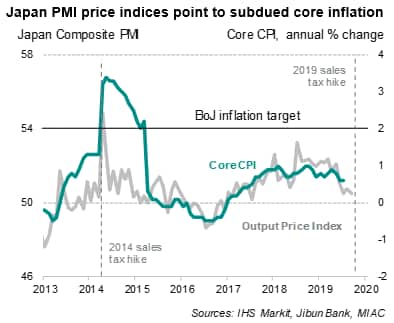 Greater stimulus from the Bank of Japan is therefore expected as the central bank looks set to come under increasing pressure to loosen monetary policy further to stimulate economic growth and push up inflation. While monetary policy was left unchanged last week, the BoJ highlighted that rising economic uncertainty calls for a review of the economy and inflation at October's policy meeting. 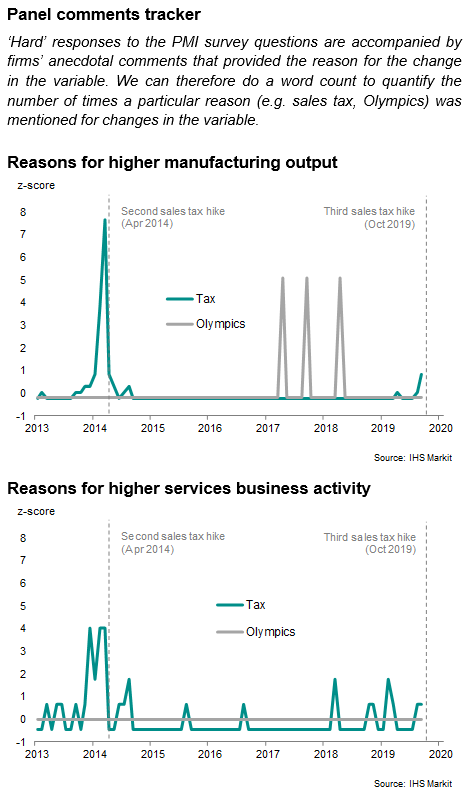