Japanese business activity contracted further in July, according to flash PMI data, adding to concerns about the depth of the economic downturn and recovery speed relative to other countries as conditions remain challenging for many manufacturing and service sector companies due to the COVID-19 pandemic. Businesses continued to be adversely impacted in particular by subdued global trade flows and restrictions on travel, while the gradual reopening of the economy provided only a modest boost to demand.

The likelihood of a robust recovery remains uncertain as Japanese firms continued to be pessimistic about the business outlook, with international trade remaining subdued while rising unemployment may hit domestic household income and spending in coming months.

The headline au Jibun Bank flash Composite PMI, compiled by IHS Markit and based on 85-90% of responses received from the monthly surveys, rose further from 40.8 to 43.9 in July, its highest since February. However, the latest figure, which measures activity levels at both manufacturing and service sector companies, remained well below 50 and signalled a further marked decline in private sector output at the start of the third quarter.

The PMI for Japan is also lagging that of other countries: the comparable global PMI for all countries excluding Japan had already risen to 48.5 by June with the PMI for the developed world up to 46.9.

Having sunk to an unprecedented low in April amid enforced emergency measures to contain the spread of the coronavirus pandemic, Japan's PMI has regained some ground but continued to indicate a downturn at the start of the third quarter. Companies reported that the weakening of demand persisted into July despite the recent easing of COVID-19 restrictions and parts of the economy reopening. The need to maintain social distancing rules and border restrictions in the absence of an effective vaccine continued to hinder a swift turnaround in the Japanese economy. 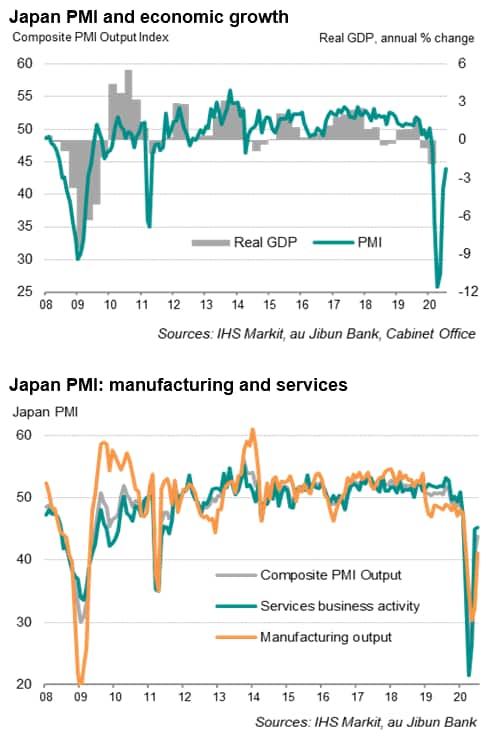 Companies also continued to report reduced inflows of new business, particularly from overseas. These firms consequently hold back on hiring and investment due to the uncertainty of the economic outlook, with concerns about a resurgence of new infections in Japan and globally. Falling profits and renewed US-China trade tensions were also worries highlighted by companies.

Manufacturing production continued to lead the decline in July. While not as severe as in recent months, the rate of contraction was substantial overall once again. The reduction of output was linked to weakening demand for Japanese manufactured goods both at home and abroad, as reflected by a further severe drop in new orders.

In services, the resumption of business operations was insufficient to lift overall output as services activity declined for a sixth straight month in July. This was accompanied by a further fall in new sales, led by export orders dropping substantially again.

With the downturn extending into the third quarter, Japan's labour market continued to deteriorate. Survey data showed employment continuing to fall during July, with the rate of job shedding intensifying from June, led by a sharper drop in manufacturing jobs. Anecdotal evidence showed that the drop in employment was primarily driven by firms seeking to reduce costs not choosing to renew contracts.

The recent improvements in the PMI data add to signs that the worst of the initial impact of the COVID-19 pandemic was seen in April, but the strength of the recovery remains disappointingly weak compared to other economies. The survey data also suggest that much of the recent gains reflect pent-up demand as businesses returned to work rather than a robust improvement in underlying demand. This paucity of demand is signalled by an ongoing fall in backlogs of work and a further steep drop in new orders, especially exports. Business expectations for the year ahead consequently remain negative, deteriorating in July after having climbed to a four-month high in June.

IHS Markit therefore projects the Japanese economy to contract by 4.9% this year before expanding by a modest 1.8% in 2021, which is more cautious than the median forecast of 3.3% anticipated by the Bank of Japan. 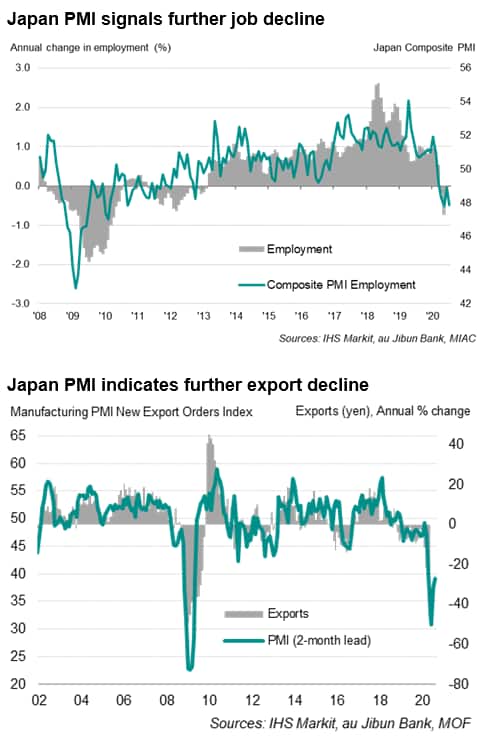