Japanese business activity grew at its fastest rate in the year to date during August, according to flash PMI data, but whether the private sector economy is on course for its best quarter so far this year remains uncertain as forward-looking indicators were mixed. Moreover, reports of clients front-loading orders ahead of the scheduled consumption tax hike in October cast doubt on the longevity of the current upturn towards the end of the year. 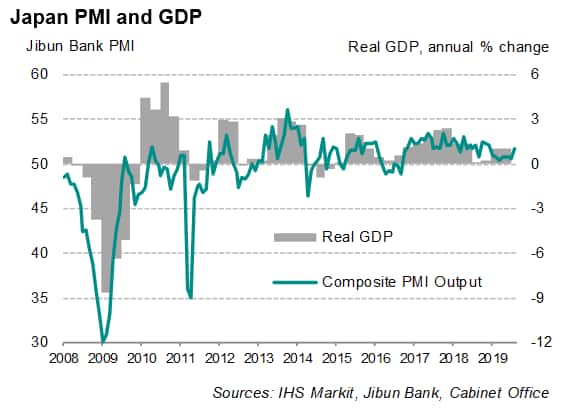 The Jibun Bank flash PMI, compiled by IHS Markit and covering both manufacturing and service sectors, rose from 50.6 in July to 51.7 in August, marking the strongest upturn in Japanese private sector output so far this year.

At this level, the PMI indicates that the pace of annual GDP growth is set to strengthen to just over 1% midway through the third quarter.

The August flash results continued to show the service sector driving the expansion, where business activity growth was the joint-strongest over the past four years (on par with October 2017). This stood in stark contrast to the ongoing deterioration in manufacturing, where output has now fallen in each month so far this year. In fact, the current outperformance of service sector firms compared to manufacturers is the most marked since 2012. 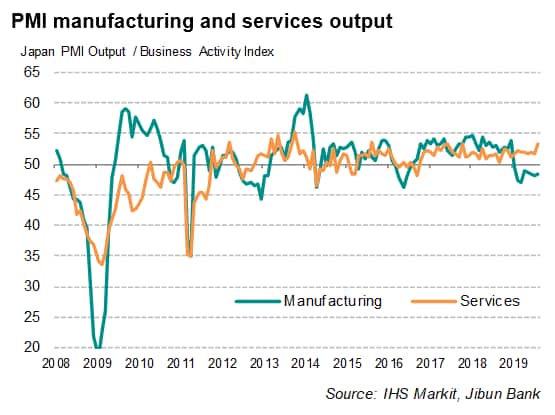 The manufacturing malaise looks set to continue amid increasing headwinds to global trade conditions. Overall new orders fell further in August and, along with weakening business sentiment, hints at further downward pressure on factory production in the months ahead. Underlying data indicated that demand both at home and abroad remained fragile, with exports declining at a solid pace. Business confidence meanwhile fell to one of the lowest levels seen on record as companies anticipate output to rise only fractionally over the next year.

While the resilient service sector may still cushion against the manufacturing downturn, how long this trend can persist is becoming increasingly uncertain as the impending consumption tax hike draws nearer.

In a further sign that the improved rate of overall output growth is likely to be unsustainable, companies' expectations of their output in a year's time fell in August, running at the lowest level for over six-and-a-half years. 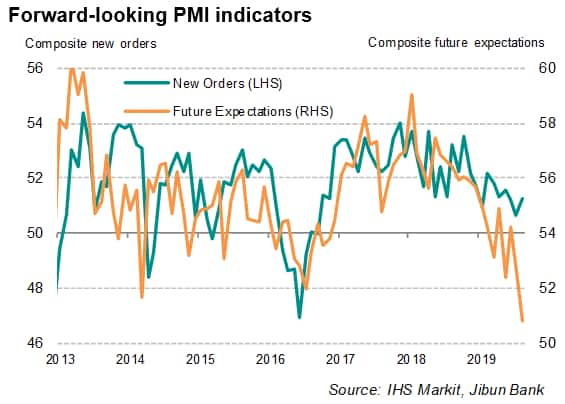