Japan's private sector economy is poised for its first quarterly decline in more than three years, after December flash PMI data indicated a third straight month of contraction in business activity. Furthermore, output prices fell for the first time since late-2016, raising the risk of deflation. While other survey indicators showed encouraging signs of growth possibly picking up into the new year, any recovery is likely to be limited, particularly if global trade uncertainties and geopolitical tensions fail to ease. 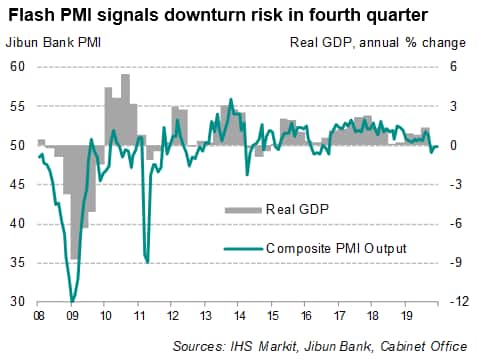 The Jibun Bank flash PMI, compiled by IHS Markit and covering both manufacturing and service sectors, came in at 49.8 in December, unchanged on November and signalling a marginal contraction in business activity for a third month running. At 49.6, the average PMI reading for the fourth quarter indicates that the Japanese economy fell into its first quarterly decline since the three months ending September in 2016.

The ongoing weakness was led by a twelfth successive monthly fall in manufacturing output, which represents the longest continual decline in goods production recorded by the survey over the past decade. The production downturn continued to be fuelled to a large extent by deteriorating external demand, in turn often blamed by companies participating in the surveys on the damaging impact of trade wars and weakened global business confidence, which has led to risk aversion and subdued demand. However, a notable slowdown in the pace of the export decline in December suggests that the deterioration in the external environment may have reached a bottom.

Service sector business activity increased further, primarily reflecting a further recovery in consumer spending from the immediate adverse impact of both the sales tax hike and typhoon disruptions in October, but the pace of recovery remained very subdued. Despite new business growth accelerating to a six-month high, service providers reported a decline in the level of backlogs of work, pointing in turn to the development of spare capacity. 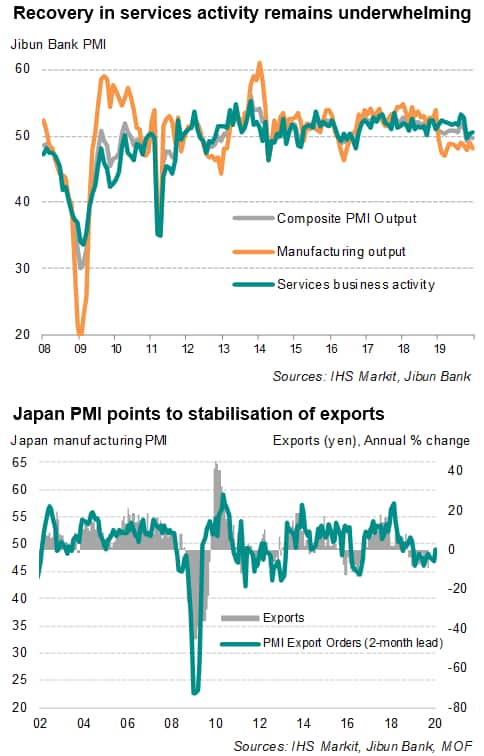 While demand conditions have turned for the better in December, with overall new business intakes returning to growth and increasing at the fastest pace for six months, the absence of an accumulation in backlogs from higher sales suggests that any pick-up in business activity in the coming months will hinge on stronger (and sustained) growth of new orders. In addition, business expectations for output in the year ahead continued to run at some of the lowest levels seen since data were first available in 2012 during December, implying that the extent of any recovery is expected to be limited.

Not surprisingly, given the recent spate of weak survey data, early December saw the government announcing the first large fiscal stimulus package since 2016, amounting to nearly 2% of Japan's GDP.

Core inflationary pressures have remained subdued as the sales tax hike appears to have only generated a one-off increase in inflation metrics rather than triggering real inflation amid the growth slowdown. In fact, average prices charged for goods and services fell for the first time in three years during December, according to the flash PMI data, increasing the risk of deflation, and once again frustrating the years-long efforts of monetary policymakers to raise price pressures.

The Bank of Japan is therefore is expected to maintain an ultra-accommodative monetary stance. However, the central bank will be constrained by limited policy tools if further downside risks arise, suggesting that fiscal policy will need to play a larger role in stimulating demand. 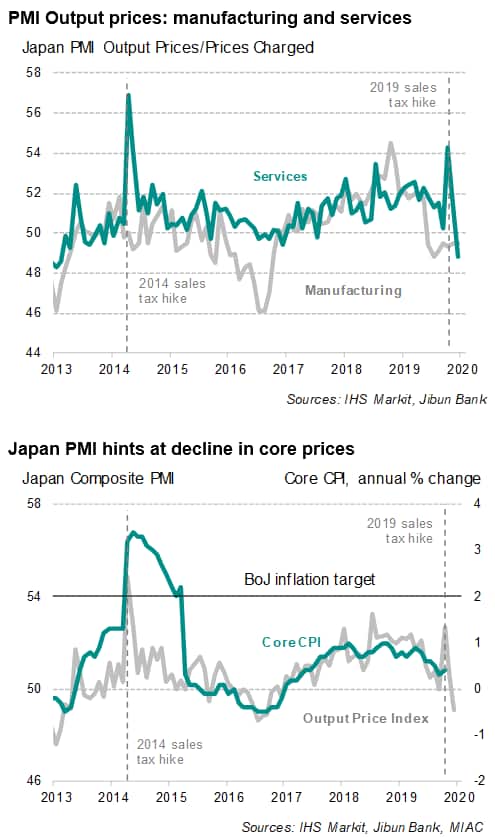