November flash PMI data point to growing risk of the Japanese economy falling into a decline during the fourth quarter, with both business activity and new orders stagnating. However, a bright spot came from improving business expectations, raising hopes that a recovery could be around the corner. 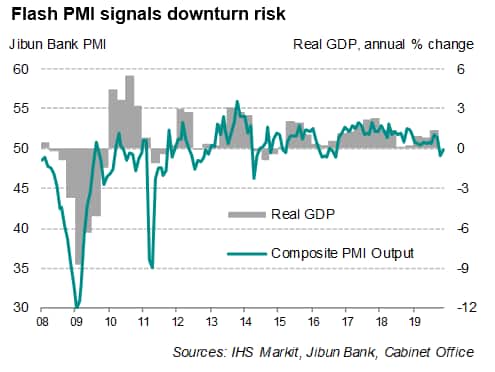 The Jibun Bank flash PMI, compiled by IHS Markit and covering both manufacturing and service sectors, rose from 49.1 in October to 49.9 in November, signalling broadly unchanged business conditions. However, at 49.5, the average PMI reading so far for the fourth quarter shows that the Japanese economy is set for its first quarterly decline in more than three years.

The economic weakness in November once again stemmed from a further deterioration of manufacturing operating conditions, where production volumes fell for an eleventh straight month. This marked the longest period of factory downturn since the depths of the global financial crisis in 2008-09. Falling production was commonly linked to another steep decline in new orders amid ongoing trade tensions.

The return of services activity growth in November was meanwhile relatively weak, and among the lowest seen over the past year-and-a-half, failing to offset the manufacturing malaise. 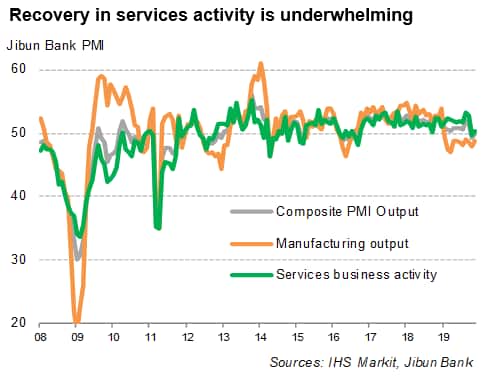 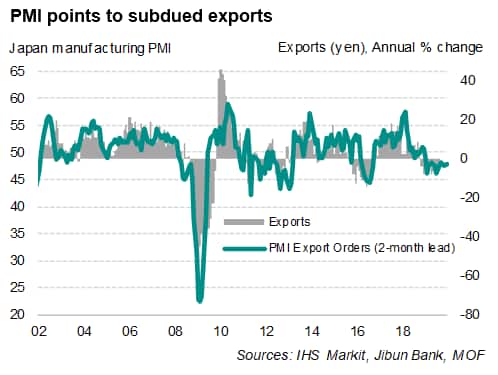 The lack of overall new business inflows meant that backlogs of work fell again in November, deteriorating at the fastest pace for just over three years and indicating the further development of spare capacity in both monitored sectors. This hints at business activity remaining under pressure over the next few months, unless demand revives.

While the near-term outlook appears gloomy, medium-term prospects seem brighter. Survey data showed further jobs growth in November, albeit at a marginal rate, while business expectations for the year ahead rose to the highest seen so far this year. Improved business confidence was supported by optimism ahead of the 2020 Tokyo Olympics Games as well as cautious confidence over the US-China trade deal.

However, hopes of a strong recovery need to be tempered as the Japanese economy continues to face structural challenges and geopolitical frictions. Any recovery in real GDP growth is expected to be weak, according to IHS Markit estimates. The latest Japan Business Outlook survey, compiled by IHS Markit, highlighted widespread concerns among businesses, including political tensions with South Korea, weak global trade conditions, an ageing population, competitive pressures and a stronger yen, which were all seen as factors that could dampen future business activity. The tri-annual survey also indicated that investment intentions were the weakest since early 2017, reflecting a broad-based deterioration in sentiment towards the investment climate.

Following a solid increase in October due to the sales tax hike, average prices charged for goods and services rose only marginally during November. The easing of selling price inflation also reflected a lack of pricing power amid weak demand, which was made even more prominent by input cost inflation running at the fastest rate for six months. The accelerated increase in input costs was primarily a reflection of a sharper rise in service sector costs, where input prices rose to the greatest extent for nearly two years. By contrast, manufacturing input costs rose at the weakest pace for three years. 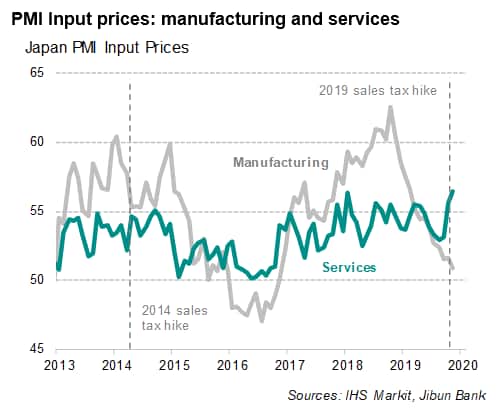 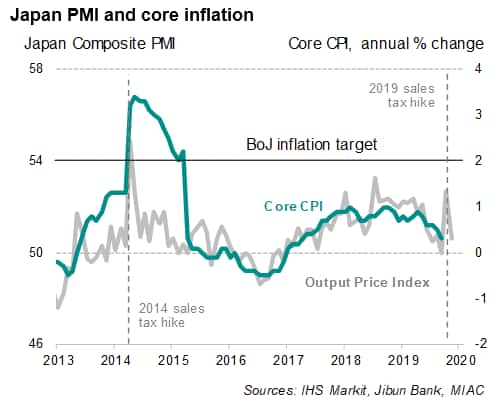 The latest headline PMI signals subdued economic activity in Japan, but other survey sub-indicators (notably future expectations) raise prospects of a modest recovery, which could stave off expectations of additional monetary easing for the moment. Questions also remain as to the potential for greater central bank support, given the already ultra-accommodative monetary conditions and concerns over the impact on the banking sector. The narrowing room for more monetary stimulus suggests that fiscal policy would play a larger role in reviving growth momentum.