The flash PMI surveys showed the extent of economic damage caused by the global outbreak of the COVID-19 virus on Japan's private sector economy. The contraction of business activity was the steepest since the 2011 Tōhoku earthquakes, with the headline Jibun Bank flash PMI plunging some 11 points to a near nine-year low of 35.8.

While the latest data signal a deepening decline in Japan's economy for the first quarter, forward-looking indicators suggest that the worst has yet to arrive, with the downturn likely to gain momentum in the second quarter, particularly if increasingly draconian measures to contain the global virus pandemic are implemented in coming months. 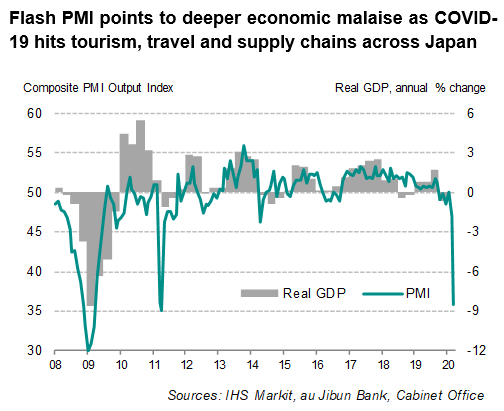 Few sectors in the Japanese economy escaped the adverse impact of the coronavirus, with the service sector hit especially hard by the collapse in demand for tourism, travel and transport. Services business activity fell at a rate not previously recorded since data on the sector were first collected in 2007, as measures to contain the spread of the coronavirus led to slumping demand. Downturns in activity were especially widely reported in consumer services, and in particular for hotels and restaurants, travel, financial services and business services.

The virus-related disruption to supply chains added an additional blow to a manufacturing sector already weakened by trade war tensions, typhoons and the sales tax hike. Factory output fell for the fifteenth straight month in March, with the latest decline the steepest since the 2011 earthquakes. More concerning was the damage dealt to demand conditions and business confidence. Total new orders (which include export sales) shrank at the fastest rate since the heights of the global financial crisis, accompanied by business sentiment among manufacturers falling to the lowest since data were first available. 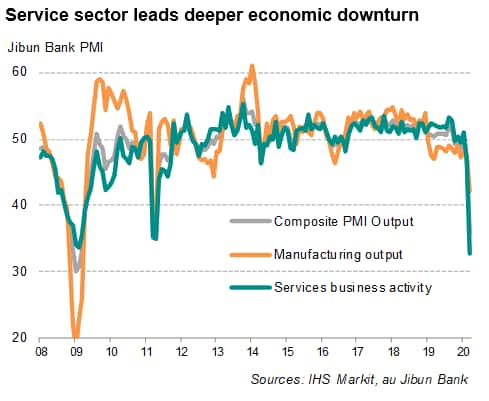 Input costs faced by Japanese businesses were meanwhile broadly unchanged in March, weighed down by the collapse in commodity prices, especially oil. This was accompanied by the steepest fall in prices charged for Japanese goods and services since the middle of 2011. The service sector reported a notably deeper decline in fees than manufacturing charges, with firms reportedly providing large discounts to boost sales amid the coronavirus outbreak.

With uncertainty over the duration of the COVID-19 situation, as well as fear of contagion, the outlook for Japan's private sector economy is looking increasingly gloomy. Business expectations for the year ahead fell sharply to the lowest seen since data for this variable were first available in 2012. Business confidence in the service sector, for which data are available further back to 2007, sank to the lowest since the depths of the global financial crisis. Manufacturing sentiment collapsed to a record low (where data for this series were available starting July 2012).

The government is considering an emergency economic stimulus package of JPY 30 trillion, with measures aimed at supporting consumption, helping companies stay in business and saving jobs. The Bank of Japan had earlier ramped up its accommodative measures, including doubling the amount of ETF purchases. 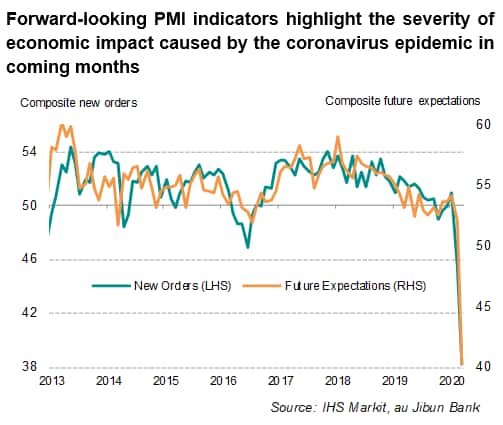 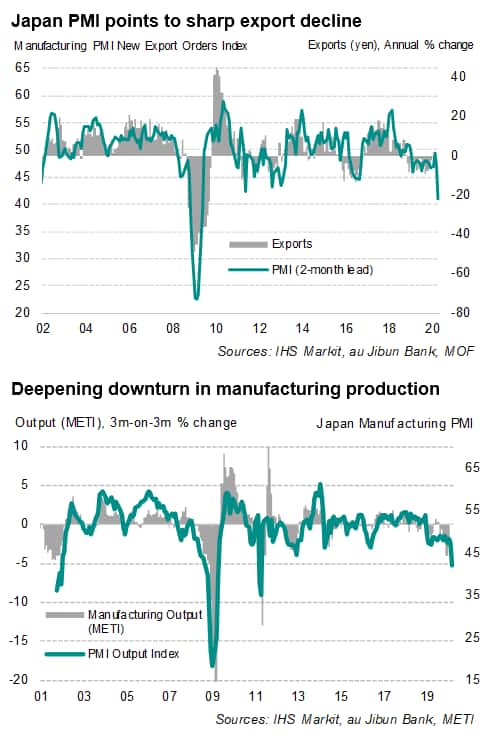