The Japanese economy is at risk of contracting as business activity was hit in October following the sales tax increase which took effect during the month. However, the extent to which the tax change has dampened economic activity was difficult to assess because of accompanying typhoon-related disruptions, particularly in the service sector.

The latest survey data also showed that new business volumes failed to grow for the first time in three years in October, while prospects for the year ahead slipped to their gloomiest since March 2014 (the month prior to the previous sales tax hike). Perhaps unsurprisingly, price pressures intensified, with output charges increasing at the fastest pace since the government last raised the consumption tax in 2014. 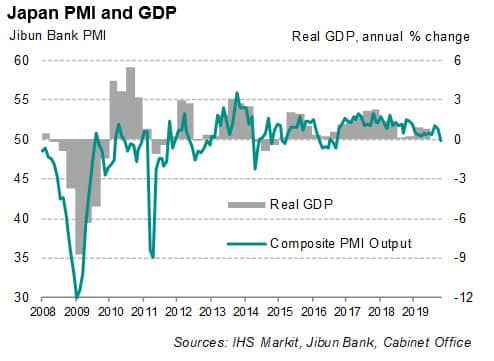 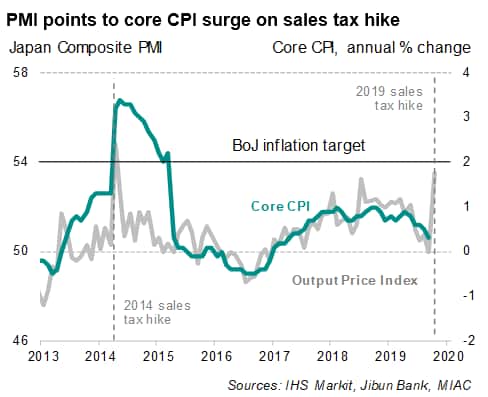 The Jibun Bank flash PMI, compiled by IHS Markit and covering both manufacturing and service sectors, fell from 51.5 in September to 49.8 in October, indicating the first contraction in Japanese private sector output for just over three years. At this level, the PMI indicates that the pace of annual GDP growth is flat at the start of the fourth quarter.

The impact of the sales tax increase, which took effect at the start of the month, was evident in October, and most notably in the service sector. Service business activity barely increased, with survey data indicating the second-smallest rise for the past three years. Despite further new business growth, the level of unfinished work fell for the first time in seven months. Job creation was the lowest for nearly two years. Service fees meanwhile surged, rising at the fastest rate since the last sales tax hike five-and-a-half years ago.

However, some caution is warranted as the extent of the tax impact on growth has been complicated by typhoon-related disruptions in October. Furthermore, significant damages caused by Typhoon Hagibis will also lead to higher government spending on rehabilitation works, which in turn could boost services activity. 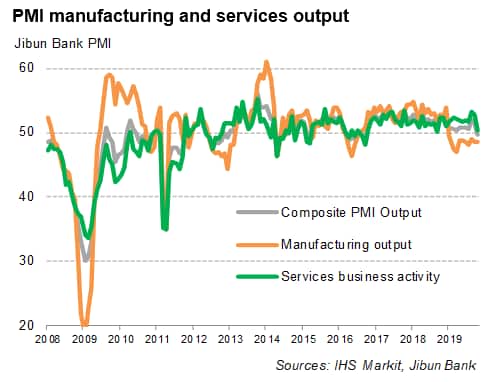 Anecdotal evidence showed that the easing of the front-loading demand seen prior to the tax increase as well as trade war tensions had dampened demand in October.

In a sign of increasing business gloom, manufacturers cut back further on purchasing activity and inventories. Stocks of finished products fell at a survey-record rate as production volumes declined for a tenth month running. Business sentiment was downbeat, with the Future Output Index, a gauge of expectations, sinking to the lowest level for seven years.

The factory decline gathered momentum at the start of the fourth quarter. Operating conditions in the sector deteriorated at the fastest pace for well over three years, led by the sharpest decline in new order inflows since the end of 2012.

Inflationary pressures in the manufacturing sector were also muted. Output charges fell for a fifth month in a row, in contrast to the service sector. Factory input prices rose at the weakest pace for nearly three years as lower commodity prices and the appreciation in the yen helped bring down imported inflation. 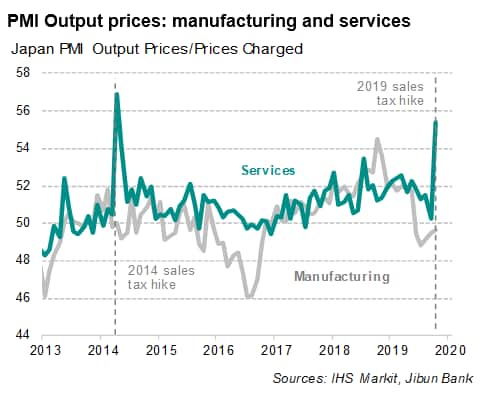 The ongoing manufacturing downturn will meanwhile weigh on business-related services, such as engineering and consultancy services. However, with services having been a critical support for growth amid manufacturing weakness since the start of the year, the speed to which the service sector recovers from the impact of the sales tax hike and the super-typhoon disruption will have a notable bearing on the likelihood of a recession.

The signal from the latest flash PMI surveys adds to growing expectations of greater monetary support from the Bank of Japan at next week's policy meeting, where deepening negative interest rates are highly anticipated amid growing overseas risks.

PMI signals in the coming months will therefore be under scrutiny to assess the health of the Japanese economy and provide guidance as to whether more policy support, not just in the form of monetary stimulus, but also from the fiscal side, is needed to avert a recession.