According to the latest 'flash' Nikkei Japan Manufacturing PMI™, business growth halted in January, ending the longest streak of expansion in the sector since the global financial crisis. Survey data indicated that goods producers in Asia's second-largest economy cut output for the first time in two-and-a-half years, while new orders also fell.

Weaker demand conditions were particularly apparent on the international front, where exports decreased at the sharpest rate since July 2016. The flash survey indicates that headwinds arising from slowing global growth are set to persist for Asian manufacturers as we head into 2019. 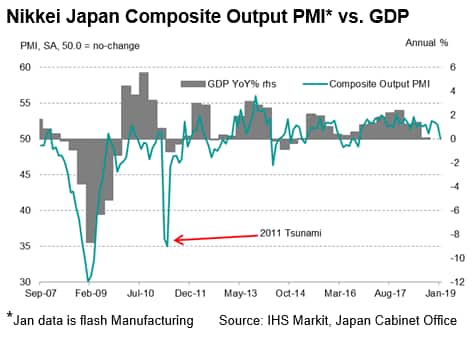 The headline Japan Nikkei Flash Manufacturing PMI, which is based on 85-90% of usual monthly responses, declined to 50.0 in January from 52.6 in December, signalling no change in business conditions. The stagnation ends the longest expansionary streak in Japan's goods-producing sector for over a decade. Furthermore, it's the lowest reading since August 2016. The fall reflected declines in key health barometers, including output and new orders falling in conjunction for the first time in two-and-a-half years.

Another worrying development in the survey came from export data, which showed international demand for Japanese goods falling at the steepest pace since July 2016. Historically, the New Export Orders PMI has picked up the various gyrations in Japan's export cycle. Latest official data for Japan indicated that exports declined 3.8% year-on-year in December, the fastest drop in two years, with flash data signalling a further reduction in January. Anecdotal evidence from the latest survey suggested that producers of semiconductor-related items in Japan had particularly suffered in January. 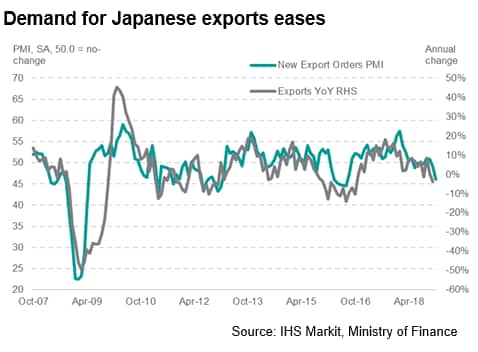 South Korea's exports, often regarded as a bellwether for the health of the global economy, have faced an increasingly less hospitable backdrop in recent months, according to our PMI Export Climate Index, matching the slowing trend seen in semiconductor trade. Given the pro-cyclical nature of the semiconductor industry, falling sales is a negative signal for the global economy. 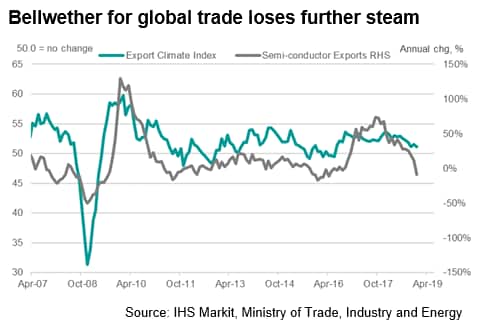 Final Manufacturing PMI data for Japan, as well as the release of data for South Korea and other global manufacturing powerhouses will be available on 1st February, which will provide further up-to-date information on economic conditions across various goods-producing sectors.