The eurozone economy picked up further momentum in June, with the headline PMI rising from the lows seen earlier in the year. However, the overall rate of expansion remained weak, with growth unbalanced between manufacturers and service providers. Moreover, both business sentiment about the outlook and price pressures continued to weaken.

A rise in the 'flash' reading of the headline IHS Markit PMI to a seven-month high of 52.1 in June puts the eurozone economy on course for growth of just over 0.2% in the second quarter, with momentum closer to 0.3% in June alone. However, this still represents only modest expansion compared to that seen through much of 2017 and 2018, and the details behind the headline numbers provide cause for some concern. 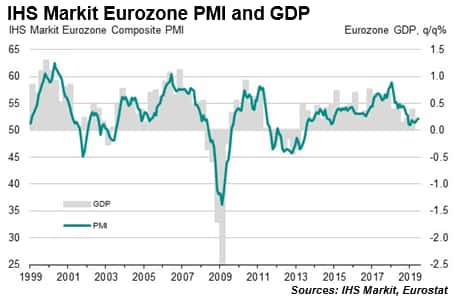 First, growth trends between the core and the periphery have widened. Although Germany and France are both showing improved performances compared to earlier in the year in recent months (the composite PMI for France was the highest since November and the equivalent index for Germany held at a seven-month high), the rest of the region is sliding closer towards stagnation, down to the weakest since November 2013. Moreover, at least some of the improved performance in France and Germany can be explained by one-off factors (such as the political unrest in France and auto sector emission disruptions in Germany) which weakened growth earlier in the year and late last year continuing to drop out of the picture, putting a question mark over whether these improved performances have legs. 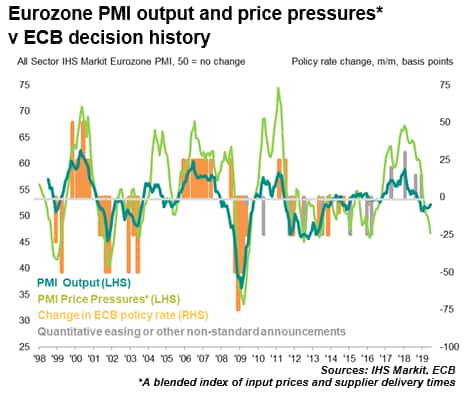 The second concern is that growth remains very much dependent on the service sector, which remains susceptible to a broadening-out of the manufacturing downturn. 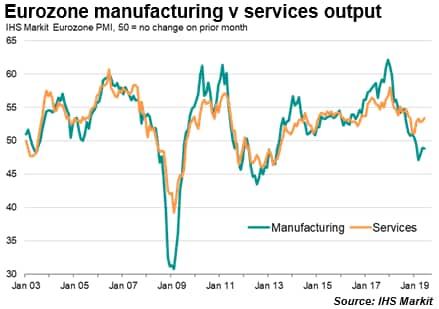 Service providers reported the sharpest rise in business activity since November of last year. In contrast, manufacturing remained in decline, rounding off a quarter in which production suffered the sharpest decline for six years. Such sustained growth of service sector output at a time of manufacturing decline is unprecedented in the survey's history, raising questions over just how long the divergence can last.

While the service sector is benefitting from the relative strength of domestic consumer demand and improving labour markets, manufacturing continues to struggle against a global headwind of falling trade flows. With employment continuing to rise in June, there is a suggestion that services will continue to enjoy robust demand in coming months, though the divergence between weak output growth and resilient employment is also unusual. 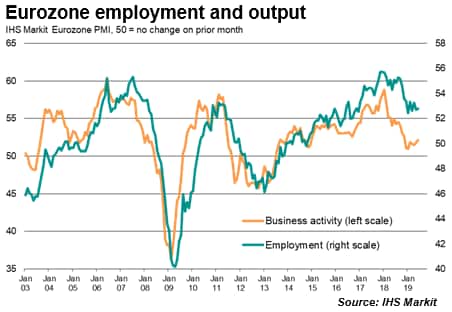 A third concern is that a further deterioration in business confidence about the year ahead suggests the pace of expansion will continue to be restrained by uncertainty and risk aversion. Expectations of future output growth hit their lowest since October 2014.

The underlying picture of weak demand was also reflected in falling price pressures. Input cost inflation across the two sectors meanwhile moderated to the lowest since September 2016, in turn alleviating upward pressure on selling prices. Average prices charged for goods and services showed the smallest increase since November 2016. Prices for goods showed a particularly modest increase, in part reflecting the first fall in manufacturing input costs recorded by the survey for three years. 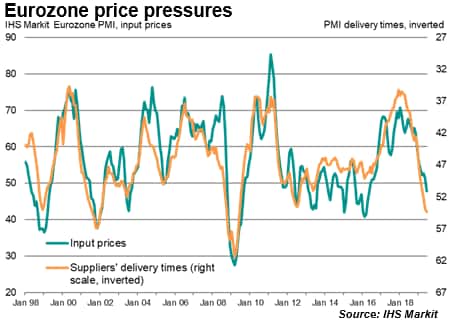 Falling raw material prices were commonly blamed on weakened global demand for commodities. Suppliers' delivery times, a key gauge of the extent to which supply and demand conditions are driving price changes, indicated the weakest pricing power since the global financial crisis.