The Eurozone economy closed out 2019 mired in its worst spell since 2013, with businesses struggling against the headwinds of near-stagnant demand and gloomy prospects for the year ahead.

The 'flash' IHS Markit Eurozone Composite PMI® remained unchanged at 50.6 for a third successive month in December, running just above the 50.0 neutral level to indicate only very modest growth of output across the manufacturing and service sectors for a fourth consecutive month.

The December reading rounds off a fourth quarter in which output rose at the weakest pace since the economy pulled out of its downturn in the second half of 2013. The PMI is indicative of GDP growing at a quarterly rate of just 0.1%. 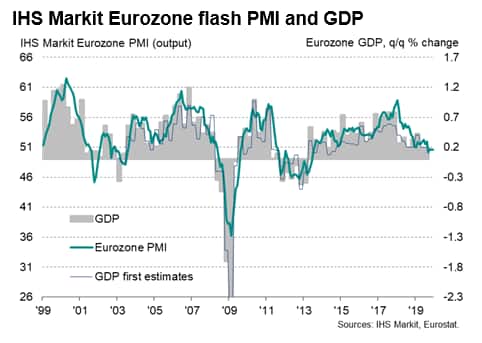 There are scant signs of any imminent improvement. New order growth remained largely stalled and job creation has almost ground to a halt, down to its lowest for over five years as companies seek to reduce overheads in the weak trading environment and uncertain outlook. Employment rose in December at the slowest rate since November 2014. 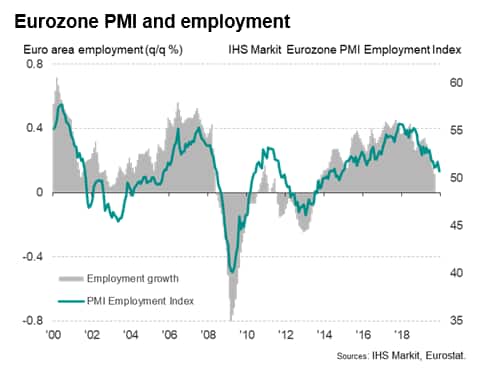 Weak jobs growth also in part reflected ongoing subdued optimism about prospects for the year ahead. Although up on the lows seen in the late-summer and autumn, expectations for future output dipped slightly in December, continuing to run at one of the lowest levels recorded since 2013.

Companies' concerns once again centred on geopolitical uncertainty, notably including Brexit-related disruption and US trade wars, alongside more general concerns about slowing global economic growth in 2020.

The December malaise was once again led by manufacturing, where output slumped at the fastest rate since October 2012, having now fallen for 11 straight months. New orders placed at factories fell for a fifteenth successive month, the rate of decline re-accelerating after having eased in the prior two months. Manufacturers cut jobs at an increased rate in the face of falling demand, culling headcounts for an eighth successive month and to the greatest extent since October 2012.

There was better news from the service sector, where business activity and inflows of new work both grew at the fastest rates since August, although in both cases the rates of expansion remained modest by historical standards, and below the averages seen in 2019. Job creation in the service sector eased further as a result, down to the second-lowest recorded over the past three years.

The concern remains that, while service sector growth remains encouragingly resilient in the face of the manufacturing downturn, any further softening of the labour market could cause weakness to spill over. 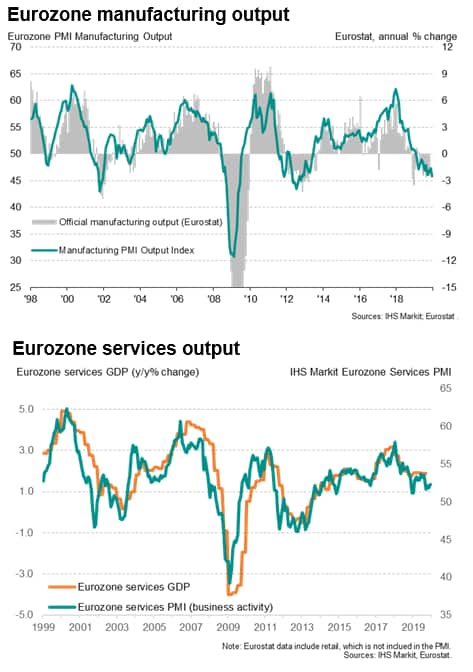 By country, France continued to provide a key support to growth in the single currency area, but Germany remained in a mild downturn, fuelled by a steepening manufacturing recession. Growth in the rest of the region continued to run at the slowest for six years.

Germany's steep manufacturing downturn has added to the chance of its economy contracting slightly in the fourth quarter, but France is enjoying a more resilient performance, providing a key area of support to help keep the eurozone growing. 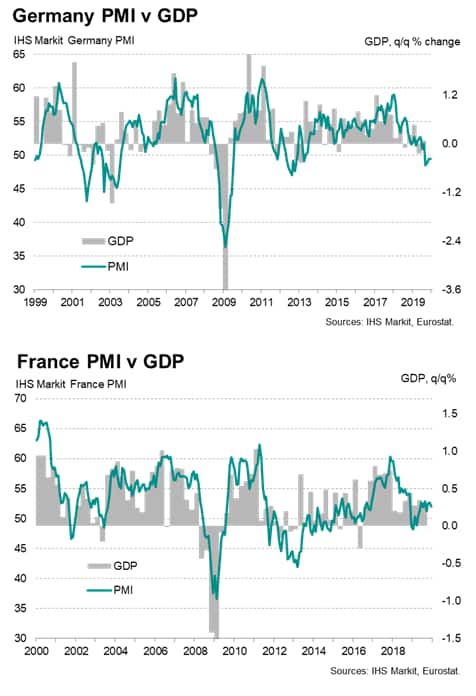 Our colleagues in the European economic forecasting team expect eurozone GDP growth to have slowed from 1.9% in 2018 to 1.2% this year, weakening further to a seven-year low of 0.9% in 2020, when a bottom will hopefully have been reached. Growth should in fact start to pick up again during 2020, barring any further setbacks, as recent stimulus feeds through - aided by further action. We expect a further 10 basis points reduction in the ECB's deposit facility rate (currently -0.50%) in the new year.

However, while we see recession risks as having eased in recent months, risks to the outlook remain skewed to the downside. Concerns include larger spill-overs from manufacturing to services and households, US tariffs, an oil price spike, uncertainty over Brexit and increased volatility in global financial markets. Furthermore, the political climate in many member states is not conducive to growth-enhancing economic reforms. While pressure is likely to build for additional fiscal stimulus, room for manoeuvre is limited by high debt burdens. Read more about the eurozone outlook here. 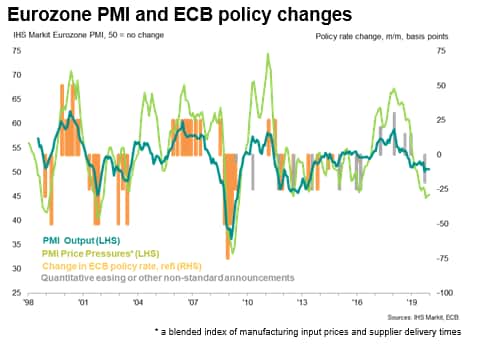