The eurozone economy plunged back into a severe decline in November amid renewed efforts to quash the rising tide of coronavirus disease 2019 (COVID-19) infections. The data add to the likelihood that the euro area will see GDP contract again in the fourth quarter.

The flash IHS Markit Eurozone Composite PMI® slumped from 50.0 in October to 45.1 in November, its lowest since May. With the exceptions of the declines seen in the first two quarters of this year, the average PMI reading of 47.6 in the fourth quarter so far is the lowest since the closing quarter of 2012 (during the region's debt crisis) and indicative of a steep decline in GDP. 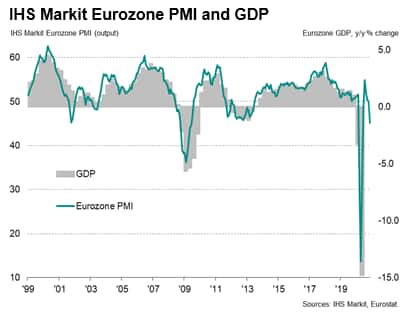 The deteriorating performance was broad-based, albeit with the service sector hardest hit from virus containment measures. While manufacturing output growth merely slowed in November to the lowest since the start of the sector's recovery back in July, attributable to a marked slowing in order book growth, service sector output fell for a third month running, with the rate of decline accelerating sharply to the fastest since May.

Inflows of new orders rose in manufacturing at the slowest rate recorded over the past five months, while new business placed at service providers collapsed to an extent not seen since May. Hospitality, travel and consumer-facing companies reported especially weak demand due to additional measures implemented by various governments across the region amid second waves of virus infections. 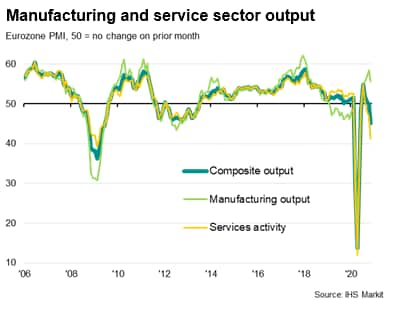 Divergent trends were also seen across the region, with Germany again bucking the wider downturn.

At 39.9, the flash composite PMI for France fell from 47.5 to indicate a third successive monthly decline in business activity and the steepest drop since May, acting as a major drag on the region as a whole. A third, and accelerating, month of services decline was accompanied by a downturn in factory output for the first time since May.

Germany, in contrast, continued to expand, albeit with the flash composite PMI dropping from 55.0 to 52.0 to register the weakest expansion since the recovery began in July. Although manufacturing output growth eased, it remained among the highest seen over the survey's history. However, service sector activity fell for a second month running, contracting at the sharpest rate since May.

Elsewhere, business activity fell for a fourth month in succession, with the pace of decline running at the fastest since May 2009 barring the recent collapse seen between March and June. A near-stalling of manufacturing output growth was exacerbated by an increasingly severe drop in services activity, pushing the flash composite PMI down from 47.2 to 42.4. 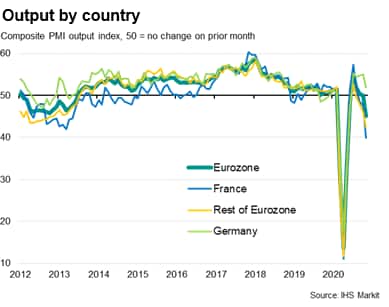 Employment meanwhile fell across the eurozone as a whole for a ninth consecutive month, with the rate of job losses holding steady on the post-pandemic low seen in October.

Job losses were seen across both manufacturing and services, though the former saw the rate of losses ease while services headcounts fell at an increased rate.

By country, employment rose in Germany for the first time since February, and France saw the lowest number of job losses since the pandemic struck. Job cuts deepened in the rest of the region as a whole, however, to the steepest since June. 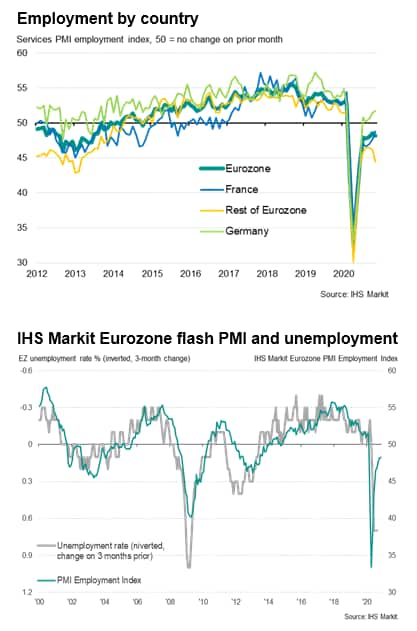 The ongoing need to cut employment was again often blamed on the development of spare capacity, as reflected in a steep downturn in backlogs of uncompleted work. In the absence of new work inflows, existing orders were depleted to an extent not seen since June, albeit with growing backlogs in manufacturing (led by a steep rise in uncompleted orders in Germany) countered by an increased rate of depletion in services.

With demand having weakened, companies increasingly sought to boost sales via discounts, causing average selling prices for services to fall at an increased rate in November, though goods prices rose modestly, registering the largest increase since May 2019 due to higher input costs. Manufacturers reported the steepest rise in average input prices since January 2019, often linked to rising demand and widespread shortages for many key raw materials. Delivery times lengthened to the greatest extent since May. 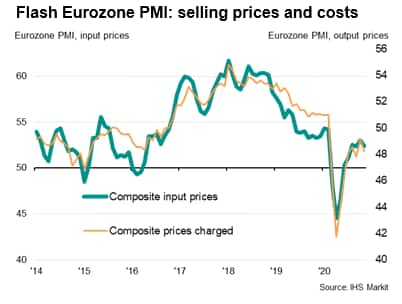 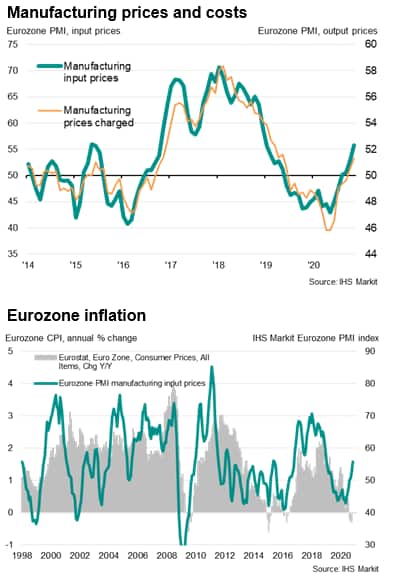 Looking ahead, business expectations about the coming 12 months recovered most of the slump seen in October to run at the second highest since February. Manufacturers were especially upbeat, with confidence rising to the strongest since March 2018, though service providers also grew more optimistic about the year ahead, commonly attributed to encouraging news of vaccine developments in recent weeks. 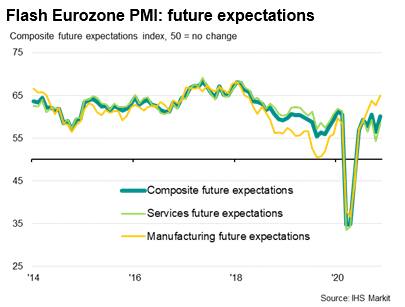 The weaker PMI reading for November came at a time of more aggressive COVID-19 containment measures. IHS Markit's Containment Index (inverted in the chart below) rose from 40 in October to 60 in November, its highest since May, reflecting renewed efforts to limit the spread of the virus in many euro member states. 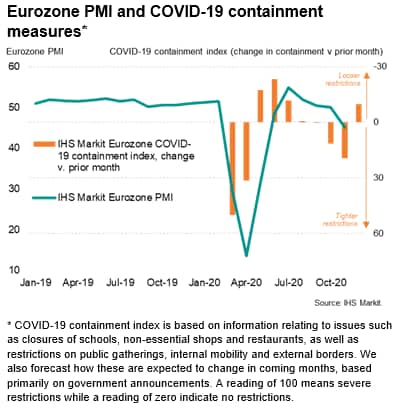 Encouragingly, these containment measures are set to ease somewhat in December, albeit with many remaining in place to some degree, curbing demand growth to some extent and limiting economic activity. The Containment Index is set to remain at 50 in December, and merely fall to an average of 41 in the first quarter of 2021, indicating a sustained notable degree of economic activity restriction extending into the New Year.

The further downturn of the economy signalled for the fourth quarter therefore represents a major set-back to the region's health and extends the recovery period, which will be further limited by ongoing virus containment measures in the first half of next year. After a 7.4% contraction of GDP in 2020, we are therefore expecting only a 3.7% expansion in 2021. 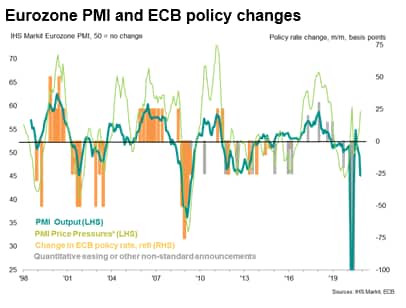