The eurozone economy was becalmed for a third successive month in November. At 50.3 in November, the 'flash' IHS Markit Eurozone Composite PMI® fell from 50.6 in October to signal the second-smallest expansion of output across manufacturing and services since the current upturn began in July 2013. The past three months have consequently seen a continual near-stagnation of output, contrasting markedly with robust growth seen over the same period one year ago.

The lacklustre PMI is indicative of GDP growing at a quarterly rate of just 0.1%, down from 0.2% in the third quarter. 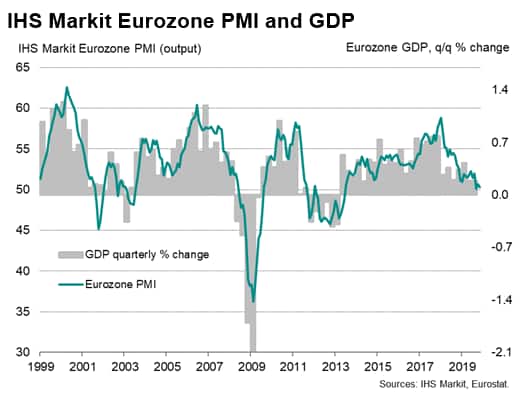 Manufacturing remained stuck in its deepest downturn for six years amid ongoing trade woes, albeit with the rate of decline of output easing modestly for a second month. November saw further signs of the factory weakness spilling over to services, notably via slower employment growth. Service sector growth waned to the lowest since January as new business inflows into service providers showed the third-smallest increase for almost five years. 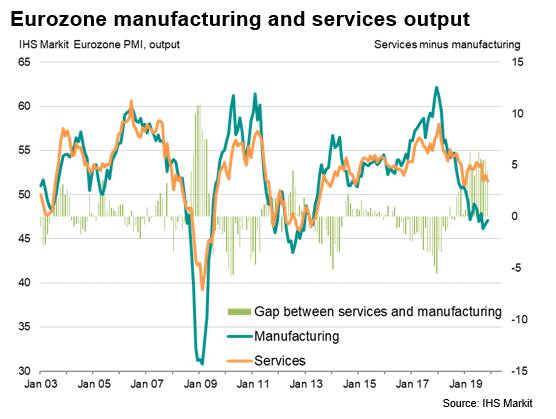 Resilient jobs growth had provided a key support to the more domestically-focused service sector earlier in the year, but with the recent PMI surveys showing employment now rising at its slowest pace since early-2015, it's not surprising to see the service sector now also straining. However, the divergence between the struggling manufacturing sector and the more resilient service sector remains striking. The extent to which this can persist is explored more fully in our recent special report, which sees signs for cautious optimism. 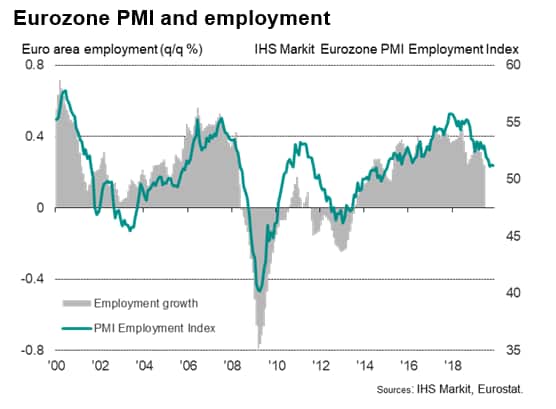 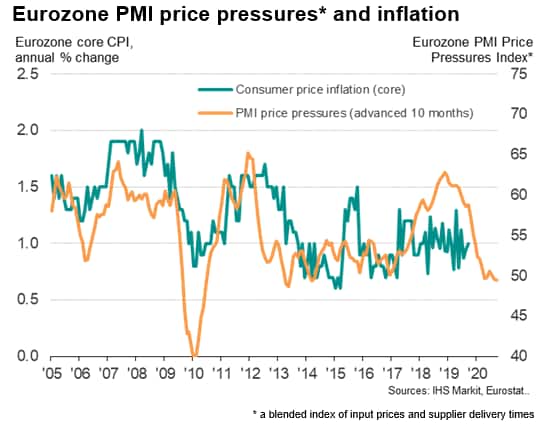 Expectations about future output meanwhile remained well below levels seen earlier in the year, reflecting heightened geopolitical uncertainty, including Brexit, trade wars and auto tariffs, plus general concerns about slowing demand. However, sentiment was nevertheless the best for four months, albeit by a small margin.

News by country was mixed. Tentative signs of life in the core eurozone countries of France and Germany contrasted with a fresh concern that the rest of the region has slipped into decline for the first time since 2013.

The PMI signalled a 0.2% rise in GDP in both the second and third quarters of this year, in line with the official data, but rounding to one decimal place masks a slowdown trend. In fact, growth weakened from 0.24% in the second quarter to 0.17% in the third quarter, according to a linear regression model. The further deterioration so far in the fourth quarter, with 0.1% GDP growth signalled by the PMI, therefore hints that the economy has continued to lose momentum (alongside moderating price pressures) despite recent stimulus from the European Central Bank.

We expect continued weak growth and underlying inflation rates to prompt a further 10 basis points reduction in the ECB's deposit facility rate (currently -0.50%) by March 2020 at the latest. 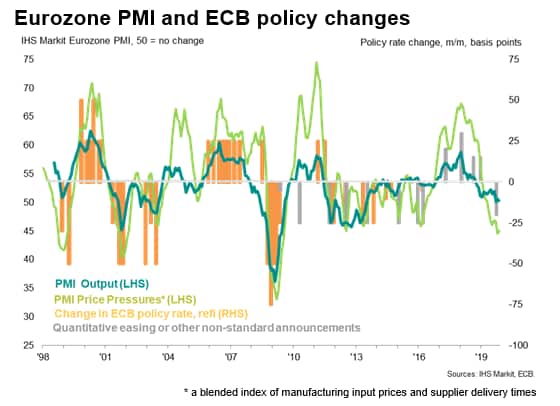 Our colleagues in the European economic forecasting team expect eurozone GDP growth to have slowed from 1.9% in 2018 to 1.1% this year, weakening further to 0.8% in 2020, when a bottom will hopefully have been reached. Risks to the outlook remain skewed to the downside. Concerns include larger spill-overs from manufacturing to services and households, the imposition of US tariffs on autos, uncertainty over Brexit and increased volatility in global financial markets.