The eurozone economy started 2020 with growth remaining subdued as manufacturing continued to act as a substantial drag and service sector growth weakened. However, signs of brighter times ahead were seen in several forward-looking indicators, notably in the beleaguered manufacturing sector, which add to our expectations that growth will pick up in coming months.

At 50.9 in January, the 'flash' IHS Markit Eurozone Composite PMI® remained unchanged on December, running only moderately above the 50.0 neutral level to signal that GDP is growing at a quarterly rate of just 0.1%, similar to the rate indicated by the surveys for the fourth quarter of 2019. The past five months have seen the weakest expansion since mid-2013. 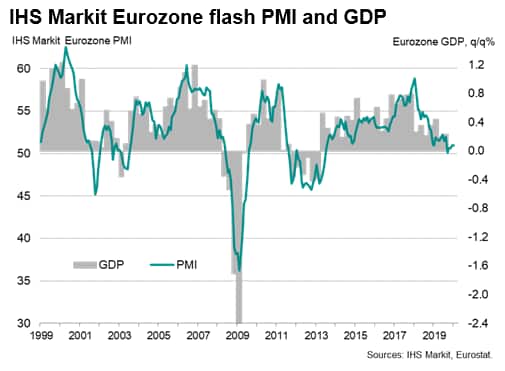 Manufacturing remained a major drag on the eurozone economy. Although the rate of decline of factory output eased slightly to the weakest since last August, the overall rate of contraction remained marked and comparable with goods production falling at a quarterly rate approaching 1%.

More encouragingly, the rate of decline of manufacturers' orders eased sharply, registering the least marked monthly drop in demand since November 2018, in part due to a substantial easing in the rate of loss of exports. With inventories also often falling as demand exceeded production, the forward-looking new orders to inventory ratio hit a 16-month high. The rise in this ratio suggests more manufacturers will likely need to raise production to meet sales in coming months. 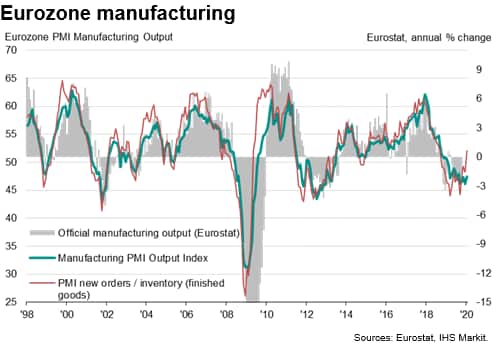 Furthermore, this improvement in the production trend was corroborated by manufacturers reducing their input buying at the slowest rate for almost a year and future output expectations jumping to their highest since August 2018.

A less welcome signal came from the service sector, where activity growth slipped to one of the lowest since 2014, commensurate with output of the sector rising at a quarterly rate of just 0.3%. The service sector also saw growth of new business inflows edge down.

The weakness of service sector growth in part reflects the historically low overall jobs growth that has been recorded by the PMI in recent months, with a softer labour market dampening consumer spending growth. However, future expectations in the service sector grew more optimistic in January, rising to the highest since last April, suggesting the mood is brightening and that firms could start to take on staff in increasing numbers in coming months. Part of the rise in optimism likely reflects the feeding-through of central bank stimulus late last year. 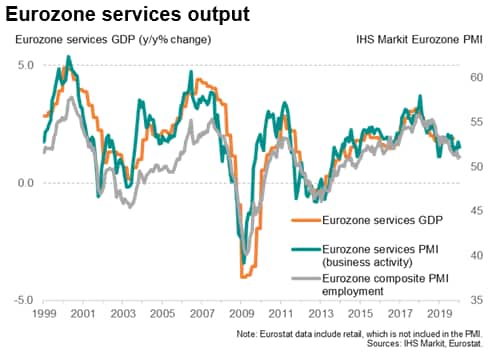 The breakdown of the flash PMI shows France and Germany reporting positive starts to the year. Germany in particular showed signs of recovery as overall output rose for the second successive month amid a first increase in new orders since June last year. A stronger expansion in services activity and a less marked decline in manufacturing production contributed to the improving picture.

The recent solid performance of the French economy continued in January as both output and new orders rose for the tenth month running. Rates of expansion softened, however, amid weaker growth in the service sector.

The rest of the euro area showed signs of weakness. Output growth slowed to a six-and-a-half year low, signalling a near-stagnation in business activity outside Germany and France. In fact, new order volumes were unchanged on December and firms raised staffing levels only fractionally. 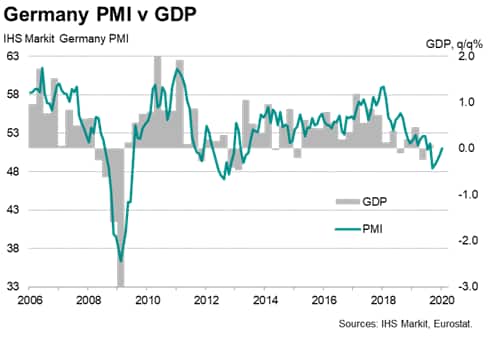 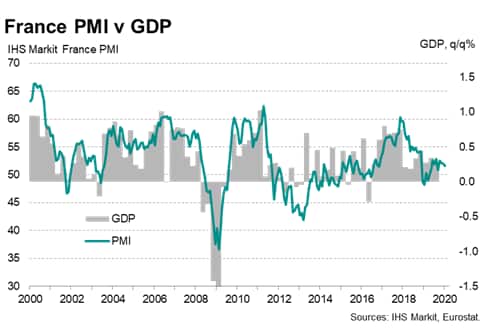 Our colleagues in the European economic forecasting team expect eurozone GDP growth to have slowed from 1.2% in 2019 to 0.9% this year, a seven-year low, but the rate of growth is in fact expected to start to pick up modestly over the course of the year, barring any further setbacks. This outlook is therefore supported by the rise in the forward-looking indicators from the January PMI - notably the marked rise in the manufacturing orders-inventory ratio, and the uptick in service sector future expectations. As such, we expect the ECB to remain on hold until it completes its strategic policy review later in the year, again absent any surprises. The progress of Brexit, US-EU trade talks and the threat of US tariffs will all need to be monitored carefully, as all present upside and downside risks to the outlook. 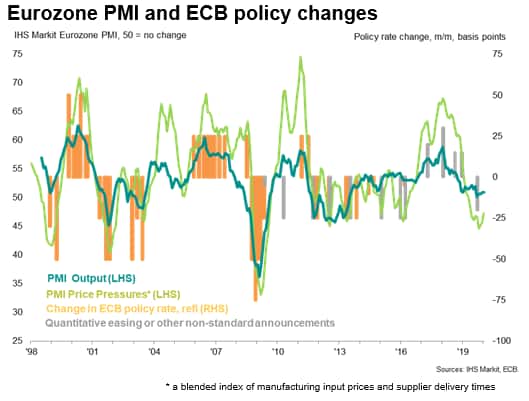