The recovery in Australian business activity lost momentum at the start of the third quarter, according to flash PMI survey data, with other survey indices suggesting that future expansion could be modest. Meanwhile, overall employment shrank in July, led by falling service sector jobs, supporting the need for greater monetary support. 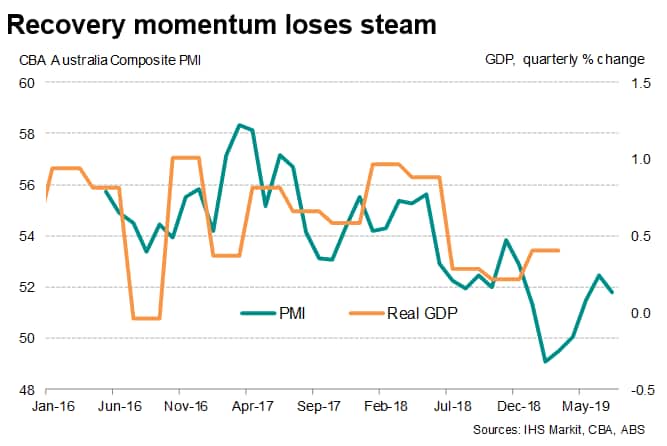 Flash estimates of the Commonwealth Bank AustraliaComposite PMI Output Index indicated a sustained recovery in combined output across both manufacturing and service sectors at the start of the third quarter. However, the slower pace of expansion seen in business activity during July reflected companies' responses to the relatively subdued demand, particularly from abroad. The headline index edged lower to 51.8 in July, down from 52.5 in June, signalling only a modest improvement of business conditions.

The July flash results showed that the manufacturing sector struggled to build growth momentum, with a slower expansion in manufacturing output leading the overall slowdown in activity. With the exception of a decline in April, production rose at the weakest rate seen in the past three years in the latest survey period. Meanwhile, business activity in the service sector also expanded at a softer pace.

Historical comparisons suggest that the latest PMI data are consistent with the economy seeing near stagnating quarterly growth at the start of the third quarter.

The meagre growth in manufacturing output was accompanied by a pullback in order book growth, led by a further drop in export sales at a time of increasing trade protectionism. The rise in new order inflows in July was slower than in June, and remained well below the historical average.

With weaker inflows of new work into both manufacturing and service sectors, the overall rise in new business intakes also moderated. Though still higher than growth rates seen earlier this year, new order book growth measured across both sectors was well below the series average. 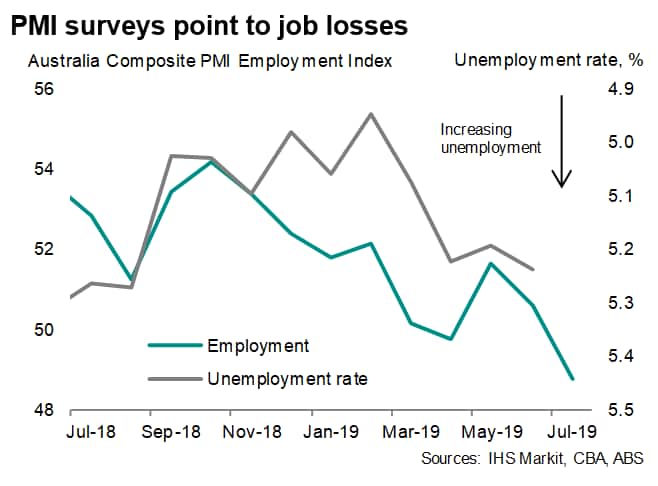 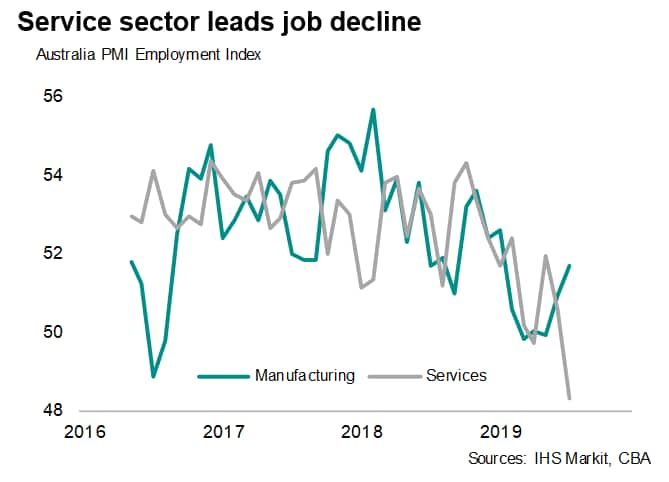 Softer demand growth for Australian goods and services meant there is increasing pressure for companies to manage operating costs by maintaining a lean workforce. The overall level of employment fell for a second time in the survey's three-year plus history and at the steepest rate on record, led by a decline in service sector jobs.

While manufacturing jobs rose further (and at an accelerated pace), the reduced growth of new business meant factories increasingly tapped into previously-placed orders to ensure production volumes remained steady. As a result, backlogs of work in the manufacturing sector fell in July and at the joint steepest for just over a year, hinting at downward pressure on factory employment in coming months.

The weakness in the job market as indicated by the latest PMI results will lend support to the Reserve Bank of Australia's view that lower interest rates are necessary to bolster employment growth.