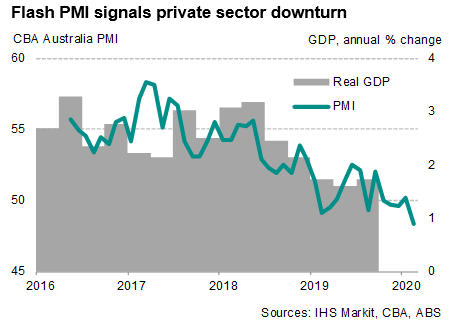 The Commonwealth Bank Australia Flash PMI, compiled by IHS Markit and covering both the manufacturing and service sectors, fell to 48.3 in February, down from 50.2 in January. As such, the flash estimate signalled the steepest contraction of business activity since data collection began in May 2016, indicating that the Australian economy is on track for a first quarter decline. 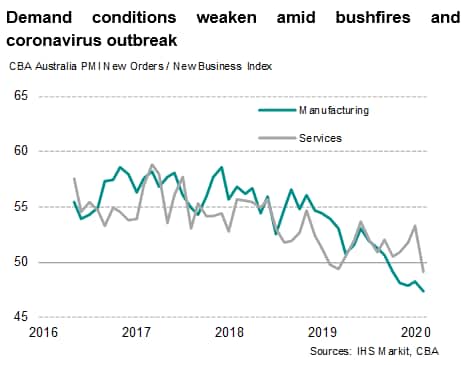 The survey data showed the downturn in business activity was broad-based, fuelled by ongoing weakness in manufacturing output and a renewed decline in services activity. Lower output was led by a softening of demand. While bushfires continued to disrupt economic activity, the outbreak of Covid-19 had reportedly also hurt sales. New business volumes of both manufacturing and service sectors declined, with goods orders and service sales falling respectively at the second-fastest and fastest rates on record.

The weak sales trend contributed to a freeing-up of operating capacity, as reflected by the first decline in backlogs of work for one-and-a-half years. The development of spare capacity in turn dampened hiring, with the survey indicating a reduction of overall private-sector employment.

The deterioration of private sector business activity was accompanied by a weakening of business expectations, suggesting companies expect economic conditions to remain challenging in the months ahead. While still positive, the Future Output Index, a measure of confidence for the year ahead, continued to run below the series average, slipping to the lowest for four months during February.

Business confidence was primarily dented by worries over subdued demand conditions and the uncertainty surrounding the economic impact of the coronavirus outbreak, according to anecdotal evidence.

The deepening malaise in Australian private sector economy puts further pressure on policymakers to act amid recent stimulus packages announced by several Asian governments, including South Korea and Singapore. With monetary policy already very accommodative and the key policy rate edging closer to zero, there will likely be increasing calls for greater fiscal measures to support growth, especially if the economic impact of the coronavirus outbreak becomes deeper, more severe and widespread. 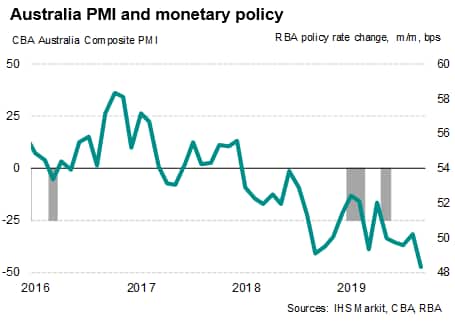