May saw another substantial fall in business activity across Australia, setting the scene for a deepening downturn in the economy during the second quarter. Even as lockdown measures were relaxed in mid-May, this only contributed to a minor easing of the rate of contraction in business activity as demand continued to weaken. This resulted in job losses persisting into May as firms worried about excess capacity.

However, a bright spot in the flash survey data came from the longer-term business outlook, as more firms expressed optimism based on expectations that the COVID-19 situation will improve in a year's time.

The Commonwealth Bank Australia Flash PMI, compiled by IHS Markit and covering both the manufacturing and service sectors, came in at 26.4 in May, up from April's record low of 21.7. Since any reading below 50.0 indicates a decline from the previous month, the latest figure highlighted that private sector output in May fell substantially further after April's slump, registering the second-steepest monthly fall in business activity in the four-year survey history.

The latest figure took the average PMI reading for the second quarter so far to 24.0, which is over 20 index points lower than the first quarter average, indicating that the economy has almost inevitably fallen into a recession.

The service sector again led the downturn in May, with a sharper reduction of output than manufacturing. The survey showed widespread declines in various service sub-sectors, including banking and finance, accommodation and food services, arts and entertainment, as well as transport, as COVID-19 restrictions remained in force for the first half of May.

While the rate of decline eased somewhat in services, the manufacturing decline intensified in May. Production volumes fell at a survey-record pace as falling demand and shortages of material inputs constrained output. 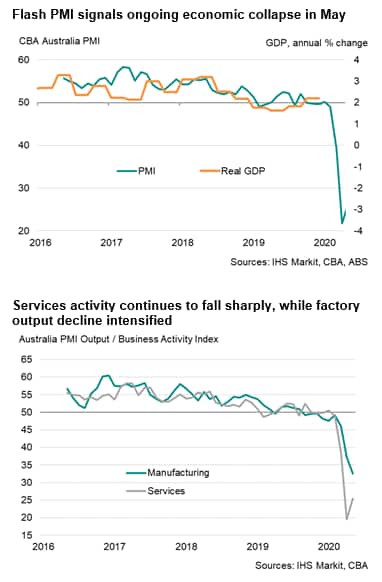 The impact of COVID-19 measures on demand conditions remained severe. New orders across both manufacturing and services fell substantially from the previous month, though the rate of contraction eased from April's record. Here again, service providers reported a steeper reduction of new business inflows, although the decline in factory orders struck a record pace.

Anecdotal evidence indicated that the temporary closure of customers' businesses, reduced construction activity and general uncertainty over the duration of the global pandemic had weighed heavily on manufacturing sales.

With restrictions on movement and business operations, alongside slumping sales, firms sought to reduce staff numbers in May. Survey data indicated that employment fell sharply again in the middle of the second quarter, and at a rate that was near April's record. This suggested that substantial further job shedding is expected in May, following nearly 600,000 job losses in April, according to official statistics. 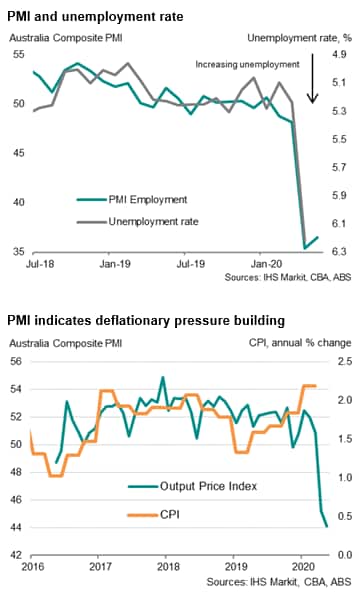 The survey data also brought further signs of deflation in May, with prices falling for a second straight month, reinforcing the central bank's view that inflation will turn negative in the June quarter.

Deflationary pressure was led by the service sector, where rates of decline in both input and output prices intensified to a survey record. Service providers generally mentioned that the JobKeeper payment scheme, government childcare subsidies, lower fuel prices and redundancies contributed to reduced expenses. This in turn was passed on partially to customers in the form of lower fees as firms attempted to stimulate demand.

The manufacturing sector meanwhile reported the first decline in output prices in the survey history, despite input costs rising solidly in the month. Wage support schemes and greater competition led goods producers to cut selling prices amid weak sales, as they bore the burden of rising costs. Supply shortages and a relatively weak exchange rate were cited as drivers of cost inflation.

Will we see a recovery?

While the near-term survey indicators signalled an economy stuck in a deep contraction, longer-term business expectations were much more optimistic. The Future Output Index, a measure of confidence, climbed by nearly 15 index points to an eight-month high. Optimism was largely driven by expectations that the COVID-19 situation will improve in coming months, accompanied by restrictions being lifted. Many parts of Australia have already started to relax restrictions since the middle of May, although some measures to maintain social distancing remain in place.

That said, the further easing of lockdown measures relies on there being no resurgence of significant number of new COVID-19 cases. Moreover, the concern is that global demand for goods and services will remain subdued for some time, in particular if travel restrictions or self-isolation requirements are kept in place. Such an outcome will dampen the recovery of Australia's private sector.

How to read survey indices

April is likely to prove to be a low point as governments around the world start to relax lockdown restrictions. As we look ahead, survey indices may move closer to 50 in coming months, but some caution is warranted when interpreting the PMI figures.

It is worth bearing in mind that a PMI reading of 50.0 indicates no change in any month from the previous month. So even if the PMI readings may look V-shaped on a chart, do not be misled. A reading of 50 merely means that none of the lost output has been recouped. To see any meaningful recoveries, the PMI needs to be commensurately higher than 50 to compensate for an equivalent drop below 50 in the prior month, suggesting that readings of 60, 70 or even 80 are necessary, given the extent of the declines seen in recent months.

Final manufacturing and services PMI data will be released on 1st and 3rd of June respectively.