Business activity surged higher in Australia during December as lockdown measures to contain the spread of COVID-19 were relaxed. Business expectations for the year ahead also improved, rising to the highest for over two years, amid news of successful COVID-19 vaccine trials. Exports continued to fall, however, and supply shortages remained widespread, acting as dampeners on the recovery.

IHS Markit's flash PMI, measuring output across both manufacturing and services, rose from 54.9 in November to 57.0 in December, its second highest since June 2017 and indicating a marked acceleration of economic growth in the closing month of 2020. 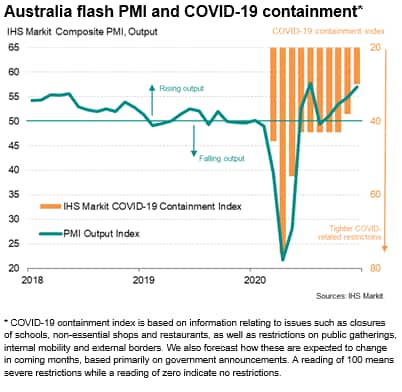 The rate of expansion signalled by the PMI has now accelerated for three successive months, underscoring how the recovery has continued to regain momentum after the initial rebound from the first lockdowns faded in August.

December's improvement in the PMI coincided with a relaxation of virus-fighting measures. IHS Markit's COVID-19 Containment Index for Australia fell from 38 to 30 between November and December, indicating that virus-related restrictions are now the loosest since the pandemic started. The index peaked at 76 at the hight of the initial lockdowns back in April, which led to the PMI falling to a survey-low of 21.7, pointing to a very steep deterioration in economic growth.

The rise in the flash PMI, which is an early estimate based on around 80% of normal monthly replies, bodes well for GDP. According to the latest available official data, the economy rebounded in the third quarter, mirroring the recovery signalled in advance by the earlier PMI numbers, expanding by 3.3%. However, that expansion followed a 7.0% decline in the second quarter, and still left the economy 4.2% smaller than its peak seen at the end of 2019. 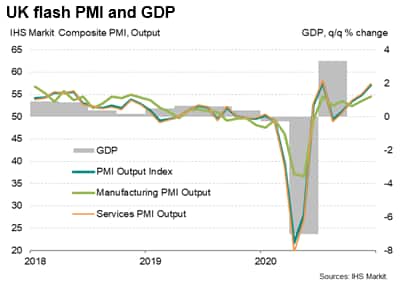 The improvement in the recent flash PMI numbers therefore suggests that the economy continued to close the gap of lost output due to the pandemic in the fourth quarter, with a broad-based upturn of both manufacturing and service sector output.

The survey's sub-indices pointed to this strong momentum persisting into the first quarter of 2021.

First, new orders growth accelerated in December to the fastest since July 2017. While manufacturers reported a welcome further upturn in order book growth, it was in the service sector where the main surge of new demand was seen, with inflows of new business jumping higher to an extent not seen for nearly three-and-a-half years as the economy continued to open up from COVID lockdown measures, especially in consumer-facing sectors.

Second, business expectations for the year ahead rose to the highest since August 2018 reflecting improved prospects amid encouraging vaccine news.

Third, with order books filling up and the outlook brightening, firms took on extra staff for a second successive month in December, pointing to a further recovery of the labour market. Not only is this an encouraging sign of businesses gaining more risk appetite and boosting their expansion plans, but rising employment should also help bolster the household sector.

It was not all good news, however, with exports of both goods and services continuing to decline during December. Services once again showed an especially steep fall, largely reflecting ongoing travel curbs associated with the pandemic, which hit tourism in particular. Encouragingly, though, the drop in services exports was the smallest recorded since the decline began back in February.

In manufacturing, the loss of export orders was relatively modest but nonetheless a disappointment, given recent signs of improving global trade flows. Companies in part attributed the decline to weakened demand from China, but also linked the drop in exports to shipping delays and container shortages, the latter having become particularly problematic in recent months as global demand has picked up.

Supplier delays in fact remained worryingly widespread during December, as indicated by a further marked lengthening of supplier delivery times. Inventories of purchased inputs also fell sharply, reflecting shortages caused by the supply delays, acting as a potential dampener on production growth in the New Year. 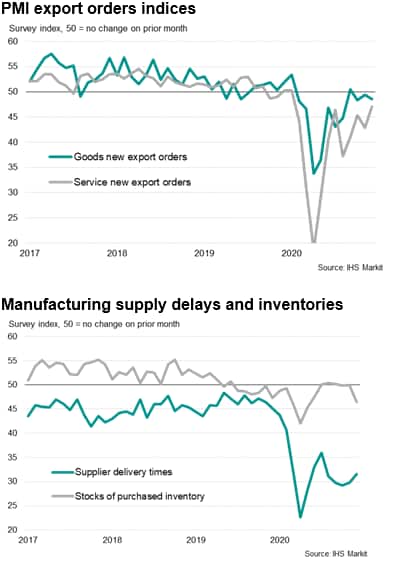 While December's flash PMI data add further to signs of Australia's economy continuing to recover from the pandemic, the survey also serves as a reminder that the path to recovery remains challenging. Activities such as travel and tourism are expected to remain under pressure for some time to come, awaiting full vaccine roll outs, curbing service sector growth, and manufacturers remain beset with challenges in terms of the supply of goods and international trade tensions.