The Australian economic recovery gained further momentum in the middle of the year, according to flash PMI survey data, led by the service sector and supported by steady manufacturing growth. The surveys also brought signs of the recovery extending into the second half of the year as demand conditions improved, particularly in the domestic market. Exports, on the other hand, acted as an increasing drag on the economy. 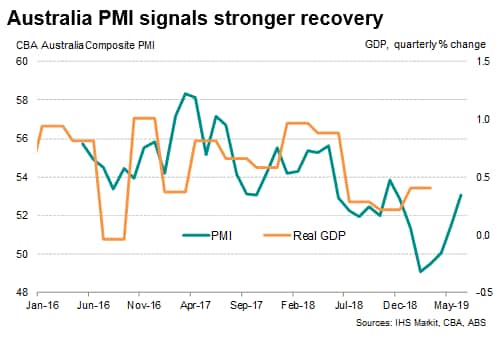 According to flash estimates, the Commonwealth Bank of Australia Composite PMI Output Index rose for a second straight month, from 51.5 in May to 53.1 in June. This is the highest reading for seven months, signalling a solid improvement of business conditions.

The business outlook for Australia's private sector brightened further in June. Growth in new orders for goods and services accelerated to a seven-month high, despite a decline in foreign sales, suggesting that the domestic market is playing an increasingly important role in driving overall demand.

According to anecdotal evidence that accompanied the survey results, the conclusion of the federal election appeared to have helped spur client demand. Weaker foreign demand was meanwhile blamed on the largest fall in exports of goods and services seen since the survey began three years ago.

Additional sales meant companies had to scale up business activity, but even the increase in output failed to prevent a further (and greater) accumulation in backlogs of work, suggesting a lack of spare capacity in the short term.

Employment was up again during the month, with jobs being created as firms sought to boost capacity to meet the improvement in demand and prospects for greater sales in coming months. Business expectations for the year ahead also rose to the highest since January. 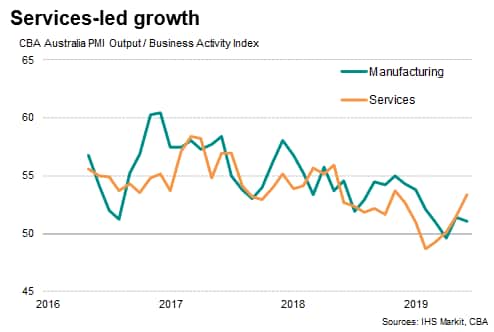 The service sector led the expansion in June, with business activity expanding at the second-fastest pace for just over a year.

Steady growth in manufacturing also helped to support the Australian economy. However, the rate of growth of manufacturing output remained among the weakest seen over the three-year history of the survey, subdued by falling export sales. A firmer overall rate of expansion in new orders (thanks to rising domestic demand) and an upturn in business confidence among manufacturers nevertheless bodes well for future production growth.

With the jobless rate rising despite resilient employment growth, the Reserve Bank of Australia recently lowered the policy rate to a record low of 1.25%, with governor Philip Lowe pledging for more rate cuts if necessary to bolster the job market. While the PMI employment index signalled growth in June, the reading remained below the historical average, building the case for further monetary easing. 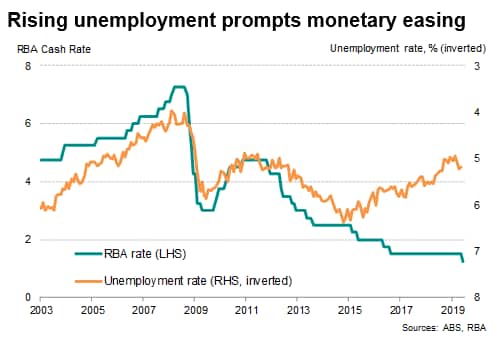 For more information about the PMI surveys and the Commonwealth Bank PMI for Australia, please contact economics@ihsmarkit.com