Business conditions among Quebec manufacturers deteriorated in May for the first time since January 2017, amid a softer increase in output and the first contraction in new business in 28 months.

At 49.8 in May, the seasonally adjusted headline Quebec PMI dipped from 50.6 in April to signal the first deterioration in manufacturing business conditions since January 2017. A key factor in the weaker performance of Quebec manufacturers was softer output growth, which expanded only marginally during May. 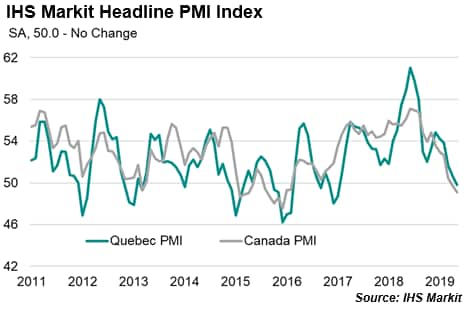 The picture with regards to the national survey was even less rosy than for Quebec, with the national PMI signalling the second monthly deterioration in national manufacturing operating conditions and the fastest contraction of output since December 2015.

Demand conditions for Quebec's manufacturers have been on an easing path since the growth highs established in mid-2018. In fact May saw levels of overall new business among manufacturing firms decline for the first time since January 2017. Export sales meanwhile contracted for the third consecutive month, dropping at the sharpest pace for just over two years. 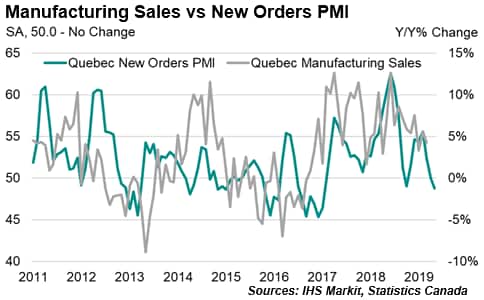 Official employment data for Quebec signal a solid expansion of manufacturing payrolls at the start of this year, rebounded from the soft patch observed in mid-2018, but the rate of job creation is now showing signs of fading.

The latest Employment PMI data points to a slower expansion of payrolls among Quebec manufacturers, comparable with official data signalling quarterly growth of around 2%. May's PMI data imply a slight easing of job creation, with the index recording the weakest expansion of staffing numbers since January 2018. 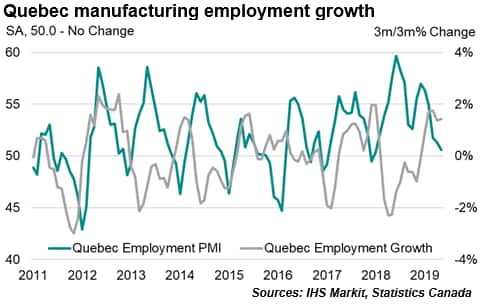 May PMI data also highlighted the persistent weakness in foreign demand conditions for Quebec manufacturers, registering the fastest contraction in export sales since February 2017. Moreover, the rate of decline was sharper than the downturn observed for Canadian manufacturers as a whole. 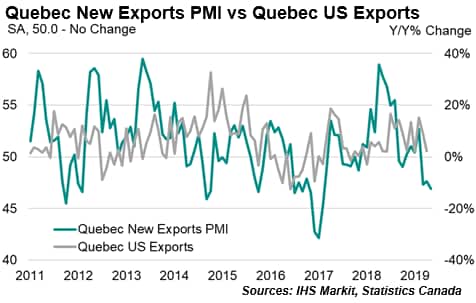 The latest data signal a broad stagnation of Quebec manufacturing exports to the US, with the New Export Orders PMI signalling a further deterioration in the coming months.

In line with the picture for output and new orders, inflationary pressures have eased notably from a recent peak in mid-2018. The Quebec PMI prices charged index has tended to provide an advance indication of coming price pressures, and is currently signalling a CPI rate of around 1%. 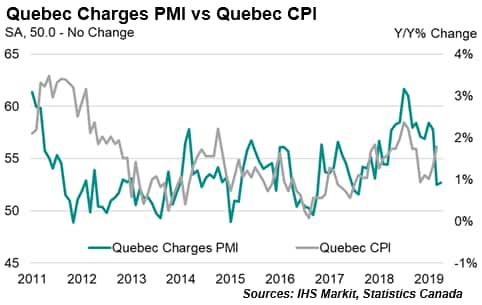 The latest PMI data for Quebec points to the likelihood of a slight easing of business conditions for manufacturers continuing into June, with weaker trends for job creation, production growth, new business and purchasing activity recorded in May. Moreover, when looking at the relationship between the PMI and official data, there is a trend towards slower job creation. Headwinds look set to continue, following the softer rises in both overall manufacturing sales and overseas orders (especially US exports).

For manufacturing output across Quebec, IHS Markit forecasts an expansion of 1.1%, similar to the 1.0% forecast for the Canadian manufacturing sector as a whole. 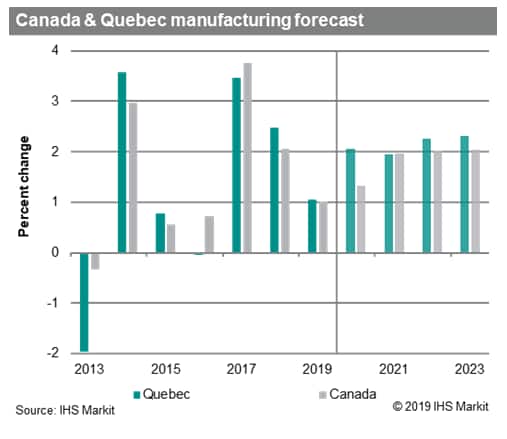