Final FRTB text: Is the light finally green for modellability?

The alarm around non-modellable risk factors seems to have faded in the long-awaited final version of the FRTB Market Risk Framework published by the BCBS on January 14. But do the numbers support it?

As a reminder, the original FRTB framework required risk factors to be observable 24 times a year and at least once a month to be eligible for expected shortfall under IMA. The industry (and our analyses) quickly demonstrated that the binding constraint was the gap requirement (once a month) rather than the count of 24 - which had some firms wondering whether they would have to reschedule their traders' holiday calendars. There was even talk of abandoning seasonal markets such as credit. In a previous post we called this unintended consequence the "FRTB Scrooge of Christmas" effect and the industry lobbied for a relaxed gap criterion of three observations every 90 days.

On the face of it, Basel's response is pretty accommodating by offering the following optionality: either the risk factor is observable 24 times a year and at least four times in 90 days or it can pass by achieving 100 observations in a year. At IHS Markit, not only are we fortunate enough to have tens of millions of cross-asset Real Price Observation (RPOs) across Interest-Rates derivatives, Credit Derivatives, Bonds, Equities and FX (and that's before any additional pooling from the banks), but we also have the analytics infrastructure to run such studies on the fly. This article will thus attempt to quantify the regulatory option and explore the fruits of industry advocacy.

Our data shows that the second leg of the criteria (100 observations in a year) has virtually no impact in terms of reducing the number of NMRFs for alternative 2 (using the regulatory buckets). So instead we will focus on the change in the original gap criterion: one per month became four in 90 days. As previously, this affects risk factors passing the count but failing the gap (the ambers of our RAG coloured heatmaps!).

As rates dominates capital for most firms, we thought we'd start there: unfortunately, only 13 out of 379 (i.e. 3.5%) Interest Rate fixing tenor risk factors now pass the RFET where they previously didn't (Amber). Examples include the long end of CZK.3m and PLN.3m curves and a few middle buckets of HKD.1m, SGD.6m.

However, the improvement is quite significant on markets suffering from structural or behavioural seasonality such as cash bonds or CDS. Below is the result of a study on the aggregate CDS single names and cash bond universes respectively.

Out of 3.2k traded CDS issuer buckets, the 592 previously modellable ones are joined by another 264 amber risk factor buckets to achieve 26% overall modellability.

The next question is what level of granularity is required to pass PLA: is issuer-level sufficient? Predictably, the lower the granularity, the lower the modellability pass rates: when combining issuer, currency and doc clause, overall modellability falls to 19% under the final rules (vs 13% on the previous rules so still an improvement!). Alternatively, banks have the option to capitalise just the basis between non-modellable issuer curves and modellable country/sector/rating curves - which we will explore in a later article.

This is all well and good in terms of improving the previous version of the FRTB framework but does it live up to industry lobby expectations? Originally the industry proposed a gap criterion of three observations in 90 days. Could one more observation per quarter have made a material difference?

For our 3.2k traded CDS issuer buckets, of which the modellable sub-set is shown below, the answer is a 3% modellability decrease between three and four in 90 days. The graph below demonstrates how this varies with the granularity of the CDS curves. 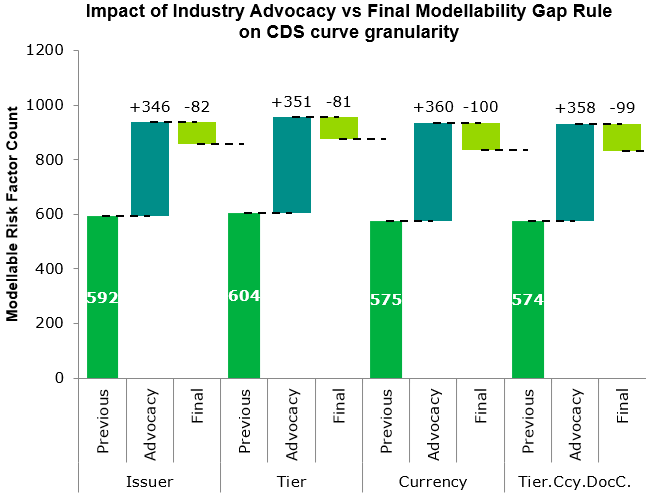 In the much larger cash bonds universe of over 100,000 issue-maturity risk factors, the previous rules yielded roughly 14% modellable risk factors whereas the new gap criterion achieves a whopping 25% MRF. This jump of almost 80% can be seen by the increase in the height of the green bars in the graph below.

Clearly the materiality from a capital perspective of this will be very desk and portfolio specific. It will also depend on the risk factor configuration in the planned IMA model. For banks to make the right decisions, not least on whether to go for IMA for a given desk, it is crucial to capture the benefits of proxies which can constitute a significant portion of capital via the SES NMRF charge. Our experience suggests that a surprising number of firms still lack sufficiently realistic assessments of the full IMA round-trip and risk which can lead to sub-optimal and even irreversible decisions around development or model approval.

Learn more about our FRTB data and analytics offering