FERC staff's "2019-2020 Winter Energy Market Assessment" was presented at the Commission's open meeting on October 17, and it came to the same conclusion that other analyses have done so far this fall: with abundant gas supplies and a mild or normal winter forecasted, all indications are that prices will remain low and shortages will not emerge.

"Going into this winter, natural gas storage levels are close to the five-year average and natural gas futures prices are lower than last winter. Also, pipeline additions in the Permian and Marcellus Basins have bolstered the fuel supply chain, allowing additional natural gas supplies to reach markets," staff said. "However, certain regions are more dependent on natural gas than others, and pipeline outages have the potential to increase both electric and natural gas price volatility. Coal and oil-fired generation continue to play an important role in maintaining electric reliability during the winter, especially in the Northeast, where winter demand for natural gas can exceed pipelines' capacity."

Those latter comments—again bringing up the sore spot of the Department of Energy telling FERC nearly two years ago that it should find a way to prop up coal and nuclear power generators—brought out some comments by FERC Commissioner Richard Glick and rebuttals from his fellow commissioners (more on their exchange below). But otherwise, the three commissioners seemed satisfied that the market is in good shape this winter, especially in gas.

First, the weather. Staff reported that the National Oceanographic and Atmospheric Administration is forecasting warmer than average winter temperatures are in the Northeast, West, Texas and Florida. The Upper Midwest is expected to experience normal conditions.

But, being ever cautious, FERC staff tempered this prediction of a calm winter with the following: "However, as seen in previous winters, acute cold weather events can occur during warmer than average seasons. These events increase the short‐term demand for natural gas and electricity, which could create significant operational and market challenges."

Natural gas continues to grow its share of the heating and power market, so the condition of gas inventories and delivery capability are critical in winter. FERC staff reminded the commissioners that total US gas inventories on April 1 were about 30% below the five-year average, but record gas production has led to the fastest injection rate since 2015, and as of the week ending October 11, EIA reported that the gap was basically eliminated.

More injections are expected in the next few weeks before the deeper cold of winter starts to create a net pull on gas, and so inventories are expected to exceed the five-year average (see graph). 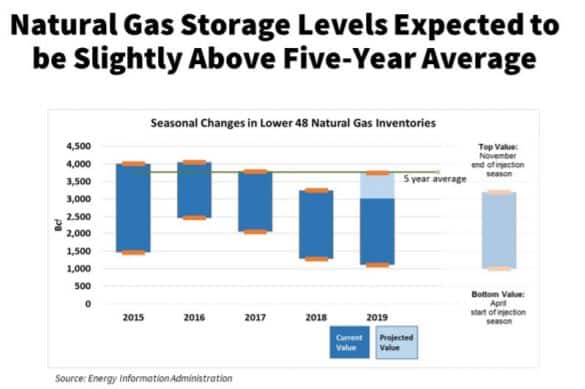 But staff nonetheless returned to the issue of "fuel availability," stating that "availability of coal and fuel oil" can be important in cold-weather periods. This drew a rebuke of sorts from Glick, who asked how coal, which he said provides 2% of power in New York and less in New England, can have an impact. Staff avoided giving a response by falling back on the term "fuel diversity."

Regardless of the coal-nuclear-gas debate, in the short term, gas users and traders have recognized that gas is abundant, and prices are well below those of a year ago. "As of October 4, 2019, the NYMEX Henry Hub futures price, which measures the general cost of the natural gas commodity, was 73 cents below last winter's average futures settlement price, with an average price of $2.56/MMBtu for January and February 2020," staff said. 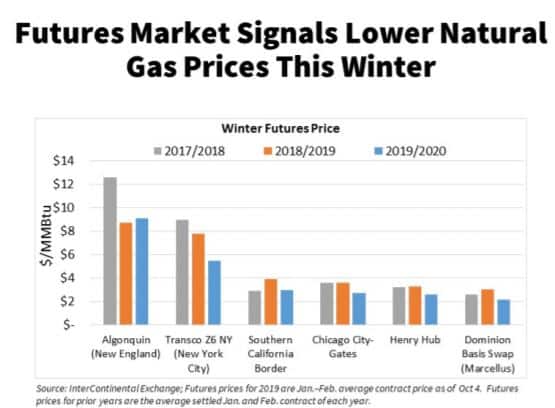 Chatterjee asked about the high prices in New England, which have been blamed for many years on a lack of sufficient gas pipeline infrastructure. Staff response addressed this only indirectly, by noting that both Algonquin and Texas Eastern have said that they will have to reduce deliveries for periods of time this fall to conduct integrity testing, and this this could account for some of the price discrepancy.

Meanwhile, gas production records continue to be set, with EIA marking the first half of 2019 as having production 12% above the same period last year, at 90 Bcf/d. But demand also is rising, as EIA forecasts a record 112 Bcf/d demand in January 2019, or about 3 Bcf/d above last January's record.

Where is record demand coming from? FERC staff said electric power generation "is a driver of the forecasted increase in domestic demand this winter, with an expected year-to-year increase of 6% to 27 Bcfd. Industrial natural gas demand is also expected to increase, but only by 2% to 25 Bcfd. However, residential natural gas demand, which is typically the biggest driver of peak winter demand, is expected to decrease 3% to 25 Bcfd."

The other demand factor, of course, is LNG exports. "Since the beginning of 2019, the consumption of feedgas, which is natural gas used as a raw material for LNG liquefaction, has grown over 1.5 Bcfd—from 4.5 Bcfd to more than 6 Bcfd. From March to October 2019, more than 3 Bcfd of new LNG export capacity went in-service, representing the largest concentration of capacity additions in the short history of U.S. LNG exports," staff noted.

This led Chatterjee to ask if the trend will continue, or it's peaked. Staff said that they see another 1.5 Bcf/d of LNG capacity coming online by mid-year 2020, but that the next wave of large capacity additions is not likely until 2023.

In addition to expressing his skepticism that coal power is important in New York or New England, Glick listed a few other complaints with both the process to develop the winter assessment and its contents. This laid bare the rift between him and the Republican commissioners, and McNamee answered Glick in several instances.

Twice Glick said that FERC broke with prior practice by having staff present the winter assessment without the commissioners having a chance to review it and comment in advance. He criticized this new policy and said it would lead to a report that is less comprehensive and accurate. "This has been true for every single report beforehand—before someone complained about it—that the commissioners had a chance…to comment if there were questions or maybe some numbers that might not seem correct…" he said.

McNamee took the bait after Glick's second comment, saying that while he believes the commissioners should have input into the report, it should come after it is released. "I think it's very important for the staff to give us their unvarnished view of these issues and for us not to scrub what you want to tell us," he said. "We can respond to it…but I think it's very important that you present this information."

Chatterjee answered more succinctly: "That's why we have this opportunity to ask questions."

And so, Glick did ask questions. In a slide on the report, FERC staff noted that 3.4 GW of coal power plants retired from March 2019 to June 2019 and another 6.2 GW are expected to retire from July 2019 through February 2020. To some degree, this is offset by 5.6 GW of gas-fired capacity that's been added in the last year.

So far, so good. But Glick asked staff why their assessment did not also state the even greater increases in wind power (12 GW) and solar (6 GW) since last winter—basically, challenging their report for overstating the impact of the coal retirements.

McNamee responded by saying that those capacity additions are misleading because coal power plants can run at 85%-90% capacity for long periods of time (and higher when needed), while solar and wind have run rates of 25%-50% of capacity. "You can't just measure the megawatt capacity, the nameplate capacity, but have to look at its availability to run when you're considering how to meet energy system need," McNamee said.

McNamee's comment also referenced to Glick observing that looking at reserve margins as the measure of system reliability could lead to "over-procurement" of power production in general.