Insights from the Federal Reserve's Beige Book: Re-openings spur spending and hiring in Midwest and Northeast

The relaxation of business closures intended to slow the spread of COVID-19 led to higher economic activity in most parts of the country from late May through June according to the US Federal Reserve's latest Beige Book report, containing anecdotal information from regional business contacts. A resurgence in COVID-19 cases, increased uncertainty, and the return of some business restrictions in California and parts of the Western US have resulted in slower gains in the West and Mountain West regions. Pent-up demand for automobiles led to a sharp uptick in auto sales in every region, but spending at retailers and restaurants was strongest in the South and Midwest. Tourism in Hawaii and in urban destinations such as New York and southern California remained significantly depressed because of dramatically lower international travel. Firms in all regions began to recall furloughed workers, but concerns about worker safety and childcare needs restrained hiring in retail and hospitality sectors in the Northeast and South. The restarting of auto plants in the Midwest and Great Lakes resulted in a sharp uptick in manufacturing hiring and production activity. Construction activity resumed in many areas, and homebuilders reported greater-than-expected demand in the Great Lakes and South while home sales increased in less-expensive areas of Idaho and eastern Washington. 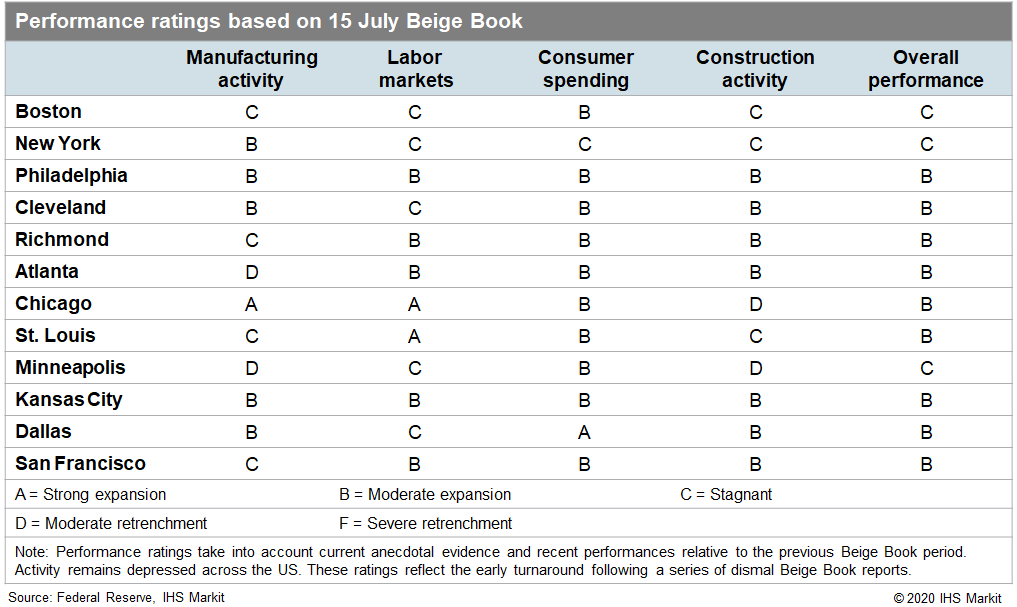 Consumer spending rebounded across the country as businesses began to reopen and people ventured out to spend in person. Gains were relatively soft in New York and the rest of the Northeast as business travel and urban-destination tourism remained "moribund" and "inactive." Leisure travel to drivable beach and mountain destinations boosted spending from the Northeast south to Florida. With business and international air travel at minimal levels, tourism spending in Hawaii was severely sluggish and southern California retail suffered from a lack of foot traffic. Auto sales were sharply up in most regions because of pent-up demand. Boat, all-terrain vehicle (ATV), and recreational vehicle (RV) sales boomed in the Midwest and Texas as consumers began to look for ways to spend leisure time closer to home and away from airports. Restaurants struggled with maintaining sales levels in Missouri and Arkansas, while restaurants and bars in California and other parts of the West faced the scaling-back of operations as COVID-19 cases made a resurgence in late June.

Labor markets improved slightly in the Northeast and around the Great Lakes, while employment rose quicker in parts of the South and Midwest. Firms in every region began rehiring previously furloughed workers to meet demand as businesses reopened with the largest gains in the retail, leisure, and restaurant sectors. Businesses in the West hired "a fraction" of those laid off because of pandemic-related closures, while Hawaii tourism firms expect to rehire one-tenth of their laid-off workers in the next few months. Weak demand in the Great Lakes resulted in limited employment growth, and mass layoff announcements in the Dakotas and Minnesota rose in June. Energy-sector layoffs in North Dakota became widespread. In the eastern half of the country, firms noted that safety concerns, the need for childcare, and generous unemployment benefits made recalling workers more difficult. Companies that received Paycheck Protection Program loans indicated that further layoffs will be necessary if demand from consumers does not rematerialize at a quicker pace.

Manufacturing activity picked up strongly in the Midwest and Great Lakes regions as automakers and their suppliers restarted production. Production also rebounded in the Northeast as food manufacturers saw strong demand for their products. Aerospace-sector producers in the Northeast and Midwest saw declines in their commercial businesses as the pandemic-induced travel recession is expected to last until 2022, resulting in fewer deliveries of new aircraft to airlines. Food and beverage manufacturing bolstered activity in Texas and the Plains states. Firms in the upper Midwest noted that new orders and activity contracted as customers entered a "wait and see" mode. Uncertainty about the future course of the COVID-19 pandemic increased in many regions and is leading to sluggish gains. Continued declines in oil and gas production in Texas depressed activity further.

Construction activity rose in Pennsylvania and parts of the South and improved in Texas and areas along the West Coast as residential real estate activity resumed. New homebuilding was sluggish in the Northeast and resulted in "substantial" drops in inventory in and around Massachusetts. Motivated by low mortgage interest rates and the desire for more "elbow room," buyers in Pennsylvania boosted home sales in suburban areas. Home construction rose in the West with reports that many families have begun moving away from high-cost metro areas to Idaho and eastern Washington as firms transition to permanent remote work. Construction was sluggish in the Midwest and Plains states while demand for new homes greatly outstripped supply around the Great Lakes with buyers encouraged by low mortgage rates.

This month's Beige Book pointed to the beginnings of a recovery from the initial business shutdowns meant to mitigate the spread of COVID-19. While most regions saw large rebounds in retail, restaurant, and tourism hiring as businesses began to reopen, an upturn in new infections in late June and July compelled many states in the South and West to pause their reopening plans. The acceleration of the pandemic will result in slower consumer spending and hiring in these states. The long-term duration of social distancing measures will further delay a full recovery in "socially dense" activities such as indoor dining, concerts, and sporting events in all regions. States in the Northeast and Midwest that had better initial success at slowing the spread of COVID-19 will see relatively stronger hiring and spending in the near term, but raging outbreaks in other parts of the country will threaten their recoveries.