A stronger expansion of business activity in November defied economists' expectations of a slowdown, but is unlikely to prevent the eurozone from suffering slower growth in the fourth quarter, especially as rising virus cases look set to cause renewed disruptions to the economy in December.

A mix of near-record supply delays, an unprecedented surge in prices and renewed COVID-19 worries has meanwhile pulled business optimism to the lowest since January, adding to near-term downside risks for the eurozone economy.

The headline IHS Markit Eurozone Composite PMI rose for the first time in four months in November, climbing from 54.2 in October to 55.8 according to the 'flash' reading*. Although indicating an improvement in the rate of growth from October's six-month low and remaining above the survey's pre-pandemic long-run average of 53.0, the average reading for the fourth quarter so far, at 55.0, is substantially lower than the 58.4 average seen in the third quarter, pointing to a weakening of economic growth in the closing quarter of 2021. 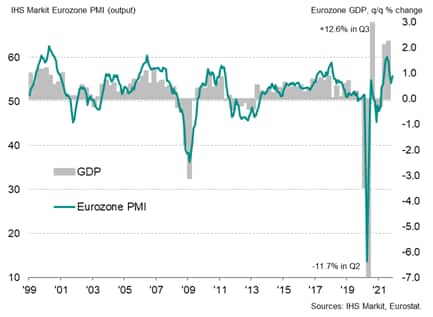 By sector, services outperformed manufacturing for a third straight month, recording the strongest growth of activity for three months. Growth also picked up in manufacturing, though remained the second-weakest seen over the past 17 months. 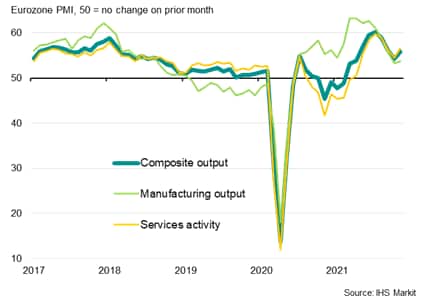 Both sectors saw growth improve on the back of slightly stronger inflows of new business, yet in both cases rates of growth of demand remained well below that seen during the summer months.

In manufacturing, growth was held back in particular by a third successive monthly drop in production in the autos sector. More positively, especially robust expansions were seen for tech equipment, food & drink and household goods.

In the service sector, the weakest performance was recorded for tourism & recreation, where growth hit the lowest since May due primarily to rising virus infection rates.

By country, growth accelerated in Germany and France, with the latter recording the stronger expansion for the second month in a row thanks to the sharpest rise in services activity for nearly four years, which offset a second successive monthly drop in factory output. The rest of the region as a whole meanwhile enjoyed faster growth of both manufacturing and services than seen in France and Germany.

Especially weak factory output growth was again seen in Germany alongside a subdued service sector expansion, though in both sectors, the rate of growth improved on October. 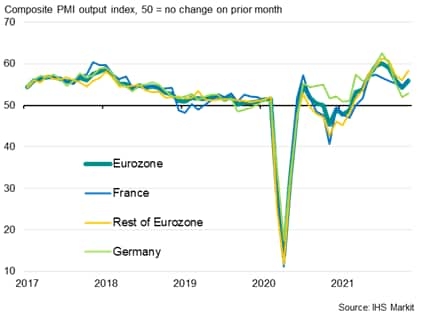 Weak factory output growth was again commonly attributed to supply constraints. Suppliers' delivery times continued to lengthen at one of the steepest rates seen over more than two decades of survey history, easing only modestly compared to October, amid ongoing supply shortages and transport problems. 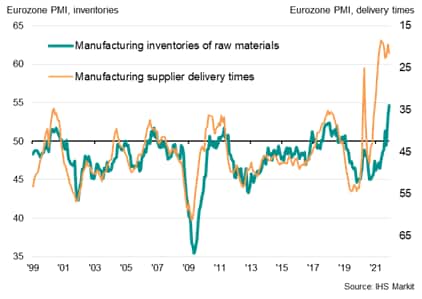 Fears over supply issues contributed to further inventory building by manufacturers, with November seeing a record build-up of warehouse stocks for the second month running as firms increased their purchases of available inputs.

Despite hiring stepping up across both manufacturing and services, resulting in the second-largest gain in employment recorded over the past 21-years, backlogs of work continued to rise at an elevated pace, increasing at the sharpest rate for three months to hint at ongoing constraints. Backlogs rose more sharply in manufacturing, led by Germany, but also grew to an increased extent in services.

Shortages were meanwhile once again seen as a principal driver of higher prices for many goods and services, alongside higher shipping costs, rising energy prices and increases in staff costs. November consequently saw a survey record increase in firms' input costs for a second successive month, with unprecedented rates of inflation recorded in both manufacturing and services. 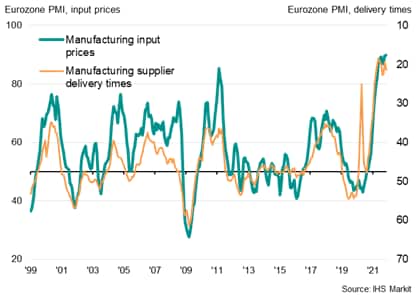 Selling price inflation likewise accelerated in both manufacturing and services to the fastest in almost two decades of comparable survey history as firms sought to pass higher costs on to customers, most notably in Germany. 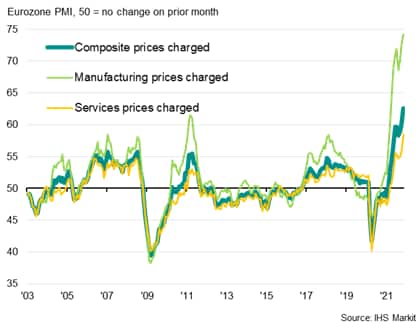 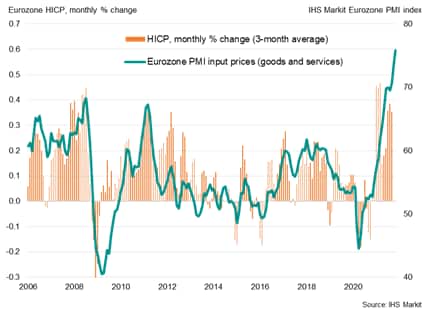 Finally, future output expectations deteriorated to the lowest since January. Ongoing concerns over supply chain issues were exacerbated by growing worries about the impact of further COVID-19 waves, which darkened the outlook for services in particular. Optimism in manufacturing improved from October's one-year low, though remained subdued by supply and price worries.

Thus, while a stronger expansion of business activity in November defied economists' expectations of a slowdown, it is unlikely to prevent the eurozone from suffering slower growth in the fourth quarter, especially as rising virus cases look set to cause renewed disruptions to the economy in December.

The manufacturing sector remains hamstrung by supply delays, and the service sector's improved performance may meanwhile prove frustratingly short-lived if new virus fighting restrictions need to be imposed. The travel and recreation sector has already seen growth deteriorate sharply since the summer.

Not surprisingly, given the mix of supply delays, soaring costs and renewed COVID-19 worries, business optimism has sunk to the lowest since January, adding to near-term downside risks for the eurozone economy and complicating the picture for a central bank that is concerned over the upsurge in inflationary pressures and rise in asset prices. 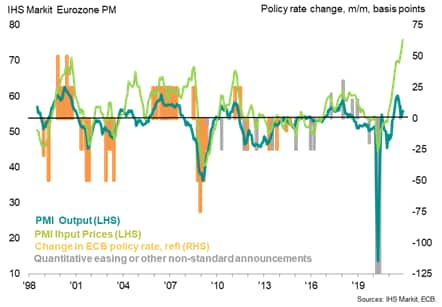 IHS Markit's November forecast update puts eurozone real GDP growth at a little under 0.5% q/q in the fourth quarter of 2021 and the first quarter of 2022, much slower than the average growth rate of over 2% seen in the second and third quarters of 2021. Growth should then pick up as supply-chain disruptions and COVID-19-related constraints ease, but at 3.7% our 2020 eurozone GDP forecasts are currently around half a percentage point below the consensus.

Just as growth picks up again in 2022, base effects should help cool inflation. Our current forecast for the average HICP inflation rate in the fourth quarter of 2022 is just 1.4%. though this assumes no significant pick up in pay growth, which remains a key area of uncertainty.

The increasingly elevated inflation rates that we are likely to see in the coming months will nevertheless add to the call from some ECB policymakers for a faster withdrawal of policy stimulus. We therefore expect the ECB to cease net asset purchases under the Pandemic Emergency Purchase Programme (PEPP) in March 2022, in line with the ECB's forward guidance, but the ECB's rate hike cycle is expected to begin only in the first half of 2024. That said, the recent upsurge in COVID-19 cases opens up the possibility of a more extended period of net asset purchases.