Fast Transition: Defining a pathway to 90% decarbonization of electric power in North America

Greenhouse gas emissions in the power sector are down 27% in the United States and 36% in Canada since 2005. This transition has been driven to a large extent by the abundance of low-cost natural gas, coal generation retirement, and the growth of renewables. Current state, provincial, and federal-level policies, as well as the availability of low-cost renewable resources, will drive further power sector decarbonization, but multistate and provincial coordination will likely become more difficult and maintaining reliability more expensive, posing headwinds that only further national policy will be able to counter.

The IHS Markit Planning Case anticipates US and Canadian power sectors achieving 64% and 57% emissions reductions by 2050. Though there is notable renewable growth in both countries, low-cost natural gas retains a significant market share, limiting steeper declines. The Planning Case also assumes a relatively "light hand" on the electrification of non-electric energy end uses, and as a result, economy-wide carbon emissions decline only 20% and 2% by 2050 in the United States and Canada relative to 2005 levels.

Fast Transition represents a major departure from the Planning Case

The accelerated transition is underpinned by an all-of-the-above policy push at the national and subnational level. The combined policy push of end-use electrification and power sector decarbonization achieves economy-wide carbon emission reductions exceeding 70% in both the United States and Canada.

Fast Transition's low-CO2 power supply mix evolves in two phases. Initially, generation capacity additions ramp up well beyond historical levels, as energy end-use electrification leads to substantial demand growth. Later, from the mid-2030s onward, the generation mix is increasingly dominated by the goal of having the power system's carbon emissions 90% below 2005 levels by 2050, with new additions pushing out the remaining emitting resources. 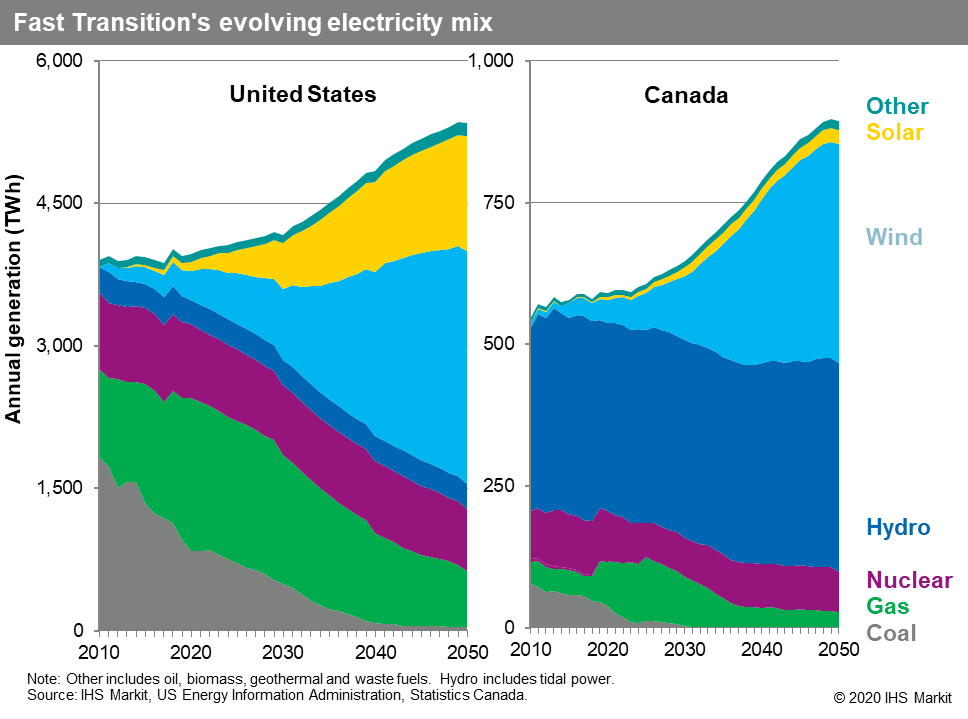 State and provincial ambitions and federal policy support combine to drive a nearly tenfold growth of wind and solar capacity in the United States and Canada.

Power sector reliability is maintained with a mix of flexible resources

A key challenge in achieving over 90% power sector decarbonization is maintaining system reliability to meet daily, monthly, and seasonal variations in power demand and renewable resource availability. Fast Transition provides this reliability with:

What percentage of January’s debt issuances were targeted at refinancing? #IHSMarkitEnergyStats https://t.co/w1GOirfh97

#Renewables now are the cheapest source of #electricity in South Asia. The LCOE for #onshorewind and solar photovol… https://t.co/gMEfF2Ou3S

2020 is a pivot point for the #oilmarket. Market conditions & investments aligned for a stronger move toward the… https://t.co/3JAsQdgO8E