The latest official data showed US manufacturing falling in the first quarter, corroborating the renewed downturn signalled in advance by IHS Markit PMI survey data. The survey data also hint at weakness persisting into the second quarter, with the forward-looking order-to-inventory ratio falling in March to its joint third-lowest since May 2009. 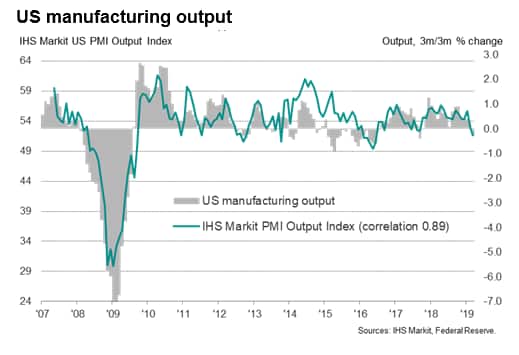 The latest release of official factory output data from the Federal Reserve showed production dropping 0.3% (1.1% annualised) over the first quarter, having stagnated in March after falling in both January and February. Analysts had on average expected production to rebound in March, but PMI survey data from IHS Markit had forewarned of a downturn.

The quarterly decline is the first registered by the official numbers since the third quarter of 2017, which was also the last time that the PMI had indicated a downturn.

IHS Markit's PMI survey has in fact correctly indicated every turning point in the manufacturing cycle since data were first collected 12 years ago with the sole exception of the downturn in early-2015, which was a time when the official data showed undue volatility.

The survey's output index exhibits an 89% correlation with the three-month-on-three-month rate of change in the official series (which is widely used as a comparable series as it is less volatile than the month-on-month change, and also helps give quarterly rate of change signals). The IHS Markit PMI also outperforms the ISM index, which shows a lower (81%) correlation over the same period, and which has also exaggerated growth in the past two years (see chart below). 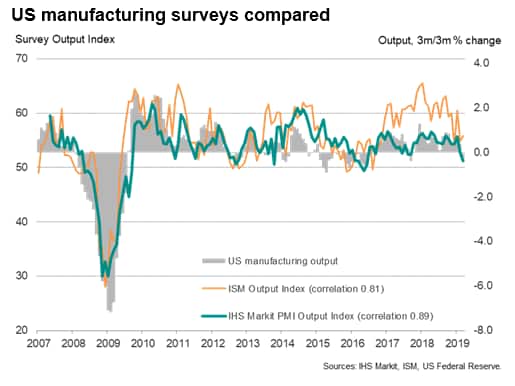 To calculate the implied rate of change in the official data we use a simple OLS regression model which uses the PMI output index as the sole explanatory variable of the three-month change in manufacturing production. The implied decline in output in the three months to March was -0.1%, albeit with the rate of contraction accelerating to -0.6% in March alone.

Insights into whether the manufacturing downturn has persisted into the second quarter will be provided by the flash PMI for April, released Thursday 18th April. In the meantime, we use the ratio of new order inflows to inventories of finished goods indices to provide clues as to future production: if new orders are rising but warehouse inventories have fallen, then companies will tend to ramp up production to meet the new demand, and vice versa. In March, this ratio fell to its lowest since June 2017 (when it correctly foretold to the prior downturn) and its joint third-lowest since May 2009. 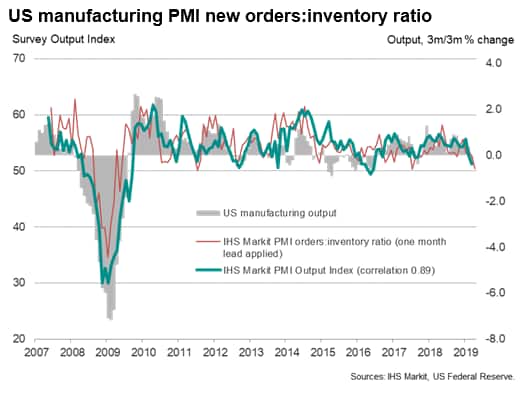