November data pointed to a third successive month of efficiency loss across the eurozone. Manufacturing was the main drag on productivity, posting the sharpest drop in close to six-and-a-half years, as goods producers in France joined their counterparts in Germany and Italy in contraction. Across the eurozone service economy, workforce efficiency worsened only fractionally as Italy returned to growth territory. 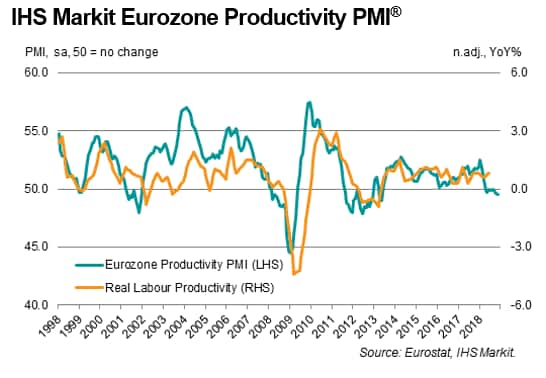 Down from 49.6 in October to 49.5 in November, the seasonally adjusted Eurozone Productivity PMI® - derived from IHS Markit's national manufacturing and services PMI survey data - was at its lowest mark in five-and-a-half years. While service sector productivity moved closer to stabilisation, the downturn among factories was the steepest since August 2012.

Germany recorded a sharper contraction in aggregate productivity than France. The latest fall was the joint-fastest since August 2012. The accelerated downturn was widespread across the two monitored sectors. Manufacturers posted a solid drop that was the most pronounced in close to seven years amid a solid upturn in employment and only marginal uptick in production. A quicker, albeit marginal, worsening of labour performance was noted in the service economy.

Italy was the only nation to not see a fall in output per head. This occurred due to a deterioration in manufacturing being offset by gains in services. The former recorded the sixth fall in as many months, but the rate of reduction moderated to the weakest since mid-year. While factory production declined markedly in November, job creation was sustained. After being stationary in October, productivity at service providers strengthened as growing workforces supported a renewed increase in business activity.

Workforce efficiency in France worsened for the first time in four months due to subdued performances in both the manufacturing and service sectors. Although slight overall, the reduction in output per head at factories was the fastest seen since September 2015. Productivity in the service sector displayed a renewed fall, though one that was fractional.