Since the oil price collapse in late 2014, the U.S. deepwater Gulf of Mexico (DWGOM) has been in flux. The region has seen a series of mergers and acquisitions. Several major, established operators have pulled out of the region altogether, which has allowed smaller players to gain entry or expand their footprint. The downturn has also led companies to shed their legacy DWGOM producing assets to pursue potentially more lucrative global opportunities. Recent industry news sources report that ExxonMobil is currently marketing a portfolio of their assets in the US Gulf.

The company currently has equity stakes in 14 fields in the U.S. DWGOM, operating four of them. One of their larger holdings includes a 50% operating interest in Julia field, a producing Wilcox field. ExxonMobil also holds substantial participating working interest in BP's Thunder Horse field complex, Anadarko/Occidental Petroleum-operated Hadrian North and Lucius fields, and Shell's Ursa and Princess fields. Strong candidates for possible sale would likely be older, marginal assets or properties where the company holds a small working interest. Hoover, Madison, and Marshall fields, a closely grouped trio of properties that the company operates in the Western Gulf, and Chevron's Genesis field fall in the former category, while St. Malo, Heidelberg, and Llano fields reside in the latter. 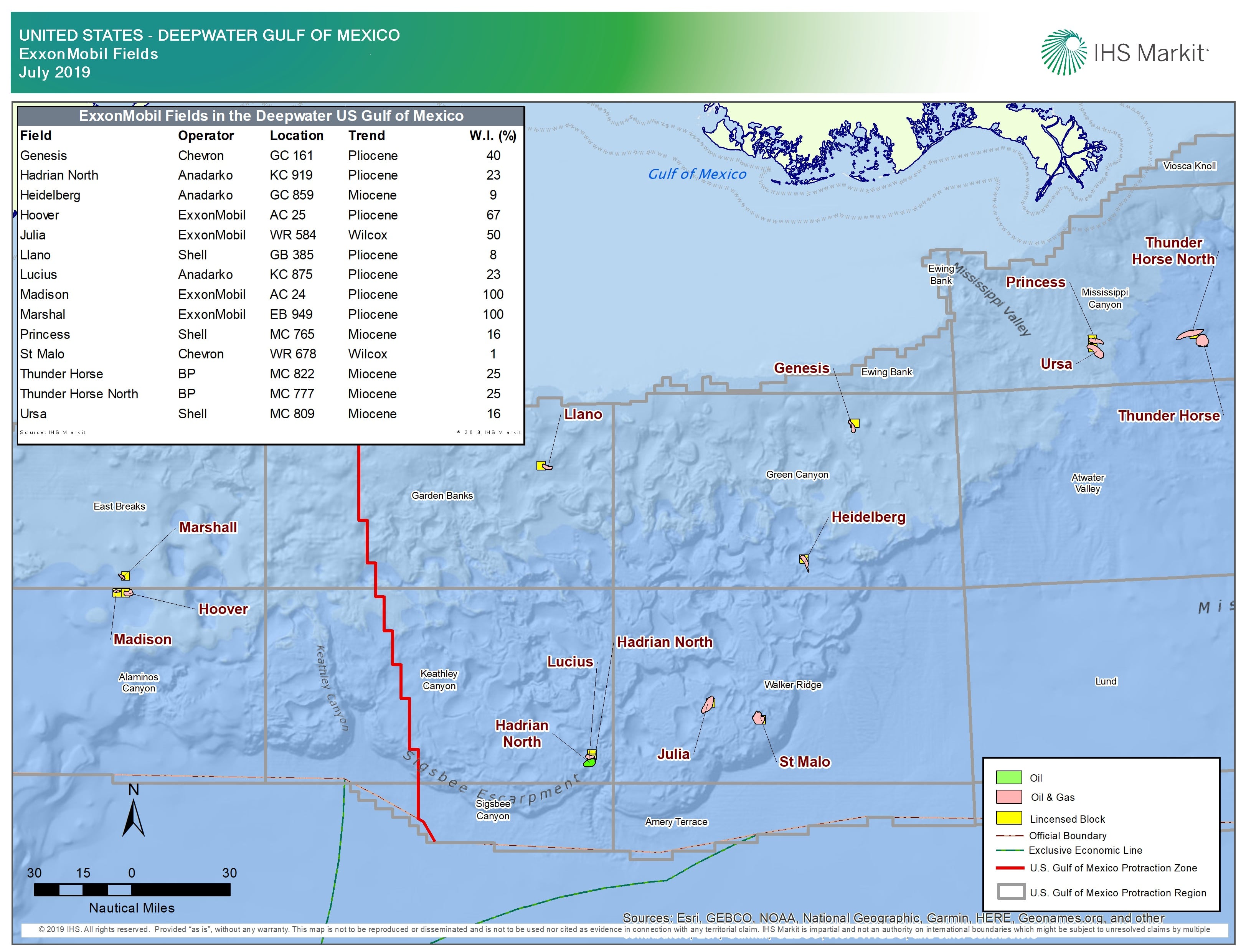 While ExxonMobil may be looking to sell some of its holdings, the company is still maintaining a presence in the US Gulf. At the end of 2018, ExxonMobil held the seventh largest land position in the US deepwater, owning 2,295 net sq km (567,100 acres). It currently owns a stake in 117 deepwater leases, mostly in the Central Gulf, operating 92 of them. As recently as August 2018, ExxonMobil won the most blocks and was the biggest spender at Sale 251, reeling in 25 of the 26 tracts it bid on while paying out USD 40.5 million in bonus money.

Using IHS Vantage® to determine valuations of these assets, coupled with publicly available articles that suggest the value of assets to be divested by ExxonMobil at up to US$ 1.5 billion, we can begin to see more clearly what assets may be available for sale. 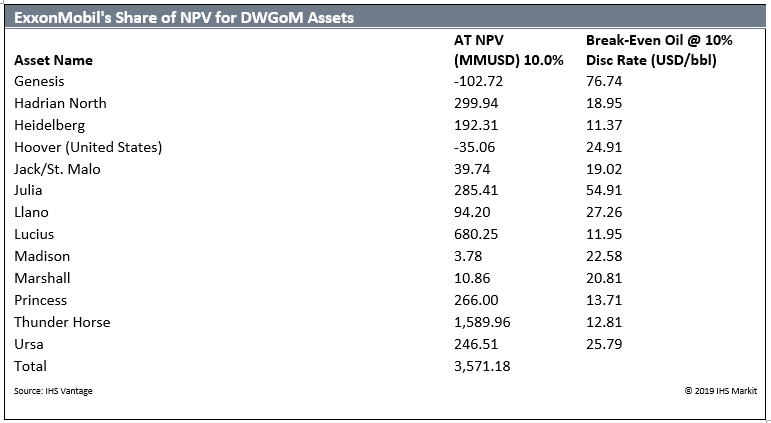 In theory, any of these assets could be for sale, however let's focus on the likely candidates that were previously mentioned; Genesis, Heidelberg, Hoover, Jack/St. Malo, Llano, Madison, and Marshall. ExxonMobil's share of their NPV (at a 10% discount rate) is just over US$ 340 million, excluding the negative NPV-10 assets. The negative NPV-10 is a result of the assumptions used for the valuation, and these assets can change to a positive valuation if lower discount rates are used, production output is increased, or other factors, such as commodity prices, are changed. As they are smaller assets, it opens the door for a wide range of possible suitors, from large companies to those looking to enter the region for the first time. INEOS and Repsol have stated interest in some of these assets.

Currently within IHS Vantage®, INEOS and Repsol's individual portfolios have a PV-10 value of US$ 2.683 billion and US$ 34.091 billion, respectively. If Repsol were to take over ExxonMobil's share of the seven assets at PV-10 mentioned in the previous paragraph, the portfolio value would rise to US$ 34.382 billion. Similarly, INEOS's portfolio increases to US$ 2.971 billion.

Based on this analysis, the acquisition of these assets would be slightly more beneficial to Repsol's portfolio. While the difference seems subtle, this move adds US$ 3 million more to Repsol's portfolio than it would to INEOS's. Since Repsol has assets in the US, IHS Vantage® ensures that the tax benefits of addition of new assets within the same region are accounted for. This advantage is not enjoyed by INEOS, for whom a transaction such as this would be its first entry into DWGOM. The tax benefits to Repsol could increase if more assets are added to the deal. Ultimately, it appears Repsol may be a more likely candidate to pursue ExxonMobil's suggested sale.

Learn more by reading this preceding blog on subsea tie-backs de-risking the deepwater Gulf of Mexico.

Isaac Nuti is a Senior Research Analyst at IHS Markit

In recent years, the deepwater #GulfofMexico has made progress to adjust to a lower oil price environment. However,… https://t.co/kcYGRNHYxV

How many M&A transactions were declined in January? #IHSMarkitEnergyStats https://t.co/lQHfZIIxSE