Factories worldwide continued to report falling export sales in July as disruptions to demand and supply from COVID-19 lockdowns exacerbated the damaging impact of trade wars seen prior to the pandemic. However, the downturn in trade has moderated considerably since the height of the virus lockdowns, buoyed by signs of improved consumer spending and led by resurgent demand in the euro area. Weak demand for exports continued to act as a major brake on growth in Asia, with Indonesia, Thailand and Japan seeing the sharpest export downturns so far this year.

The JPMorgan Global Manufacturing PMI survey, compiled by IHS Markit from its proprietary business surveys, rose above 50 in July - signalling an improvement in business conditions - for the first time since January. The upturn reflected rising output as firms reopened in increasing numbers after COVID-19 lockdowns, as well as an increase in new orders received by factories during the month. 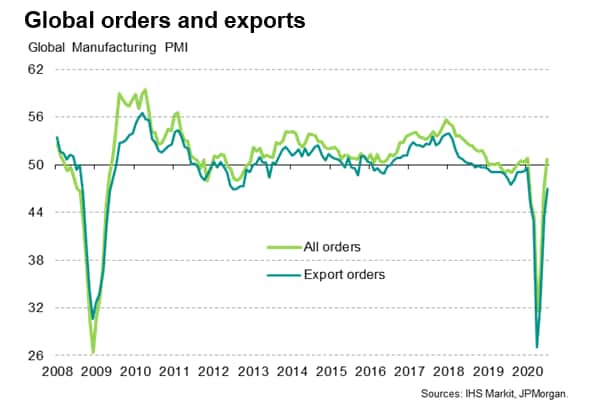 However, the increase in new orders remained subdued relative to output, hinting at still-weak levels of demand. In particular, international trade continued to act as a major drag, with export orders falling globally once again, albeit at the slowest rate for six months.

Weak trade was linked to disruptions to demand and supply chains caused by the pandemic and disrupted supply chains, but also reflected the lingering impact of trade wars. Global exports have now fallen continually since September 2018. 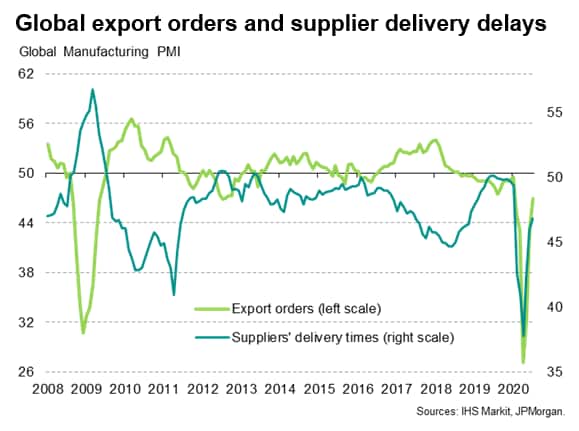 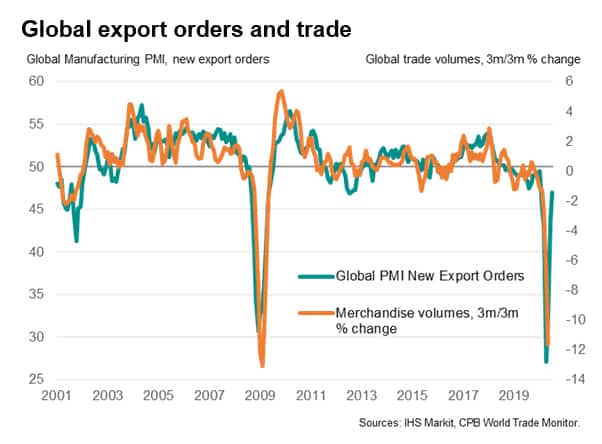 While the PMI's global new export orders index has started to show strong gains since the all-time low recorded back in April, when it was broadly consistent with an 11% quarterly rate of contraction of global trade (or 14% of a non-linear model is used to determine the PMI's trade growth signal), it nevertheless remains at level indicative of trade still falling at a quarterly rate of approximately 1% in July.

Looking across the different types of good exports, the mildest downturn globally was recorded for consumer goods, likely reflecting reopening of retail stores in many countries after high street lockdowns amid the pandemic. Exports of investment goods (such as plant and machinery) and intermediate goods (inputs supplied to other companies) suffered steeper falls, though in three cases the rate of contraction has moderated considerably since peaks seen back in April. 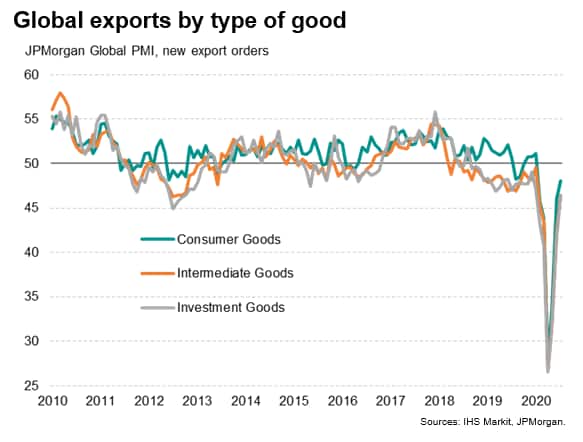 Across 28 countries for which we analysed PMI export data in July, only five reported an increase in foreign orders, of which four - Germany, Spain, Turkey and Ireland - reported material improvements. Only a marginal gain was seen in Poland. Of the five, Ireland reported the strongest increase in export sales, seeing the strongest rise for two-and-a-half years, but Germany notably reported its best sales performance since April 2018.

The clustering of export growth among euro member states meant the eurozone nations as a whole represented the only major economy to record export growth in July, with export orders rising at fastest rate for almost two years (importantly, note that this includes intra-euro area trade, potentially highlighting an advantage exporting within the free-trade and single-currency area).

The US was the next-best performing economy in terms of goods exports, albeit with orders falling marginally. Export losses in Austria, Italy, Taiwan, Russia, China, Canada and the UK meanwhile eased further from the pandemic highs to register below-global average declines in July. 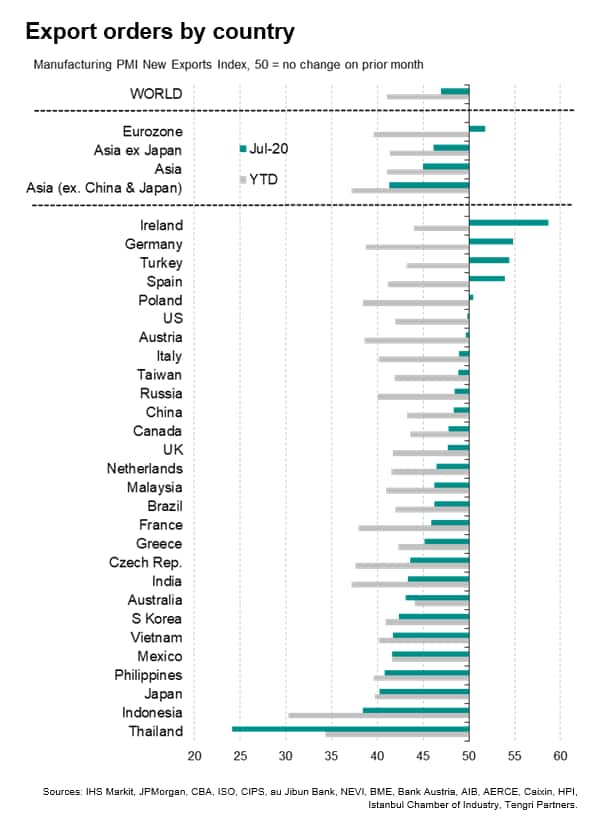 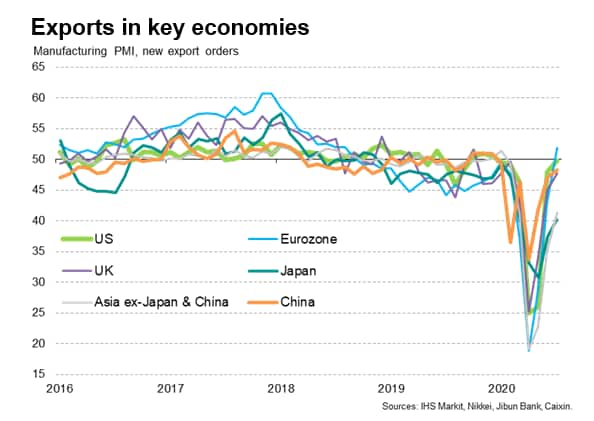 At the other end of the scale, the steepest falls in export orders in July were seen in Thailand, Indonesia, Japan and the Philippines. In fact, eight of the nine worst-performing export nations in July were located in the Asia Pacific, revealing a worrying degree of sustained trade weakness in the region.

Looking over the first seven months of the year so far, all countries surveys have suffered steep falls in goods export orders, according to the average PMI readings. Indonesia has reported the sharpest decline, followed by Thailand and India. The mildest decline has been so far seen in Australia, followed by Ireland, Canada and China. 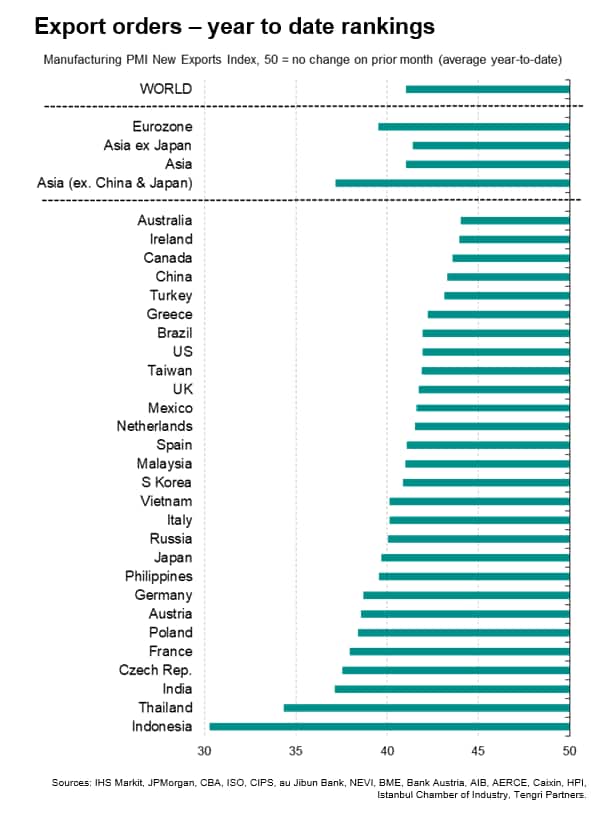