Examining the relationship between PMI data and changes in GDP

IHS Markit's PMI survey diffusion indices are designed to capture business cycle developments. They do this by replicating the industrial make-up of an economy and subsequently tend to achieve high correlations with other yardsticks of economic activity, most notably gross domestic product (GDP) figures.

Moreover, given the timeliness of PMI data, which are usually released well ahead of equivalent GDP statistics, there is a natural tendency to map the two series together and generate real-time estimates of current GDP growth (often referred to as 'nowcasting' as discussed here).

As PMIs are diffusion indices, and are bounded between 0 and 100, with 50.0 representing a no-change or neutral point, then the link between PMI and GDP growth will usually be estimated via linear regression.

Intuitively, PMI readings of 50.0 over a calendar quarter should approximately equate to a similar result for GDP (i.e. economic stagnation). However, this is not always the case: indeed, we - and many PMI users - have observed a variance between countries as to what PMI = 50.0 (and other readings) usually equate to in terms of GDP growth.

This note aims to provide more clarity around what the 50.0 no-change mark means in terms of GDP growth from the perspective of a nation's level of economic development.

Broadly speaking, our research finds that, while an average figure of 50.0 often implies broadly flat GDP in so-called developed economies (particularly in Western Europe), this is not the case for faster growing emerging markets where PMI readings close to 50.0 are often associated with strongly positive GDP growth outturns.

Indeed, we find there exists an inverse relationship between the level of development and implied PMI GDP growth rates at the 50.0 no-change level.

Across our global PMI dataset, readings of 50.0 imply different GDP growth rates in different nations. Typically, a PMI reading of 50.0 in more developed economies maps to a GDP growth rate of around 0%, whereas the same reading in emerging markets often points to positive GDP growth. 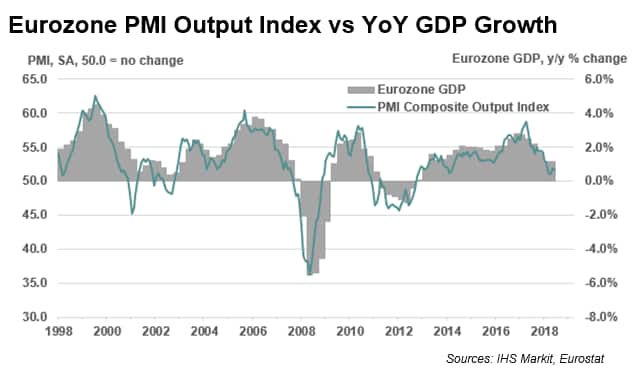 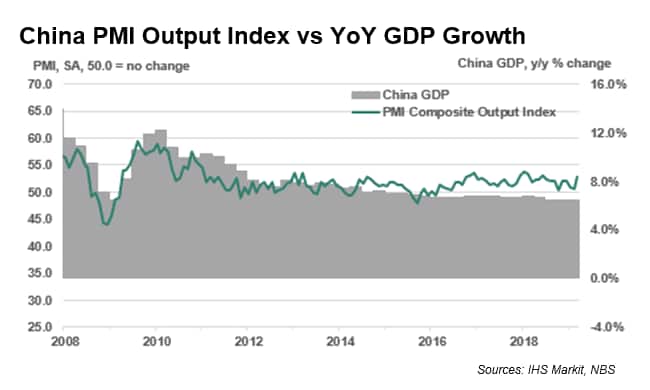 This paper looks at these relationships more closely on a country-by-country basis, with the aim to more formally establish a broad relationship between the PMI's implied GDP growth and a barometer of a country's level of economic development.

The PMI surveys ask respondents to provide answers to several questions covering areas such as output, new orders, employment, inventories and prices. From the list of PMI indices available, we feel that two are intuitively the most suitable for tracking changes in GDP, namely the headline PMI* and the Output Index.

Subsequently, for each country where whole economy or composite (covering manufacturing and services) PMI data are available, we ran separate OLS regressions, with quarterly averages of the headline PMI or Output Index as an explanatory variable against year-on-year GDP growth as a dependent variable.

With the relationships between PMI data and GDP established, the independent variable was set to 50.0 and the implied GDP growth rate was subsequently estimated. The results of this exercise are shown in the chart below. 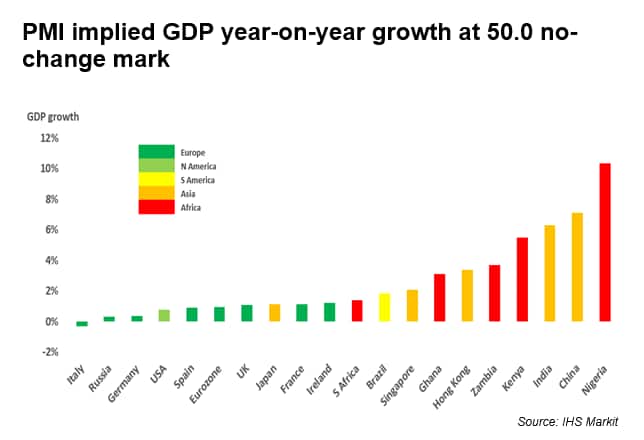 As anticipated a reading of 50.0 generally points to zero or minimal GDP growth in most European countries, while in African and developing Asian economies, 50.0 often signals a noticeable level of positive GDP growth.

Using the implied country growth rates developed in the previous section, we have formalised the relationship between the PMI 50.0 no-change mark and a country's "neutral" GDP growth rate.

The relationship was developed in the context of a country's level of economic development, which we measured via two variables: United Nations Human Development Index (HDI) and government spending as a percentage of GDP (as estimated by the World Bank).

Subsequently, we ran an OLS regression with the implied "50.0 = no-change" annual GDP growth rates as the dependent variable against two explanatory variables: HDI and government spending.

The results of the regression, charted below, show that the two independent variables were both significant at the 1% level, whilst explanatory power was also strong, with the regression yielding a R-squared statistic of 0.71. 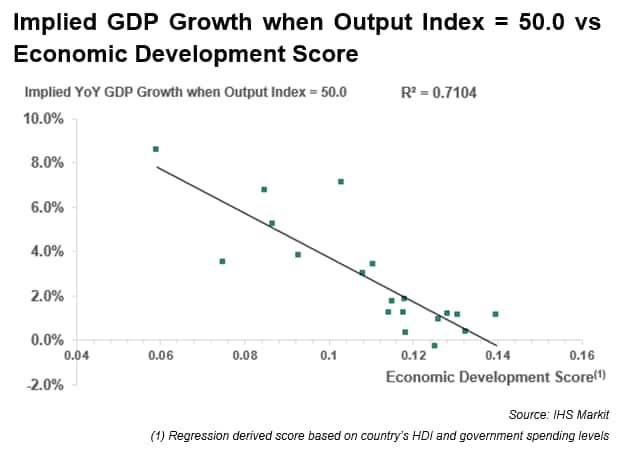 The observed relationship between economic development and implied GDP growth rates when a country's PMI is at a level of 50.0 helps us understand the performance of a country's economy in two ways.

Firstly, the country-by-country relationships between PMI data and GDP may be used to provide robust implications for GDP growth when PMI figures are released each month.

Secondly, with our "rule-of-thumb" relationship between HDI, government spending and the implied GDP growth value when PMI data are around the 50.0 no-change mark, we can estimate an expected GDP growth rate for surveys where insufficient data exists (such as newly established PMI surveys with short histories and/or or nations with incomplete or low-frequency GDP figures).

For example, our work has already proven useful in estimating implied GDP growth rates in some Middle Eastern countries, where non-oil GDP data are available only annually and PMI history is short (see appendix below). 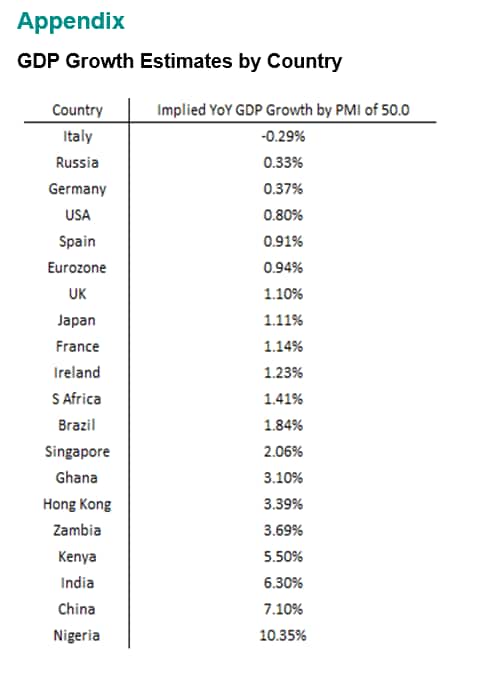 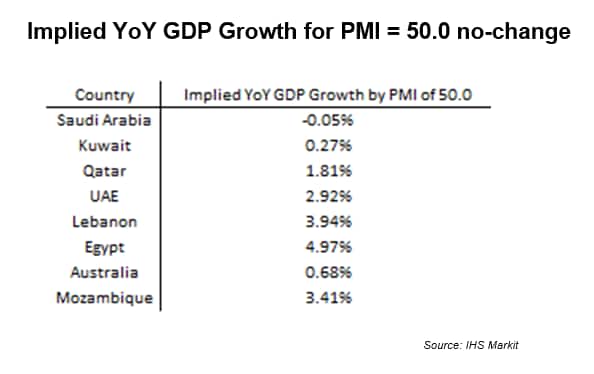