As huge quantities of electric vehicle (EV) chargers and energy storage are installed worldwide in the coming years, there is the possibility for both technologies to be deployed together.
According to an IHS Markit report, energy storage has the potential to solve two big problems faced by EV charge point developers:

Because of these problems, deploying EV infrastructure is seen as a necessary evil required to support the wider goal of higher EV uptake. Reluctant investments by automotive OEMs have been bolstered with public funds to enable development of a network that will not be used fully for numerous years. However, it doesn't have to be this way. As the business case for energy storage improves, it can provide a quicker route to profitability for EV infrastructure providers.

Mitigating high grid costs
It seems intuitive to view energy storage as a way to reduce peak energy demand at EV chargers. By charging the energy store from the grid when demand for charging is low, developers could supplement the power supply at high-charging demand times, leading to a lower peak in power demand from the grid.

Why hasn't this use case been widely adopted?
First, charge point developers point out that in most cases batteries are still too expensive for this niche role. Second, charge point developers view a grid connection that will meet peak EV demand as the gold standard - whereas batteries come with concerns over degradation and maintenance requirements.

Missing from this analysis is the difference location can make to the cost of connecting to the grid and the potential revenue for charge point development. Grid charges are often highest at the locations where EV charging is most needed. Demand charges in urban areas of New York can reach $25/kW/year, and connections at service stations on trunk roads in the United Kingdom can be up to £1,000,000 for a rapid charger station. Demand for EV infrastructure will be highest at these urban and trunk road locations. Therefore, EV charge point developers are commonly faced with a no-win choice: install EV chargers at locations with lower grid demand and accept less revenue due to a non-optimal location or chase the best locations but accept unprofitable development due to high grid-related costs.

By peak shaving demand, energy storage can enable charge point operators to minimize grid costs at prime locations. In a few niche locations, the increase in revenue achieved by installing where demand is highest will be enough to cover the cost of the battery. However, the widespread opportunity for charge point developers to use storage lies in the way it can cut grid costs while also enhancing revenues.

Increasing revenues
The number of EVs is still low, at less than 5% of the total vehicle f leet in most countries. Therefore, the charging infrastructure typically has subpar utilization rates, threatening the profitability of charge point developers.

Meanwhile, the case for energy storage has grown substantially in recent years, with investment being driven across the globe by profitable use cases. Battery energy storage projects are accessing revenue streams by bidding into existing frequency response markets, providing other ancillary services, or increasingly trading wholesale
energy as price volatility increases.

Commonly quoted returns for energy storage projects are as high as 12% to 15% in the United Kingdom, United States and Australia, surpassing those of charge point developments. This means there is an emerging opportunity for charge point developers to incorporate energy storage alongside EV chargers. This can generate additional revenues by providing grid services prior to EV adoption and increasing demand for EV charging - thereby de-risking the overall investment case.

Bringing it together over the life of the project
To maximize benefits, charge point developers should include energy storage at EV chargers - using the battery to generate additional revenues by providing grid services as well as reducing costs by peak shaving. To fully achieve this goal, the use case of the energy storage system must change over the lifetime of the project.

In the early years, the battery will provide much of the project's revenues via ancillary services. Then, as EV adoption increases, project revenues will shift toward electricity sales to vehicles. The battery use case will shift to peak shaving in order to minimize grid charges. In this way, charge point developers can generate diversified revenues throughout the lifetime of the project while reducing risks.

A small number of companies are considering deploying batteries to do just this in the United Kingdom. However, the market for energy storage to provide ancillary services and wholesale arbitrage is becoming more established across Europe and the United States and, at the same time, the rollout of EV chargers is accelerating. IHS Markit expects this trend will lead to growing synergies between energy storage and EV chargers. Using the flexibility of energy storage to both reduce grid-associated charges and provide additional revenue, this approach can help address both of the big problems faced by charge point developers. 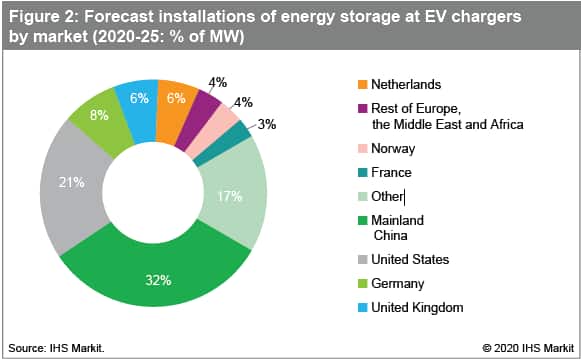 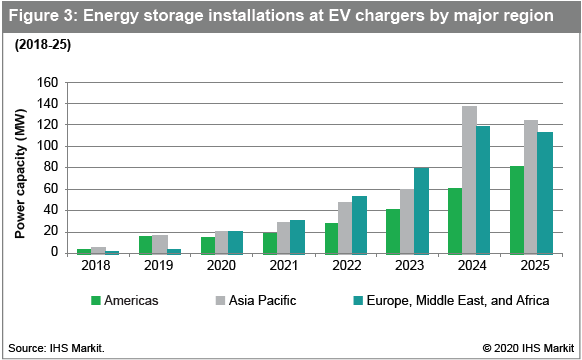 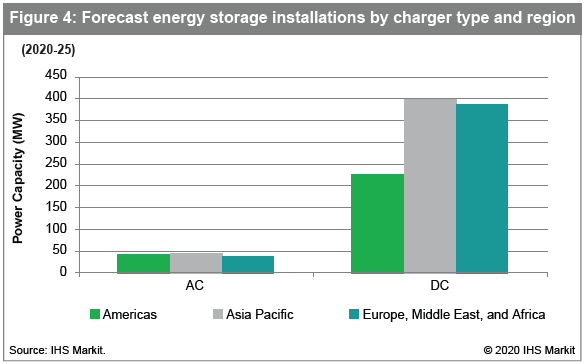