Business activity stalled across the eurozone in September, albeit with increasingly divergent trends by sector and country. Faster growth of manufacturing, led by Germany, was offset by a renewed downturn in the service sector, which was often linked to resurgent coronavirus disease 2019 (COVID-19) infection rates.

A net loss of jobs continued to be reported, though the rate of payroll reduction eased, notably in manufacturing, thanks in part to improved future expectations. Price pressures meanwhile moderated during the month.

The flash IHS Markit Eurozone Composite PMI® fell for a second successive month in September, dropping from 51.9 in August to 50.1, indicating only a very marginal increase in business activity. Having rebounded sharply in July and, to a lesser extent, August from COVID-19 lockdowns during the second quarter, the PMI has since indicated a near stalling of the economy at the end of the third quarter as rising infection rates and ongoing social distancing measures curbed demand, notably for consumer-facing services.

Manufacturing output growth accelerated in September to the fastest since February 2018, fueled by the largest rise in new orders seen over this period. But the service sector, having already almost stalled back in August, recorded the largest contraction of output since May, albeit with the rate of decline running far weaker than seen during the height of the pandemic. 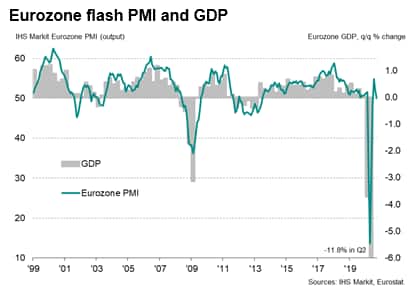 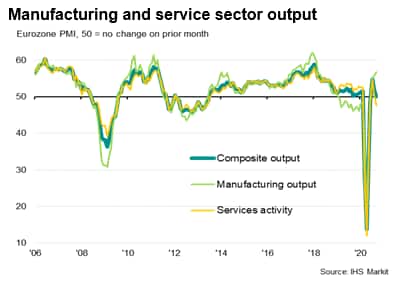 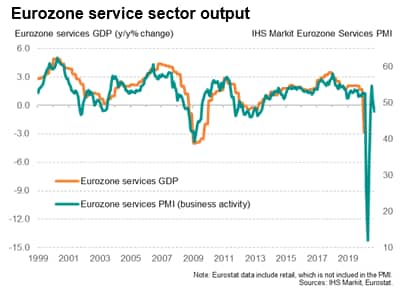 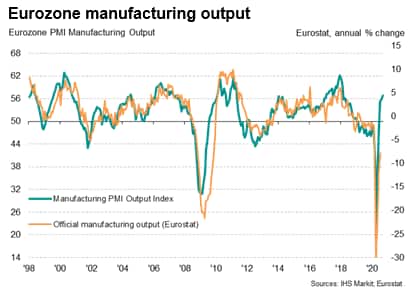 Germany continued to lead the recovery, though even here a strong surge in manufacturing output, which grew at the fastest rate since January 2018, was countered by a decline in services activity for the first time since June to cause the rate of expansion to slow for a second month running.

Elsewhere, business activity fell for a second successive month after July's brief return to growth, with the pace of decline accelerating as an increased rate of contraction in services was accompanied by slower manufacturing output growth. 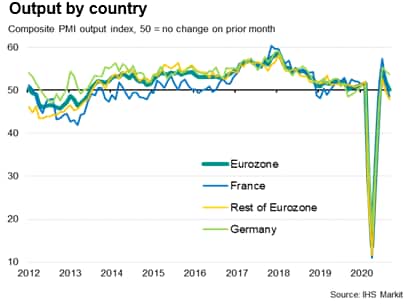 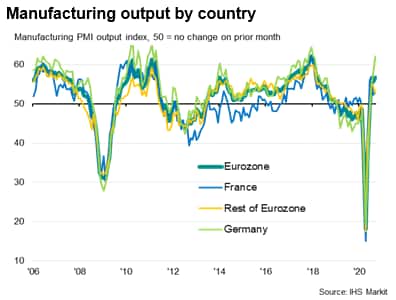 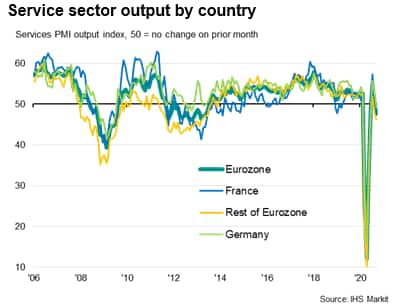 Job losses remain higher than at any time since 2013

Employment was meanwhile cut for a seventh successive month. Although the rate of job losses moderated further from April's record peak, the pace remained higher than at any time since June 2013 prior to the pandemic. An easing in manufacturing job cutting to the lowest since February contrasted with a slight increase in the rate of job losses in services, reflecting the divergent business activity trends between the two sectors. Reduced staff cuts in Germany and France were partly countered by greater job losses in the rest of the region.

Backlogs of work fell at a slightly reduced rate, showing encouragingly robust growth in manufacturing but falling at an increased rate in services due to the latter's drop in inflows of new business. While the build-up of uncompleted work in manufacturing hints at growing capacity pressures in the factory sector, the service sector data point to the development of excess capacity. 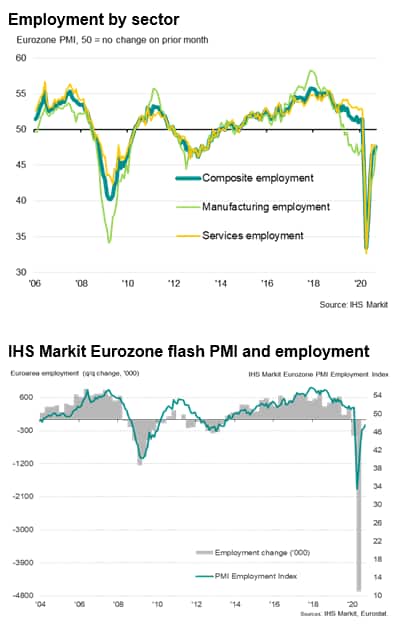 Average prices charged for goods and services meanwhile fell at the steepest rate since June, down on average for a seventh month running as firms increasingly reported the need to offer discounts to stimulate sales.

The drop in charges occurred despite costs rising again. Average input prices increased for a fourth consecutive month in September, albeit only modestly and at a slightly reduced rate compared to August. Falling manufacturing input prices, often linked to the appreciation of the euro, were offset by a further rise in services costs, in turn often blamed on higher virus protection costs.

The combination of falling selling prices and rising costs indicated the greatest squeeze on companies' margins since December 2018. 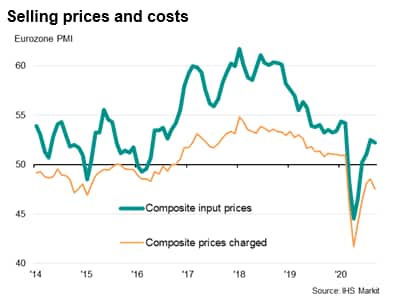 Covid-19 and the outlook

Looking ahead, business expectations about the coming 12 months hit the highest since February, improving in both manufacturing and services and across Germany, France and the rest of the euro area as a whole. But this optimism often rests on infection rates falling, which remains far from guaranteed for the coming months.

The main concern at present is therefore whether the weakness of the September data will intensify into the fourth quarter, and result in a slide back into recession after a frustratingly brief rebound in the third quarter. 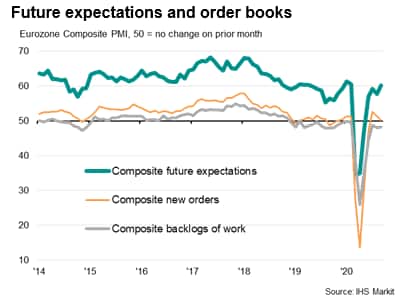 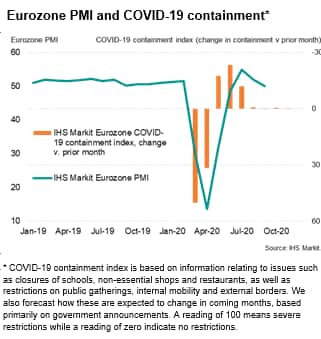