Based on data up to early December, the Q4 2018 Eurozone GDP nowcast points to economic expansion of 0.3% q/q, a level slightly below the post- financial crisis trend rate (0.36%). However, given the prior distortion to growth from the auto sector emissions-related drag on German output, IHS Markit currently anticipates the economy will grow by 0.4% q/q. 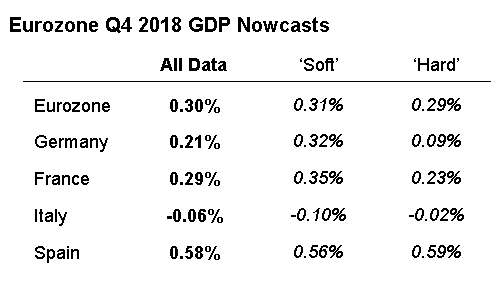 Survey data continue to soften heading into year end. The Eurozone Composite PMI dropped in November to its lowest level for over two years, dragged down by worries over global trade trends and political worries around Brexit. Business confidence was at its lowest in nearly four years, whilst separate figures show consumer confidence at a 20-month low. Although our EZ Economy Tracker (which uses principal components analysis (PCA) to estimate a single 'factor' index from the 36 variables used to nowcast EZ economic output) improved slightly in November, it remains close to October's 26-month low. 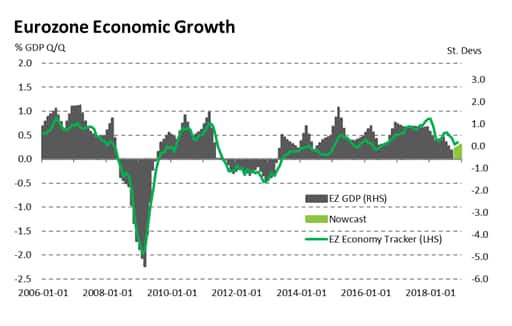 Whilst survey data continue to show a slowdown in underlying growth, we are keen to see official data updates for the start of Q4 (especially industrial production) to assess whether the weakness related to autos production that impacted on Q3 data proves to be transitory.

Indeed, when observing similar-sized model 'surprises' to the one seen in the third quarter, growth in the following three-month period has tended to overshoot the respective nowcast. 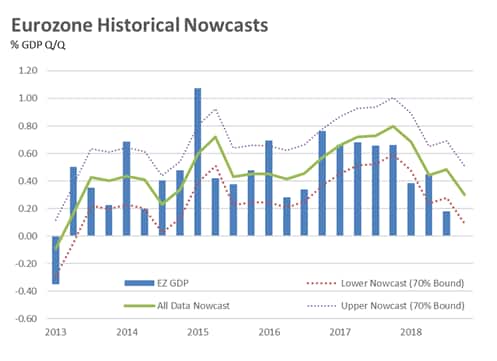 And with German car production figures for October showing strong year-on-year expansion, GDP growth may well be firmer than is currently being implied by the current nowcast.

However, based on survey data and anecdotal evidence from PMI panellist respondents, the potential for a strong rebound in the autos sector is unconvincing. If anything, the underlying growth trajectory for the industry remains downward: German manufacturers reported a near stagnation of output in November, the sharpest reduction in total new orders for four years and a fall in exports not seen since mid-2013. Moreover, Czech goods producers, who are sensitive to developments in the autos sector, again commented on major disruption, with optimism about the future falling to its lowest level for six years. Panellists also signalled an increasing likelihood of (previously unexpected) plant shutdowns of major manufacturer car plants in January.

All of this adds to the uncertainty around the Q4 growth nowcast for Germany. Whilst currently at 0.2% q/q, IHS Markit estimates that the autos drag on Germany was around -0.3 ppts on GDP in Q3 leading to considerable upside risk to the current estimate. Factory orders and industrial production figures out later in the week will therefore be crucial in better understanding the potential outcome here (and given the size of the German economy, at the wider Eurozone level).

Elsewhere, Italian economic output is on course to contract by -0.1% in the fourth quarter. That would push the country into technical recession. Weakness remains most concentrated in the manufacturing economy, where operating conditions are deteriorating to the greatest degree for just under four years. Political uncertainty is exacerbating underlying demand weakness, according to PMI panellists.

By comparison, PMI data in France and Spain are holding up relatively well, with the implied rates of expansion for 'soft' data little changed from Q3's respective official estimates (0.4% and 0.6% respectively).