Despite moderating to the weakest in the year-to-date, the downturn in labour market efficiency across the eurozone was stretched to 12 months. March data indicated that manufacturing remained the main drag on productivity, falling at the steepest rate for a decade. Labour market performance in the service economy was unchanged, following three successive months of mild deterioration. Across Germany, Italy and France, growth was only registered in the service sectors of the former two nations.

Registering 49.0 in March, the seasonally adjusted Eurozone Productivity PMI® - derived from IHS Markit's national manufacturing and services PMI survey data - signalled deterioration for the twelfth month running. However, rising from 48.6 in February, the latest reading pointed to the slowest worsening in labour performance in 2019 so far. Weaker contractions were noted in Germany and France, with Italy posting a mild acceleration. 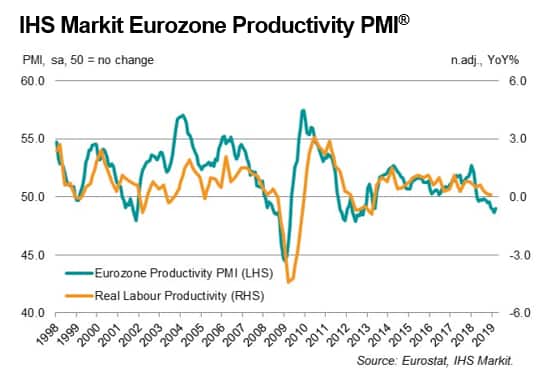 The efficiency of the eurozone manufacturing workforce deteriorated sharply and to the greatest extent in a decade. The fall remained widespread across France, Germany and Italy. In Italy, the downturn noted in March was the steepest since December 2011.

France saw a softer contraction in manufacturing productivity, the slowest since last November, and one that was the weakest of the three monitored countries. A softer upturn in jobs at the end of the first quarter was matched by a renewed decline in production.

Germany's goods producing industry was the weakest link. Here, productivity fell at the quickest pace since February 2009. Both output and employment contracted in March, the former much more sharply.

Labour performance across the eurozone service sector stabilised in March, ending a three-month period of reduction. A solid fall in productivity across France was offset by growth in Germany and Italy.

German services companies registered a slight improvement in workforce efficiency, one that was the most pronounced in over one year. There were marked expansions in business activity and jobs during March.

The upturn in service-sector productivity across Italy was also slight, but growth hit an eight-month high. A marginal uptick in headcounts translated into the fastest rise in business activity since last September.

The latest figures rounded off a challenging quarter for labour productivity. Across the eurozone private sector, the average contraction during Q1 2019 was the worst seen since Q3 2012. In Germany and France, the declines were the fastest since Q4 2011 and Q2 2013 respectively. The three-month average for Italy matched that noted in the prior quarter.