Eurozone business activity grew at the fastest rate for 15 years in June as the economy re-opened further from virus-fighting restrictions and vaccine progress boosted confidence. Prices charged for goods and services rose at an unprecedented rate, however, as demand continued to outstrip supply.

Despite firms taking on extra staff at the sharpest rate for almost three years, June saw a record rise in backlogs of work, a further near-record lengthening of supply chains and the increasingly widespread depletion of warehouse inventories.

The eurozone economy is booming at a pace not seen for 15 years as businesses report surging demand. The headline IHS Markit Eurozone Composite PMI® increased from 57.1 in May to 59.2 in June, its highest since June 2006, according to the preliminary 'flash' reading*. The latest reading indicated a fourth successive month of accelerating output growth as the economy continued to open up from COVID-19 related restrictions.

A further improvement in demand was also recorded, as new orders growth likewise accelerated to the fastest since June 2006.

The data therefore set the scene for an impressive expansion of GDP in the second quarter to be followed by even stronger growth in the third quarter. 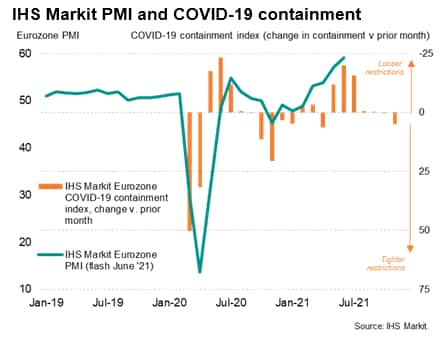 The output index has an historically close relationship with quarterly eurozone GDP growth, albeit with the survey understating the collapse and rebound in GDP during the pandemic. This may reflect the fact that the PMI does not cover retail and government sectors which were especially badly affected by the pandemic, but also to some extent likely reflects the fact that the survey only captures information on whether business output rose, remained unchanged or fell compared to the prior month. Firms can only therefore report that production fell compared to the prior month, not that production was completely halted. In normal trading times, such large swings in production are unusual, and often cancel each other out if sample sizes are sufficiently large, meaning the PMI usually tracks output closely.

As our chart shows, in usual conditions, the PMI acts as a more reliable indicator of GDP than official first estimates of GDP (see also A PMI-Based Real GDP Tracker for the Euro Area). 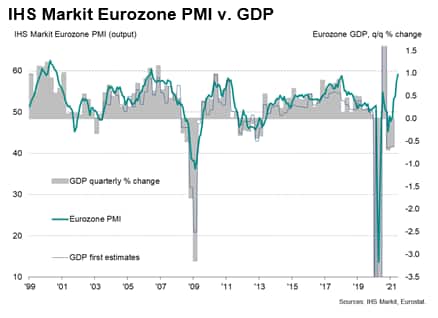 As business conditions return to normal in 2021, the relationship of the PMI with GDP will therefore likely be fully re-established. It is therefore also important to note that the current PMI readings may likewise understate the Q2 2021 GDP rebound, but the key message from the surveys is that the economy is once again growing strongly, and that the upturn is becoming increasingly broad-based, spreading from manufacturing to encompass more service sectors, especially consumer-facing firms.

Although manufacturing continued to lead the upturn, reporting a twelfth successive month of output growth with the rate of expansion picking up again, it was the service sector that again reported the biggest improvement in performance, with business activity growth accelerating to a pace not exceeded since July 2007. 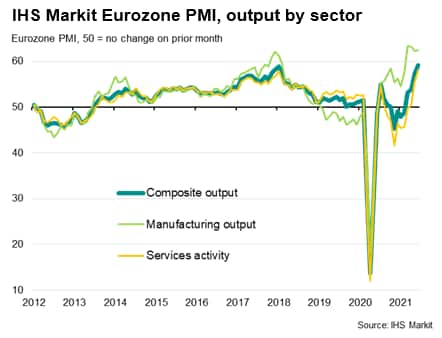 Vaccination programmes are also making impressive progress. This has not only facilitated greater activity in the service sector in particular, but the brightening prospect of life increasingly returning to normal has also pushed confidence to an all-time high, fuelled greater spending and encouraged hiring.

However, the strength of the upturn - both within Europe and globally - means firms are struggling to meet demand, suffering shortages of both raw materials and staff. Under these conditions, firms' pricing power will continue to build, inevitably putting further upward pressure on inflation in the coming months.

Despite a rise in employment during the month, with job gains in both manufacturing and services hitting the highest since 2018, firms reported the largest accumulation of backlogs of work since data were first available in 2002.

Rising backlogs of work were accompanied by widespread supply shortages for many inputs. Manufacturers reported a lengthening of supply chains that was only slightly less marked than the 24-year survey record seen in May. Producers' inventories of finished goods stock meanwhile fell at the sharpest rate since 2009 as high sales depleted warehouses. 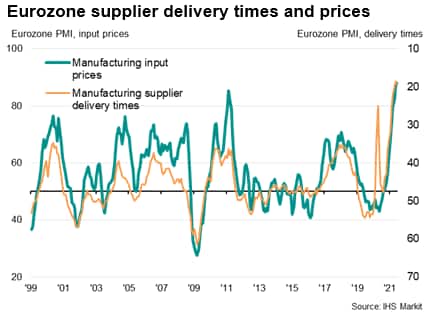 Average input prices rose in June at a rate exceeded only once (in September 2000) over the 23-year survey history. A record increase in manufacturers' material prices was accompanied by the steepest increase in service sector costs since July 2008, the latter reflecting widespread reports of higher supplier prices, increased fuel and transport costs plus rising wage pressures. 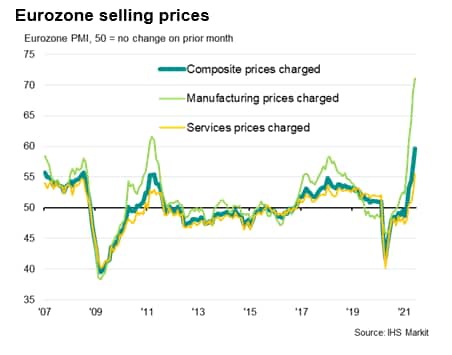 Average prices charged for goods and services meanwhile rose at by far the fastest pace since comparable data for both sectors were first available in 2002, with prices rising in each sector at rates not exceeded for approximately two decades. 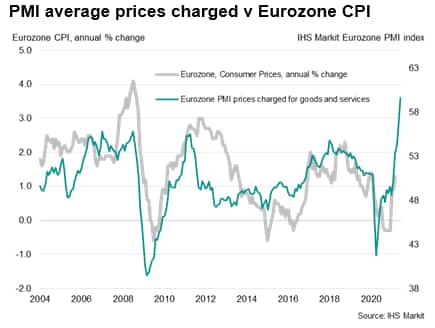