September's PMI survey data showed the pace of growth slowing to one of the weakest seen over the past two years amid especially weak performances in Spain and Italy. Manufacturing led the slowdown, with export orders close to stalling. However, the survey data still indicate a robust third quarter overall and suggest prior GDP data could be revised higher.

The IHS Markit Eurozone Composite PMI® fell to 54.1 in September, slightly below the flash reading and sounding a soft note for growth at the end of the third quarter. The expansion was the joint-weakest seen over the past 22 months. The third quarter average of 54.3 is the lowest recorded since the closing quarter of 2016. Despite the recent weaker readings, the PMI encouragingly remains at a relatively elevated level, and comparisons with official data indicate that the third quarter average is equivalent to GDP rising by almost 0.5%*. 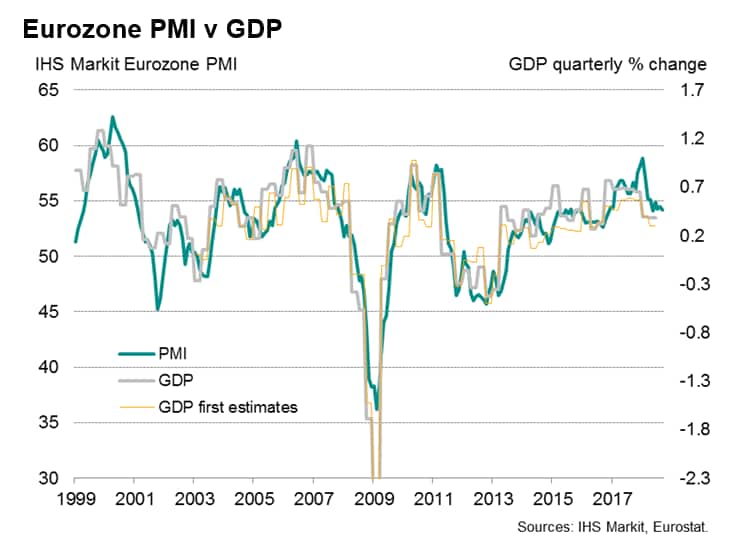 The recent PMI readings therefore indicate a rate of growth commensurate with the latest official estimates of GDP in the first two quarters of the year. Note though that the PMI data indicate that we can expect these official growth estimates in the first half of the year to eventually be revised higher.

Indeed, upward revisions to GDP are more common at times of strong growth as indicated by the PMI in the early months of 2018 for example. Using a regression-based model based on the PMI and its quarterly change helps to explain GDP revisions, with the model allowing us to postulate that the official flash estimate for third quarter GDP will be close to 0.4% but subsequently revised up by a tenth of a percentage point. 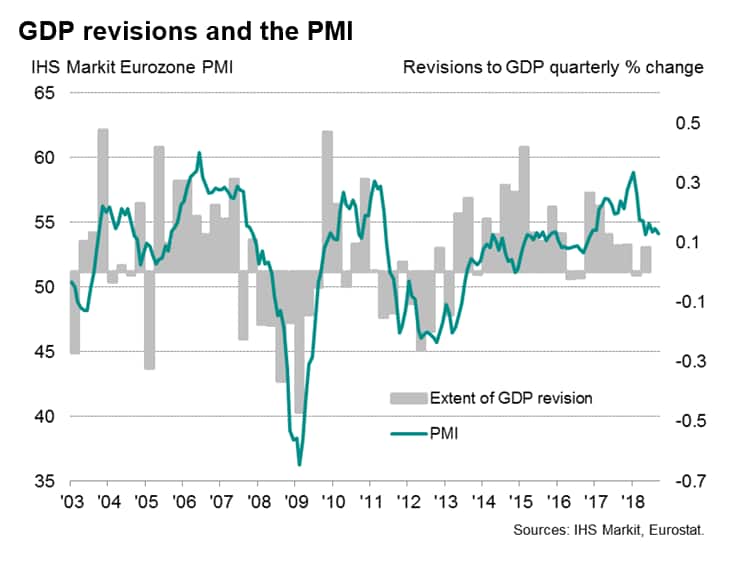 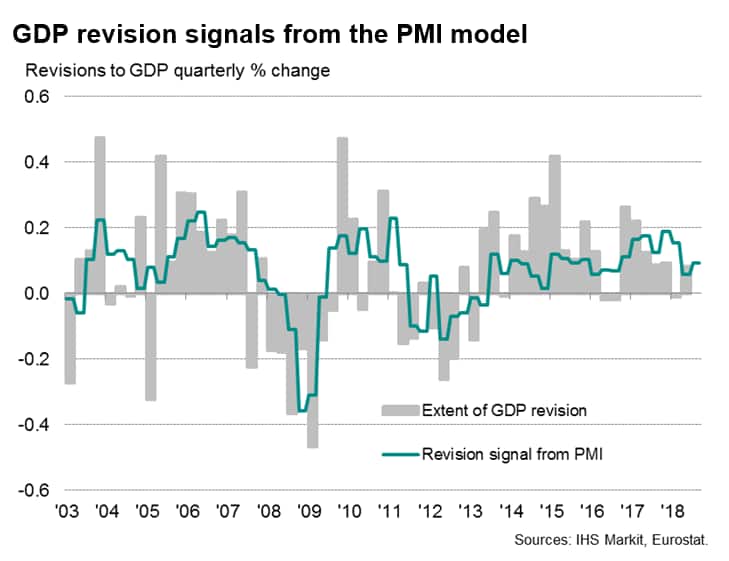 September saw mixed sectoral trends, with the slowdown at the composite level led by a deterioration in manufacturing output growth to its lowest since May 2016. This is in turn was linked to the worst export performance seen since exports began rising in mid-2013. The latest gain (which includes intra-eurozone trade) was marginal, suggesting trade flows have stalled, which represents a marked contrast to the record rate of export growth seen at the end of last year. 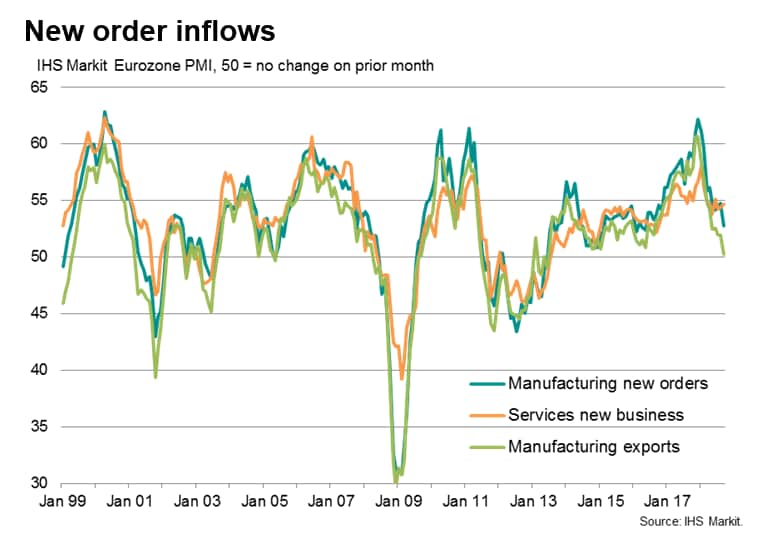 In contrast, service sector growth picked up pace slightly to hit a three-month high amid resilient inflows of new business (growth was unchanged on August), though remained well below highs seen at the turn of the year.

Forward-looking views also differed by sector, with optimism about the year ahead dropping to the lowest for nearly three years in manufacturing but rising slightly in services (albeit from August's 25-month low).

Moreover, other indicators point to weakness in the coming months. The overall gain in new orders was one of the smallest seen in the past two years, causing backlogs of work to rise at the slowest rate for two years. Growth of input buying in manufacturing meanwhile hit a two-year low as companies focused on inventory reduction.

Jobs growth also cooled slightly, notably in manufacturing, but remained encouragingly robust and just above the average seen in the year to date.

The degree to which job gains will persist remains in doubt. Indeed, business activity growth has exceeded new order inflows in recent months such that backlogs of work are rising at a rate which is historically commensurate with considerably lower jobs growth than presently recorded. Hiring will therefore likely slow unless demand revives. 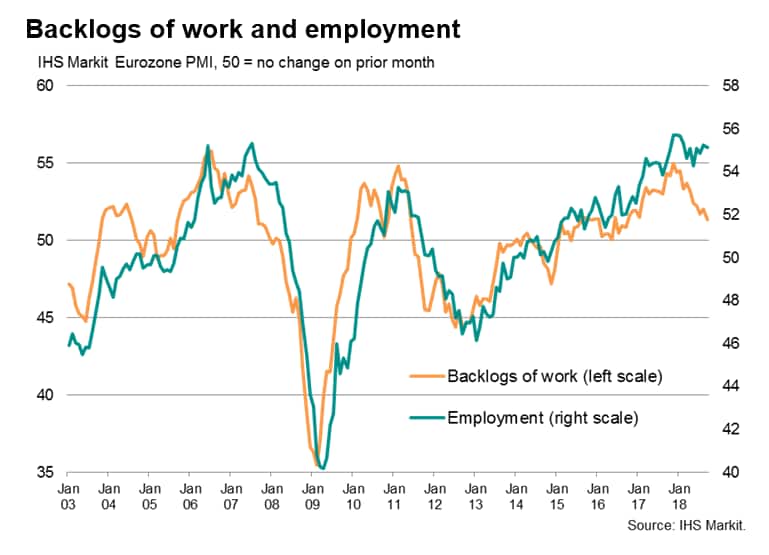 Growth is looking increasingly unbalanced. While Germany and, to a lesser extent, France retained relatively robust rates of expansion in September, growth slowed in both cases. That said, Germany still recorded a stronger third quarter compared to the prior three months. France's third quarter was the weakest since the closing quarter of 2016.

Meanwhile, underlying growth rates in Italy and Spain have weakened markedly in recent months recording the slowest quarter of growth since the fourth quarters of 2016 and 2013 respectively. 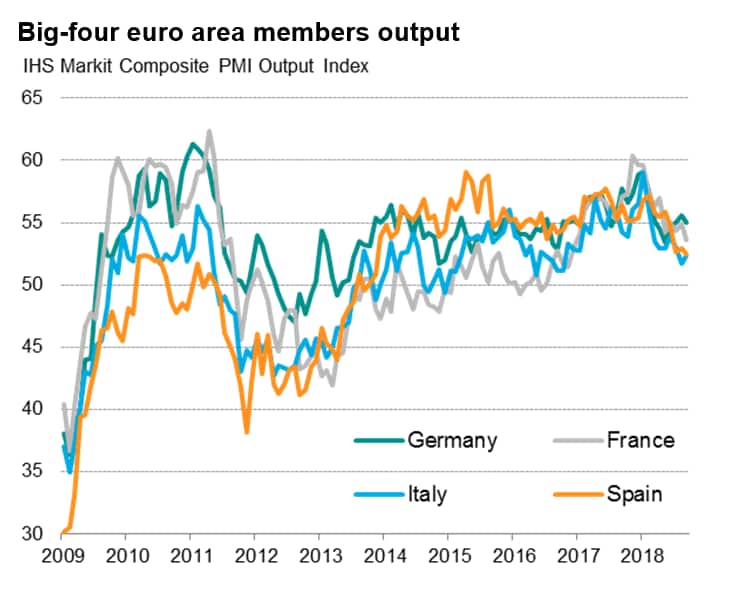 The slowdown signalled by the PMI makes for slightly uncomfortable reading for policymakers. Having hiked interest rates in 2008 and 2011 on the back of rising price pressures, only to find more stimulus was soon needed to support growth, the ECB seems keen to not make the same mistake again. However, the strong start to 2018 has led to increasingly hawkish sounds to the effect that monthly asset purchases have been reduced from €30bn to €15bn for the final three months of 2018, with a view to new purchases being halted in 2019. While technically more of a reduction of stimulus rather than a tightening of policy, the survey data suggest the timing of the hawkish announcement looks far from optimal (see chart). Any further weakening of the composite PMI Output Index would put it into territory normally associated with a dovish rather than hawkish bias.

While the survey's price pressures gauge cooled in September, higher oil prices are likely to push costs up in coming months. However, in the absence of a pick-up in business activity, the ECB could be reluctant to tighten policy on rising price pressures alone if it wishes to avoid a possible repeat of previous errors. A rate rise still looks unlikely within the coming year, as per current ECB guidance, and could be pushed further out if the downside risks indicated by the PMI surveys materialise. 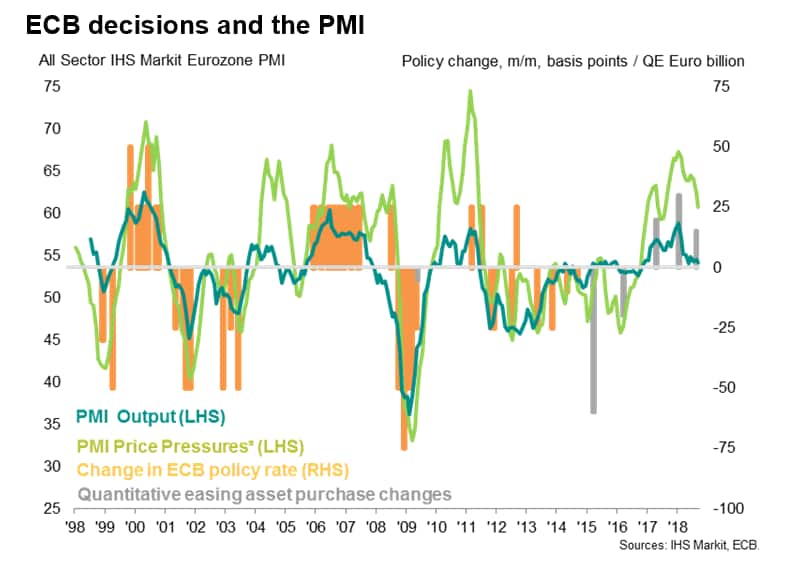