The eurozone economy remained stuck in its deepest downturn ever recorded in May due to ongoing measures taken to control the coronavirus disease 2019 (COVID-19) outbreak, according to provisional PMI® survey data. However, the rate of decline eased as parts of the economy started to emerge from lockdowns.

The flash IHS Markit Eurozone Composite PMI rose from an all-time low of 13.6 in April to 30.5 in May, its highest since February. By remaining well below the 50.0 no-change level, the PMI registered a third successive monthly fall in output and continued to indicate a rate of contraction in excess of anything seen prior to the COVID-19 outbreak. The prior low of 36.2 was seen during the peak of the global financial crisis in February 2009. 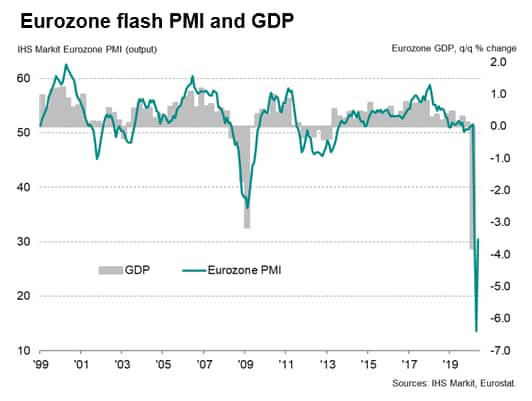 Our model, which compares the PMI with GDP but takes into account 'non-linearity' during times of extremely strong growth or decline, suggests that the May survey is indicative of the eurozone economy contracting at a quarterly rate of approximately 5%, but the actual GDP looks likely to be greater - in part due to the fact that the PMI excludes retail and the self-employed (two areas of the economy especially hard-hit by the pandemic), but also due to the fact that current nowcasting is more an exercise of estimating what proportion of the economy is still operating rather than calculating growth rates. We currently expect GDP to fall by just over 10% in the second quarter.

The pandemic was again by far the most commonly cited cause of falling output, resulting in widespread closures of non-essential businesses, disrupting supply chains and hitting demand for a wide variety of goods and services.

The rise in the PMI nevertheless indicated a markedly slower pace of contraction compared to April's record collapse. Rates of decline eased in manufacturing and services, reflecting both a reduction in the number of companies reporting lower activity and an increase in the number of firms reporting an improvement. 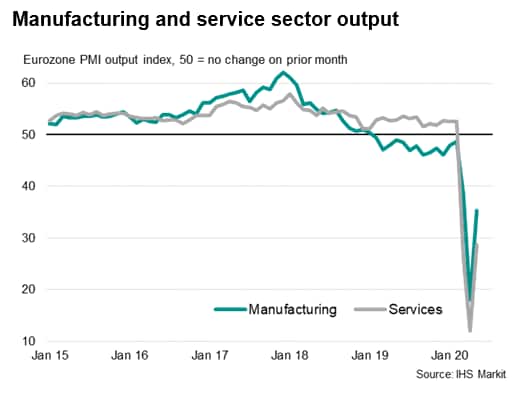 The service sector business activity index picked up from 12.0 in April to 28.7, its highest since February, but social distancing and other virus-related lockdown measures continued to hit businesses such as hotels, restaurants, travel and tourism and other consumer-facing firms especially hard, resulting in the third-steepest decline ever recorded.

The factory sector's output index1 meanwhile rose from 18.1 in April to 35.4 in May, albeit likewise still indicating a rapid rate of decline. 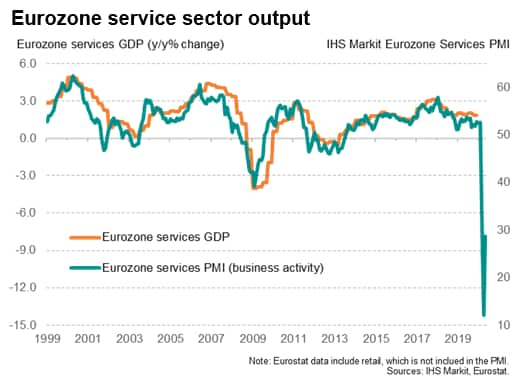 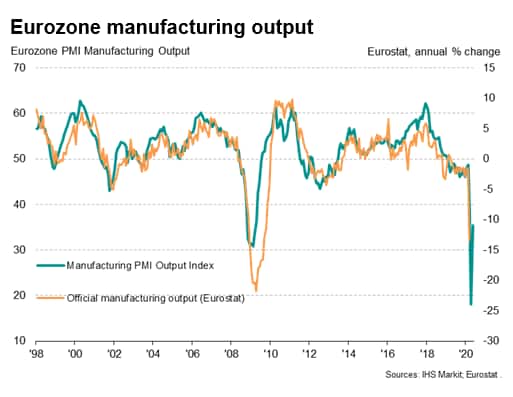 Looking by country, rates of output decline eased across France and Germany, as well as collectively across the rest of the region, from the unprecedented downturns seen in April, though in all cases remained fiercer than any time prior to the COVID-19 outbreak. Germany again saw a modestly milder downturn than France, while the rest of the eurozone saw the steepest decline.

Jobs meanwhile continued to be cut at a rate unprecedented prior to the COVID-19 lockdowns, the rate of staff cuts easing only modestly compared to April's record. Similar rates of job shedding were seen in services and manufacturing, as firms in both sectors sought to cut capacity in line with weaker demand.

Furlough schemes were often cited as having reduced the near-term need to reduce staffing numbers, but longer-term job retention depends on the speed at which order books will refill. Backlogs of work fell sharply again in May, registering the second-steepest deterioration on record. 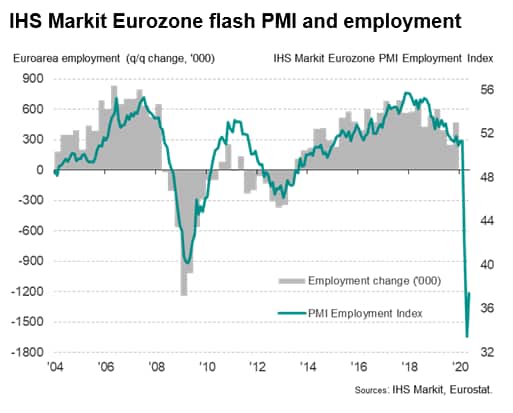 Forward-looking indicators improved, though merely from low bases. Overall inflows of new business fell to the third-greatest extent ever seen by the surveys as demand slumped further across both manufacturing and services, yet showed the smallest decline for three months to add to signs that the downturn has bottomed out.

Expectations of output in the coming 12 months meanwhile rose for a second successive month from March's all-time low, albeit with the number of pessimists continuing to exceed optimists and the overall level of sentiment remaining below anything recorded before the pandemic.

The rise in the PMI and its forward looking indicators adds to expectations that the downturn should continue to moderate as lockdown restrictions are further lifted heading into the summer. All eurozone countries eased their COVID-19 containment measures to some extent in May, helping to moderate the overall rate of economic decline. However, while a further loosening of restrictions is anticipated in coming months, some measures to contain the virus are likely to remain in place until an effective treatment or vaccine is found.

An additional concern is that demand is likely to remain extremely weak for a prolonged period, putting further pressure on companies to make more aggressive job cuts as government job retention schemes expire. We therefore expect GDP to slump by almost 9% in 2020 and for a full recovery to take several years. 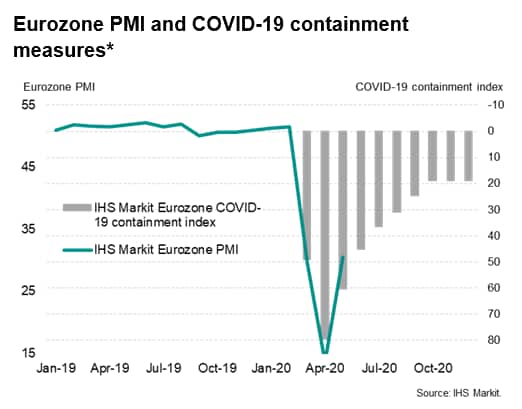 * COVID-19 containment index is based on information relating to issues such as closures of schools, non-essential shops and restaurants, as well as restrictions on public gatherings, internal mobility and external borders. We also forecast how these are expected to change in coming months, based primarily on government announcements. A reading of 100 means severe restrictions while a reading of zero indicate no restrictions.

1Note that we focus on the manufacturing output index rather than the composite manufacturing PMI as the latter includes measures such as suppliers' delivery times and inventories, which can distort the signal when analysing the survey data in terms of estimating pure production trends.