In this research paper, we showcase the power of the Purchasing Managers' Index® (PMI®) in tracking quarterly changes in Eurozone gross domestic product (GDP).

First, we outline the timeliness advantages of PMI data relative to other indicators, before going on to highlight the strong visual and statistical relationships that exist between Eurozone PMI and GDP data series.

Finally, in an empirical evaluation for the three largest eurozone member states and the region as a whole, we highlight how PMI indicators are able to consistently outperform other closely watched data series in nowcasting quarterly changes in GDP growth.

The ability to accurately predict changes in key economic indicators, such as GDP, is an essential component of the decision-making process for a wide number of groups. By building confidence in the likely direction of the economy, policymakers are able to optimise changes to key macroeconomic management levers such as interest rates or fiscal policy. Likewise, armed with sound knowledge of current macroeconomic performance, investors and businesses can make investment allocation decisions with greater clarity and certainty.

In recent years, increasing attention amongst practitioners has been to improve their understanding of economic performance in near 'real-time', rather than waiting for updates to slowly produced official figures such as GDP, numbers for which are also subject to notable future revision.

Performing such a forecasting task (often referred to as nowcasting) requires the use of high-frequency datasets that are released in a timely fashion. This up-to-date information can be exploited to predict, or nowcast, a slower released, low-frequency macroeconomic variable such as GDP.

The PMI series produced by IHS Markit in over 40 countries is such a high frequency and timely data source. Derived from a questionnaire sent to a fixed panel of carefully selected business executives across both manufacturing and service sector industries, the PMI datasets provide monthly information on a wide variety of metrics such as output, new orders, employment, prices and stocks.

Typically conducted in the middle of the month, results from the surveys are released on either the first day (manufacturing) or third working day (services and composite aggregations of both sectors) following the reference period.

However, for the eurozone (plus the US and Japan), PMI 'flash' data are also available around 10 days before the 'final' releases. These flash numbers are based on around 85%-90% of the final sample and the revisions between 'flash' and 'final' PMI data are typically. In the eurozone, detailed flash PMI figures for France and Germany are also provided.

Figure 1 shows how the PMI data fit into a typical timeline for nowcasting GDP growth in a given quarter (in this case Q2 2018).

To highlight the relative timing advantage of the PMI, the release formats of two closely watched indicators - the European Commission's Economic Sentiment Indicator (ESI) and official figures from Eurostat on industrial production - are also provided. 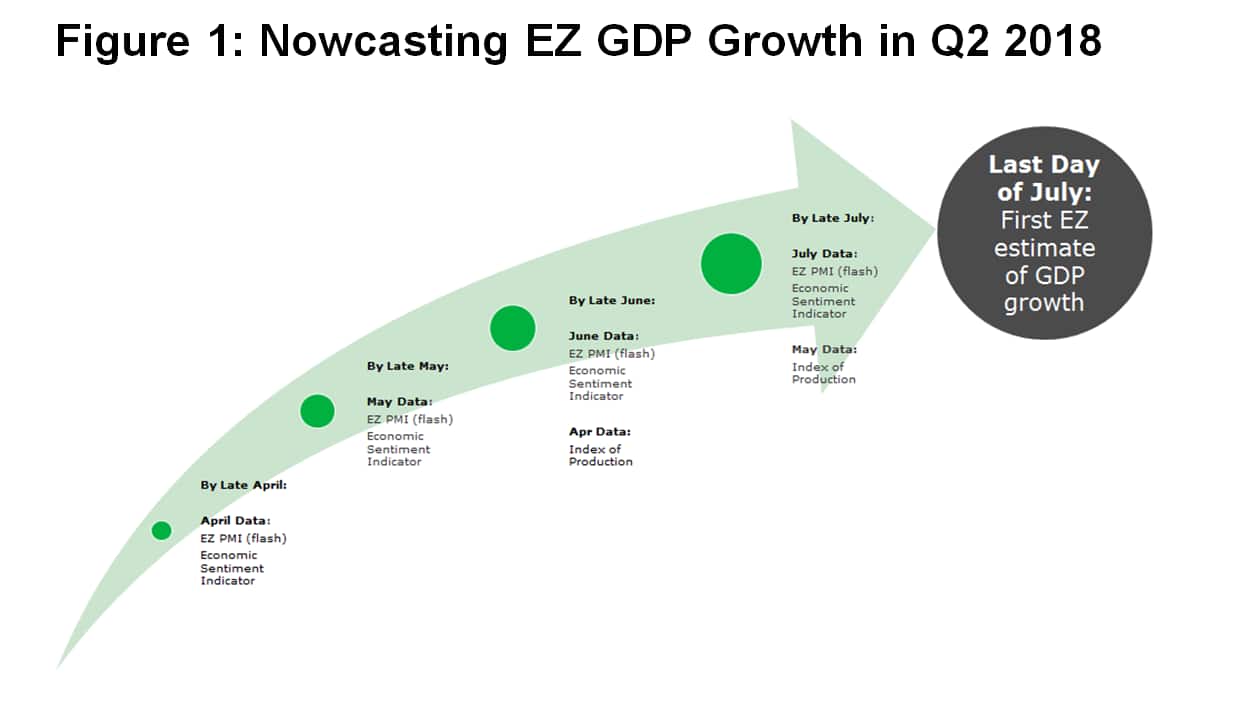 The timeline provides an indication of how data availability builds through a nowcasting cycle: during the first two months of a quarter, only survey (so-called 'soft') data are available - the PMIs and the ESI. It is not until mid-way through the final month of the quarter when official 'hard' figures (in this case industrial production) are available for the first month.

So, until a certain point, economists, investors and policymakers are reliant on 'soft' data to gauge economic performance.

Indeed, it is the non-synchronisation of releases and subsequent timing advantages that the PMI tends to enjoy that provides the foundation for its use, especially in areas such as monetary policy.

Being of a higher frequency and timelier nature than GDP statistics, PMI datasets are clearly a strong candidate to meet the demands of the continual tracking of economic growth.

These advantages become even more persuasive when observing the relationship between quarterly changes in GDP and the PMI. Figure 2 shows this for the eurozone. 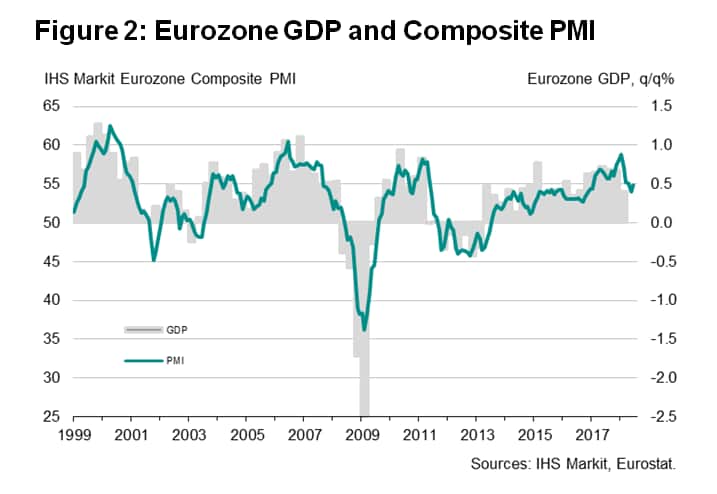 Since 2006, the Eurozone Composite PMI (which combines the manufacturing and service sectors) has correctly indicated underlying changes in growth through the financial crisis in 2008-2009, the eurozone debt-crisis intensification in 2011 and the 2017 upswing in economic performance.

Given the visual relationship between GDP and the PMI, it is not surprising to find that since the turn of the century the correlation statistic - a measure of directional co-movement where a positive reading close to 1 indicates that two series are moving closely together - is high at 0.87.

Moreover, this compares favourably to the European Commission's ESI series, which records a commendable, but notably lower, correlation of 0.76 with GDP.

In fact, the relationship between the PMI and GDP is comparable to the link between overall economic output and one of the most widely used official economic statistics in tracking quarterly growth - industrial production.

However, if we condition the performance of these indicators on timeliness, then the value added of the PMI strengthens further: in contrast to the quickly released PMI, industrial production data are typically not available until around 5-6 weeks after the reference period. Such a significant lag may well be considered as undesirable for those making high frequency policy and investment decisions.

Table 1 shows correlation statistics for the eurozone, and its three largest member states. The comparison period begins in January 2000, but to provide a sense of performance since the depths of the 2008-2009 global financial crisis, we also provide a sub-sample of results since January 2010.

Generally speaking, the PMI outperforms the ESI and is comparable to industrial production at the eurozone and country level. Naturally there are some exceptions, with industrial production data in Germany notably a strong performer, perhaps not surprising given the structure of Germany's economy.

These results also hold broadly true since January 2010, with the PMI performance for Italy especially eye-catching. France remains a laggard in terms of pure correlation statistics, although the PMI continues to perform better than the respective ESI and industrial production data series.

We now turn to the short-term predictive power of the PMI (as well as the ESI and industrial production) in forecasting quarterly changes in GDP via a simple nowcasting exercise.

To circumvent the issues of misaligned time frequencies (PMI data are released monthly and GDP quarterly) we base our nowcasting model on a simple AR-MIDAS style regression as per:

In this broadly standard forecasting set-up, current quarter GDP is predicted by using a lag of itself 〖GDP〗_(t-1) and a weighted average (ω_i) of an explanatory variable〖 X〗_(k,t). There are k= {1,…,m} observations of X seen over the time period t (in this instance k=3, which is the number of monthly observations of the explanatory variable recorded per calendar quarter).

The model is run as an out-of-sample nowcasting exercise for the period 2010Q1 to 2018Q1, with both the PMI and the ESI separately taking-up the position of the variable〖 X〗_(k,t).

To compare nowcasting performances, the root mean square forecasting errors (RMSFE) and the percentage of correctly predicted changes in GDP are provided. In the case of RMSFE, readings closer to zero should be viewed as the most positive.

For added context, we also provide the results of a simple benchmark model (denoted as "BM"), which is simply a 'no-change' forecast i.e. current quarter GDP growth is assumed to be unchanged since the previous observation.

Table 2 provides a summary of the various model performances. 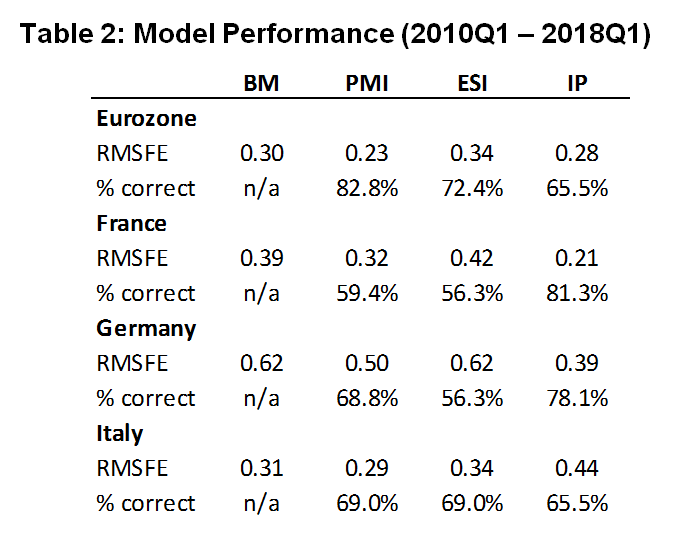 The results show that, in nowcasting terms, models that include PMI data generally outperform those based on the ESI when it comes to predicting quarter-on-quarter growth rates. This is especially the case at the Eurozone level, where the PMI-based model outperforms equivalent ESI and industrial production set-ups considerably in terms of RMSFE, whilst also registering a near 25% average nowcasting gain over the benchmark model. Moreover, the PMI model correctly forecasts the direction of quarterly growth in the Eurozone over 80% of the time (again a better outturn than seen for the ESI and industrial production).

For France and Germany, PMI-based models again outperform the simple benchmark and ESI models - and indicate the value-added of using PMI when it comes to predicting GDP growth - but it is the industrial production based models that perform the strongest in terms of RMSFE and forecasted direction (though of course the delay in the publication of the industrial production data relative ot the PMI needs to be borne in mind here). In Italy, it is only the PMI that out performs the benchmark based on the RMSFE statistic.

PMI data are timely, closely correlated with growth of economic activity and do a good job at predicting quarterly changes in GDP, adding value over and above hard-to-beat benchmark forecasting models. When conditioning for timeliness, the PMI also often outperforms other popular high frequency economic indicators.

These characteristics subsequently ensure that the PMI dataset is a vital addition to the toolkit of those who wish to track economic performance in a timely fashion.