Eurozone manufacturing remained stuck firmly in a steep downturn in June, according to the latest PMI survey data, continuing to contract at one of the steepest rates seen for over six years. Forward-looking indicators suggest no quick end to the downturn. Companies meanwhile continued to focus on cost reduction, helping push inflationary pressures lower.

The IHS Markit Eurozone Manufacturing PMI fell from 47.7 in May to 47.6 in June, registering a deterioration of manufacturing conditions for a fifth successive month. The disappointing survey rounded off a second quarter in which the average PMI reading was the lowest since the opening months of 2013. Comparisons with official data indicate that the PMI is consistent with manufacturing output falling at a quarterly rate of approximately 0.7%, thereby acting as a major drag on GDP. 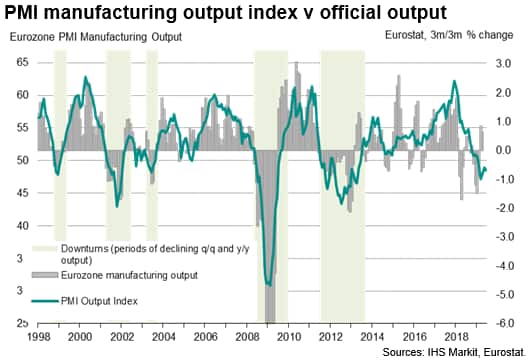 The PMI has diverged from official data in recent months, but the latter has shown considerable volatility, making short-term assessment and forecasting difficult. The three-month-on-three-month rate of change in the official data has swung from signalling a 1.5% contraction in January to 0.8% growth in both March and April 2019. The PMI suggests the official data at the start of the year overstated the underlying weakness of the manufacturing sector, but that the recent rebound has likewise sent a misleading signal of health. Importantly, what the comparison also reveals is that it would be unprecedented for the official measure of manufacturing output to not weaken considerably in coming months, given the current low PMI readings, and result in a drop in second quarter output ( this is explored more fully in our recent research note).

The downturn is also showing no signs of any imminent end. The PMI survey's forward-looking new orders to inventory ratio in fact deteriorated in June and the future expectations index remained at one of its lowest levels seen since 2012.

Although off recent lows seen earlier in the year, the subdued forward-looking indicators add to concerns about the economy in the second half of the year. A major concern is that, the longer the manufacturing downturn persists, the greater the likelihood of the weakness spilling over to services. 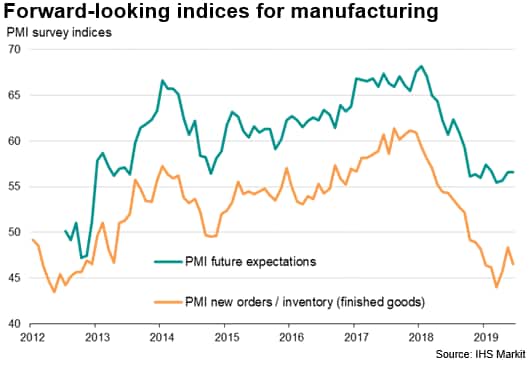 So far this year, the service sector has shown an almost unprecedented resilience in the face of the factory sector's downturn, supported in particular by consumer spending, and is expected to help sustain GDP growth of just over 1% this year. A spreading of the downturn to services would therefore raise the risk of a slide into recession. 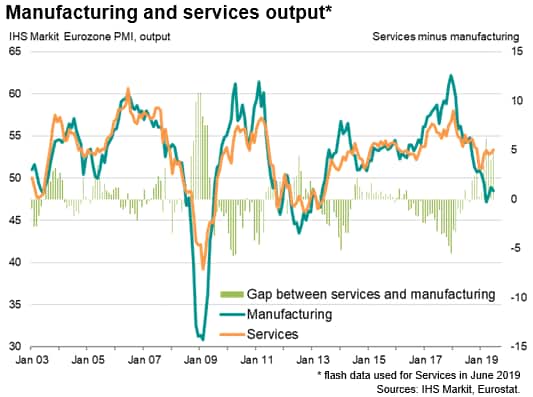 Deteriorating inflows of new work meanwhile meant manufacturers increasingly focused on keeping costs down, notably by cutting both inventory holdings and staffing levels. Stocks of purchases fell for a fifth straight month in June while employment levels were reduced for a second successive month, in what is the first period of job cutting for almost five years. 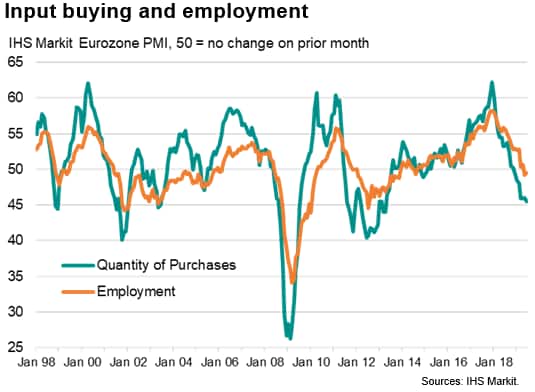 The downturn is also increasingly feeding through to lower inflationary pressures, as producers and their suppliers competed on price to retain customers and generate sales. In stark contrast to the steep growth of producers' costs and prices seen at the start of the year, the June survey showed that raw material prices are now falling for the first time in three years and that selling prices are barely rising.

A key gauge of underlying price pressures from the survey is the suppliers' delivery times index. By providing a measure of how busy suppliers are, this index gives insight into their pricing power. Whereas the delivery times index was indicating widespread supply delays and a commensurate build-up of price pressures throughout last year, recent months have seen a swing to a buyers' market as demand has weakened. Supplier lead-times in fact shortened in June to the greatest extent since 2009. In this environment, suppliers have been increasingly reported to have been offering discounts to boost sales, suggesting prices could fall further in coming months. 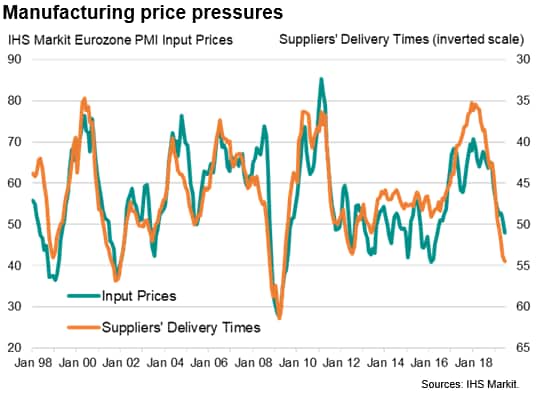