The eurozone's manufacturing recovery gained further momentum in September, rounding off the strongest quarterly rise in production since the opening months of 2018. However, the region's recovery has become increasingly reliant on Germany.

A rise in the survey's output index from 55.6 in August to 57.1 in September indicated the fastest manufacturing production growth since February 2018. The increase marks a strong turnaround from the low of just 18.1 in April, when demand slumped and many production facilities were shut due to the coronavirus disease 2019 (COVID-19) pandemic. The latest index reading is broadly consistent with manufacturing output growing at an annual rate in excess of 3%. 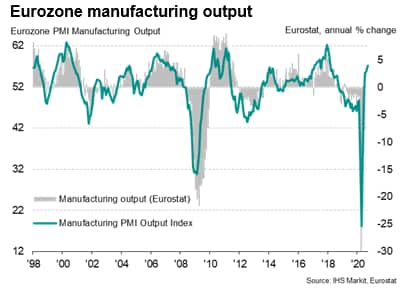 Order book growth and exports also accelerated, indicating a welcome strengthening of demand. Inflows of new orders expanded at the quickest pace since February 2018, while exports (which include intra-euro area trade) likewise surged higher and at the fastest rate seen over this two-and-a-half-year period. Given the high degree of intra-eurozone trade, new orders and export orders typically follow very similar trends. 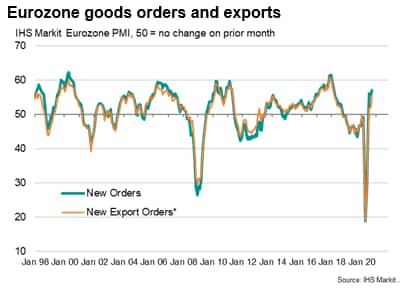 Backlogs of work, a key gauge of capacity utilisation, likewise rose to the greatest extent for almost two-and-a-half years, underscoring how output is not just rising as firms eat into pre-placed orders, but that inflows of new business are leading to further improvements in the pipeline of work for coming months. 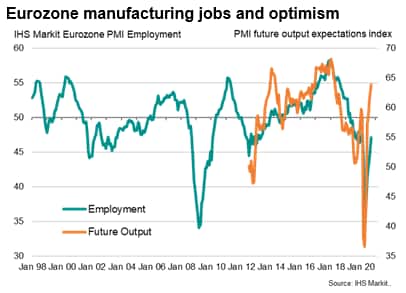 Job losses consequently eased to the lowest seen over the past seven months as firms grew more upbeat about prospects for the year ahead, with optimism returning to the highs seen before the trade war escalation in early 2018.

The recovery would have been far more modest without Germany, however, where output has surged especially sharply to account for around half of the eurozone's expansion in September. The striking gain reported in Germany contrasts with relatively weak production growth in Spain and France, offset slowdowns in Italy and Austria, and countered a particularly worrying return to contraction in Ireland. Excluding Germany, eurozone output growth would have weakened to the lowest since June. 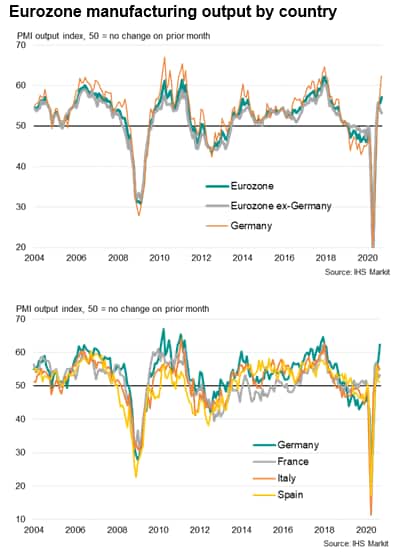 Divergent export performance explains much of the difference between national production trends, with Germany the stand-out leader in terms of export sales in September, led by a strengthening of demand for investment goods such as plant and machinery. 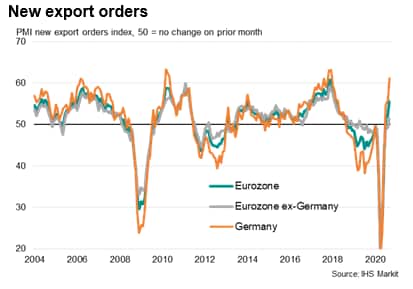 Encouragingly, optimism regarding the year ahead rose not only in Germany but also in France, Italy, Spain and Austria, hinting that the upturn could broaden out in coming months. Without a more broad-based recovery, the sustainability of the upturn looks at risk, with additional worries fuelled by rising COVID-19 infection rates. The latter currently represent an increasing gloomy cloud on the region's recovery, especially given the dampening effect on demand seen in the flash services PMI numbers in September, which showed the sector sliding back into contraction. 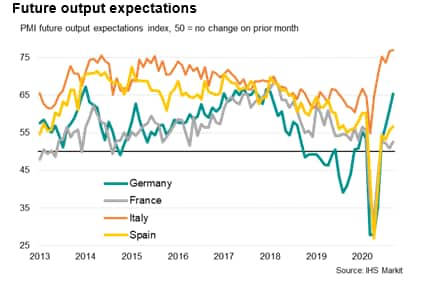